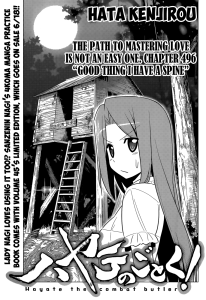 The results of the second orientation are released. Funny enough, the rankings are the direct reverse of the photo sequence we saw in the last chapter. We also only get the photos we already know ranked, with no other big surprises from other groups. A part of me thinks that some groups might not even be able to submit any photo at all.

We would all have our own reasons to say whether we agree with the results or not. I would say that the rankings make sense if we are looking for the “wow” factor in the photos. Then again, if it takes participants to harm the animals or be harmed for the “wow” factor, then Hinagiku might as well decapitate the pink dolphin with Shirosakura the moment it jumped out – or even simpler, decapitate herself. What, I thought you were looking for “wow” factor!

Another round of money game is on!

On the whole, we see more and more participants getting their hands on money. Putting the development of the rest of the chapter aside for a moment, we know that Izumi, Chiharu, Kayura and Isumi would all join the “rich club”. Hayate and Nagi would not have much fresh cash to pocket, but at least they have the night’s cost covered. As for Kotetsu… do you think Hayate would be kind enough to give him a bit of the remaining 100K yen?

Yukiji – I mean, Yukiko-chan – gets the Ushijima Card. We all know her, so there is a high probability that she would loan money with the card on the hotel (reasonable) and alcohol (not reasonable). She might be a fierce competitor, but I just don’t see that she has the self-discipline to behave herself at night.

Not the face of a bad loser.

Yet the biggest loser of this orientation seems to be Hinagiku, who didn’t win any new cash while burning almost all of her previous prize money. How on earth did she manage to spend so much money in 26 hours is very head-scratching. Maybe she decided that she has had enough of Risa spending her money like crazy, and that she would be better off without any “advantage” into the next orientation – sure enough, the next time we see Risa, she is tagging along with Izumi.

In any case, Hinagiku shows generosity to Miki and Aika by offering to pay for the rooms for the whole team. There is a reason for her in-story popularity: Hinagiku genuinely cares about her friends, worrying about them and taking care of them when they are in need. We should learn that popularity doesn’t really mean a pretty face… or big boobs.

On the other hand, Miki and Aika both show their honour by not accepting Hinagiku’s generosity. As explained by Aika, they are very aware that Hinagiku has already done so much for them – remember, if Hinagiku hired locals to take her picture, she didn’t actually need the other two girls on her team – and they had no reason to ask her to do any more.

Miki then makes the odd move of retiring while suggesting that Aika has enough spine to stay overnight in the forest. I mean, it makes perfect sense for Miki to retire – if you can’t stand living in the forest, so be it – but I have no idea why she is cornering Aika. In fact, Miki is even stopping Hinagiku from – cough, popularity, cough – offering to stay with Aika in the forest. The problem for Aika is that, now that Miki has said that she has the spine to do it, she really cannot say that she doesn’t have it. So, Aika is somewhat forced by Miki to make a choice which she absolutely doesn’t like.

Unfortunately for both Aika and Miki, it turns out that Izumi is playing the , billionaire, , philanthropist by paying for everyone’s hotel room. It means that MIki has given up for nothing, and that Aika becomes the only person who stays in the forest for the night. Maybe Izumi should have conveyed her message earlier…

This is pretty scary, you know.

Anyway, Aika is left alone in the forest, and is forced to face the one thing she has complained about for the entire day: bugs. Now, the whole thing might seem a little too dramatic for us, but let’s not forget that this is all about Aika’s fear. If she decides that she would cry seeing a spider, then she would cry.

So this turns into a battle between Aika and bug for a few pages, featuring the motivation (?) by Mr. Fiancé. The good news is that Aika wins the first round, but the bad news is that there are a lot more rounds to come…

Meanwhile, Hayate stays with Nagi and Kotetsu in the same room. For whatever reason, Hayate decides to betray Kotetsu and presses on his Completer while they are shaking hands. Hayate then proceeds to announce that he is going to “settle this tonight”. Presumably it means that Hayate is going to ambush everyone else in order to make sure that it is either Nagi or him could win this competition, and then… they might have to settle this too between mistress and butler.

This is more villain than hero.

Finally, there is someone who plays the “dirty tricks” I have suggested in my Ch. 486 Review. Now that Hayate has played both “deception” and “betrayal” on Kotetsu, he might now go out and do some “violence”. To me this is quite unfortunate: granted, Hayate is never the nicest person of the series, but if he starts knocking people out of the competition with his “dirty tricks”, then there could be a lot of angry people who would never talk to him again.

Considering Hayate’s reputation as a “natural gigolo”, this might not be that bad…