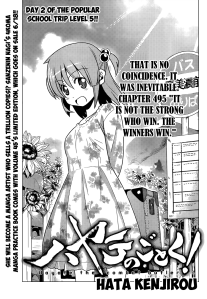 Our lucky girl is going to shine!

While I have described Izumi as a “spoiled child” in this article, Hata seems to prefer calling her a “good girl”. Yet as I read through the elaboration, I found Hata highlighting more or less the same points as I did, so…

Anyway, it has now become clear that Izumi has not been deliberately left on her own. On the contrary, she has excluded herself from the crowd due to her complacency. Instead of using the 1-hour preparation time to form teams with her friends or at least try to find out what was going on around her, she simply retreated to napping. As she was not seen by anyone, of course nobody would form a team with her.

In other words, it is not that people consciously abandoned her because of her clumsiness or undesirability – at least Hinagiku was worried about her. 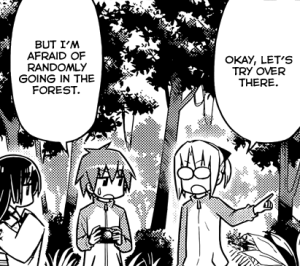 Hinagiku is indeed teamed with Miki and Aika, which is pretty much expected as Izumi has not been available. Meanwhile, Isumi is shown to be in Chiharu and Kayura’s team, which is a bit of a surprise – then again, the three of them at least had been to Ise together, so they are at least acquainted enough to work together. Yukiji remains a curious case: is she working on her own, or does she team up with two random people, whom would not have the slightest of idea of her true identity?

As we can see, the teams employ different tactics to find the “unusual animal”. Team Hayate-Nagi-Kotetsu rely on Kotetsu’s expertise in photography and his choice of camera (which comes with a handy GPS feature). Team Hinagiku-Miki-Aika take advantage of Hinagiku’s money from her previous victory and hire local people – presumably in deciding on and locating the “unusual animal”. Team Chiharu-Kayura-Isumi use Isumi’s mystical power to summon animals instead of finding them, but arguably have only summoned the dangerous instead of the unusual. 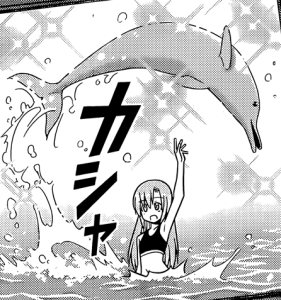 In all fairness, this is a wonderful picture.

Different tactics, of course, result in different kinds of photos. Hinagiku’s team take a picture with Hinagiku and an Amazon river dolphin, which is beautiful and joyful. Yukiji (in the name of Yukiko) submits a photo of her fishing up a giant pirarucu, and my guess is that you really need a teammate to capture this moment for you. Hayate gets desperate and assaults a crocodile (remember, he looks for the crocodile, not the other way round), giving the photo a “breath of the wild”. Chiharu takes the orientation to a whole new level by being eaten by a jaguar, which makes a horror photo.

All of the photos involve literally “contacting” the wild animals, with two of them hurting/killing the animal and one being hurt by the animal. If I were the judge, I would disqualify Hayate and Yukiji’s photos, because it is a very bad practice to hurt wildlife just because you want to take a good picture. Good “animal watch” photos should involve as little human interference as possible, and in this sense even Hinagiku’s photo has to be disqualified. As for Chiharu’s… well, falling prey to a jaguar doesn’t really count as “interference”, does it? 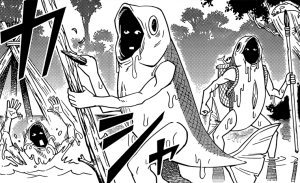 Can these be considered “animals” at all?

Anyway, while teams are trying to take pictures with a “wow factor”, Izumi decides that the only thing she could do is to take photos of fish. The fish she ends up taking photos of, however, turns out to be the “promoted” fish she created back in Ch. 447. These creatures have somehow made their way to settle in the Amazon, and honestly… this has to be the most unusual animal anyone could come across.

Here we are reminded of the “Izumi’s style”. While I think it is a bit of a stretch to suggest that this implies the outcome of the “ship war”, I do think that it reflects Izumi’s fortune as a whole. It is true that Izumi is not a competitive person. She doesn’t have any obvious advantage that can help her with any competition either. Yet with her quiet and humble way of living, coupled with the bit of luck that always seems to be with her, she would turn out just fine.

Izumi is not here to fight a war. Yet if you think she would be some random casualty, you would be quite wrong.