The nightlife of an otaku.

After a whole day of event, we are finally given another good look at the Completer, so I think it is time (no pun intended) for us to update certain figures. Unfortunately, in typical Hata fashion, there are glaring mistakes.

You have one chance to guess what was wrong with the above conclusion. Tip: there should be a total of 33 contestants just before Kotetsu was dropped out.

A little girls’ talk at night.

In the previous chapter, we learned that Izumi was paying for 25 people. It means that she is not paying for 8 other people. As Team Hayate (3 people including Kotetsu), Team Chiharu (3 people) and Hinagiku all have some money to spend, they should be fine without Izumi’s generosity. The problem is Yukiko-chan: as she only has the Ushijima Card, she wouldn’t be able to stay at the hotel without getting a “loan” with the card. It means that she would be having a rather tough debt soon enough. This might motivate her to do better in the remaining orientations, I suppose…

Anyway, Hayate finally decides to get all serious, and start knocking everyone else out of the competition this night. Considering that this is the first time 1) everyone is in the same hotel, 2) everyone has their single room, 3) there is no men in black watching, Hayate’s decision to take action this night is tactically correct.

People might scratch their heads as to why Hayate did not drop Hinagiku out when she lost consciousness in the sauna. I think there are at least two very simple reasons: first, Hayate simply panicked too much to think of retiring her; two, Hayate didn’t want Hinagiku to be rescued naked by men in black – remember, her clothes were still wet because she fell into the lake. Either way, let us not fool ourselves into thinking that Hayate would never seize a chance to drop Hinagiku out, as she was also his “enemy” after all. 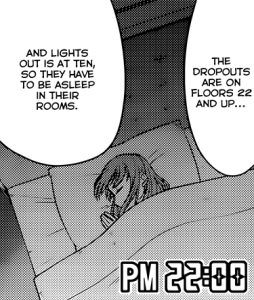 It is not that easy to be a dropout.

It is revealed that the dropouts would also be sleeping in the same hotel as the remaining competitors. As the rules stated that they should remain in the hotel during the day (just don’t ask me why Risa got to co-commentate the second orientation with Wataru and Saki…), apparently the dropouts would take every single air trip and then be locked in their hotel rooms. This is utterly boring, so we might want to “forgive” Miki and Risa for hanging around with Hinagiku and Izumi until bed time – 10 pm, as we are told.

Hayate waits until midnight to take action. We are told that it also means there are 145 hours left in the School Trip. This number is highly suspicious, because just after Hayate drops Koutarou out, Hinagiku checks her Completer again and we learn that there are 143 hours 52 minutes to go. Now wait a minute: so it means Hayate has taken a whopping 1 hour 8 minutes to drop one competitor out!

If we trace every activity of the day on a table, back to when the students departed New Zealand, it would look like this:

Before I go on, there is a bit of rectification of my own account: in my Ch. 494 Review I based my calculation of all the time issues on the assumption that the group were in Brasília time zone (UTC-3). However, the title of Ch. 497 makes it clear that they are actually in Colombia, with the time zone of UTC-5. So instead of a 15-hour time difference, we should actually be talking about a 17-hour one. It means that the time in New Zealand would be 9:00 am as the students boarded the plane to Colombia.

The strange thing is that it also means that at 7:00 am in New Zealand there would be 179 hours left, so at about 7:21 pm on the previous day – when Hayate saw Hinagiku completely naked – there were 190 hours 39 minutes left. As you would recall, this is one hour short of what we saw on Hayate’s Completer in Ch. 491.

If we give the hour back to the schedule, it would become this:

This shows, once again, that Hata doesn’t seem very careful with his timeline, and I am afraid that readers are as likely to simply ignore such “trivial” things. Normally we really shouldn’t bother too much, but if Hata really wants to highlight the “time” element of this arc in 24-ish style, then he really should be more careful with the time marks.

Anyway, what has been done is done, and Hata only has two options: either he clarifies the time issue in future chapters with another glance at the Completer or a narration box, or that he simply ignores any mistakes and gets on with it. So far the second option wouldn’t really be that bad, because all in all it is just a one-hour difference. If this is the case, then I might as well stop tracking all the time stuff.

Failed from the start…

In any case, Hayate’s “mission” does not really go well, as accidents happen here and there. In fact, it could be less “accident” and more “miscalculation” on Hayate’s part, because the “accidents” all come to the fact that people are not that fast asleep as he has expected. Koutarou is more or less waked by Hayate’s movements, Chiharu cannot fall asleep this “early” and Hinagiku – we will come to her later – hasn’t even go to bed. Maybe Hayate should have waited an hour or two.

Hayate ends up knocking out Koutarou by force (violence!), but his “mission” is still easily accomplished. In Chiharu’s case, it is more complicated as Hayate may not be able to bring himself to attack a girl. His inability to act quickly, or even to run away quickly, gets him into even more trouble: somehow Hinagiku comes to Chiharu’s room, looking for the “criminal”.

She is having fun, isn’t she?

Somehow Hinagiku seems to be having fun with hunting down the “criminal”. Given that she is depicted to be such a ridiculously perceptive person (just not on love issues…), you really have to wonder whether Hinagiku has already figured out who the “criminal” is. Judging by her mischievous expressions, it is likely that she already knows.

The thing is, at this stage there should be very little evidence for Hinagiku to figure out who the “criminal” is. It could be anyone out of the 30 other remaining competitors, but Hinagiku seems to know from the beginning whom she should suspect. In fact, she goes as far as to correctly guess the next “crime scene”, and she effectively has Hayate cornered – not unlike Hayate cornering her back in the sauna.

I will bet you anything that she is bluffing.

If we agree that Hinagiku already knows that she is specifically hunting down Hayate, then we should rest assured that she doesn’t really mean to turn Hayate to the police. I think Hinagiku merely sees it as a cheap hand to defeat other competitors by “murdering” them in their beds, instead of fighting them fair and square. “Nobody plays dirty tricks under my watch,” I could almost hear her saying. Most likely, she would just personally punish Hayate a bit for his “misbehaviour”, and then forces him back to his room. Her words to Chiharu are most likely just an attempt to intimidate Hayate.

Not that turning Hayate to the police is something particularly unjust. After all, this guy has illegally entrapped Kotetsu (seriously, have you ever seen so much fear in his eyes?), trespassed into two rooms, assaulted Koutarou occasioning actual bodily harm, and sexually harassed Chiharu. If he is turned to the police, it is quite likely that he would be charged of all these criminal offences.

Even Hayate himself seems to realise that he has done something inappropriate, although this point has only come to his mind when things are not going well for him. Indeed, we never saw him paying the slightest attention to “criminal offence” as he boasted his plans to Nagi, or when he dropped Koutarou out. It simply looks as if he has never considered the possibility of his plans going wrong. Why is this so?

I always consider Hayate to be a little reckless. Yes, he has done thorough research before coming to his plans, but there are also a lot of assumptions in his plans. Yet if you point this out to him, I expect his reply would be “It is okay. Things will work as I have planned.” Indeed, he tends to downplay all the negative issues of his plans, including legal ones, with such recklessness. Naturally, when things do not work as he has planned, all the negative issues emerge at the same time, and his only response could be “Oh, crap!”

In the next chapter, Hayate and Hinagiku could be facing each other for the second time in as many nights. It surely looks exciting, but I am not entirely sure if Hinagiku could come out on top of this “Hayate vs. Hinagiku” battle. Recently she doesn’t have the upper hand against the person she loves anymore, so…

On some lighter notes, both Aika and Chiharu surprise us in this chapter. Aika becomes better and better in her battle against an entire army of spiders, and indeed she could start beating/killing them instead of just throwing them out of windows. Chiharu, on the other hand, shows a rather… matured side by clicking on the 30-second trials of adult videos. I actually half-expected her to rent the full videos, but I guess she is not that eager in having everyone find out she has watched adult videos when she checks her bill the next morning…