I hate (spelling) that name.

Sometimes I wish that I have implemented more functions into this blog, one of them being bookmarking certain chapters which can be deemed “essential readings” in order to understand the plot(TM). I am certain that WordPress offers something like this, I just have never used it before, and I might have to regret this…

You see, every once in a while, Hata would release a crucial chapter that contains so much important information, which are so crucial that missing any one of them would make you look like an idiot. Yet these crucial chapters are buried within many other important chapters and many more other filler chapters, to the point that while you might not miss any crucial chapter, you are almost bound to forget about at least some of them. Forgetting about any important information makes you look like an idiot just as much.

Something has to be done about this. I really need a way to shelf these important chapters, or at least to list all the important information in one post. Unfortunately for me, it might mean I have to go over 545 chapters published over 10 years to pick up every single one of them. It would have been a lot easier for me if I had been doing this bit by bit, chapter by chapter, over the last six years of blogging.

Now this is scary.

Take the very first page of this chapter as an example. While it is abundantly clear that Yukariko and Himegami gathered around the coffin at the Violet Mansion, I have quite forgotten why the coffin was there in the first place. Has it even been mentioned or addressed? I don’t really know. Now I look like an idiot.

In any case, we can now confirm that both Yukariko and Himegami met Orumuzuto Nadja atop the coffin at the Violet Mansion. Apparently Orumuzuto Nadja (can I just call her “goddess” hereafter…?) had been calling for Yukariko to save her, and the young girl brought Himegami with her.

The next question is what Yukariko should do to “save” the goddess. This question could be important, because Himegami – who was known as one of the Royal Power seeker – was standing right there. If the goddess told Yukariko what to do, Himegami would hear it; if the goddess did not know how she could be saved either, Himegami could make suggestions that sounded like legitimate ways. Either way, Himegami would be able to do a lot of manipulations, bringing the Royal Power to himself and – maybe or maybe not – causing the early death of Yukariko.

She has a much more solid form here.

Then we receive even more elaborations on how the Royal Whatevers can be linked together from – big surprise – Nagi. I can’t even understand why the goddess would choose to reveal such important secrets to an even smaller girl than Yukariko. Then again, Nagi is the main heroine of the series, and it is painfully clear that supernatural beings just like pushing her to glory, so that’s it.

In all honesty, this is fair and square. If the Royal Power is this powerful such that it can grant you any wish, some kind of very heavy price must be set to prevent people from abusing it. You can even say that this is some kind of character test: greedy and foolish people will either die early or be locked out of reality forever, while wise and good people would be safe from all of this rubbish.

This revelation does confirm that Athena used the Royal Power once. It also means that she must have invoked the Royal Power to make a wish. I am not sure whether her wish has been addressed in a previous chapter. I now look foolish again. 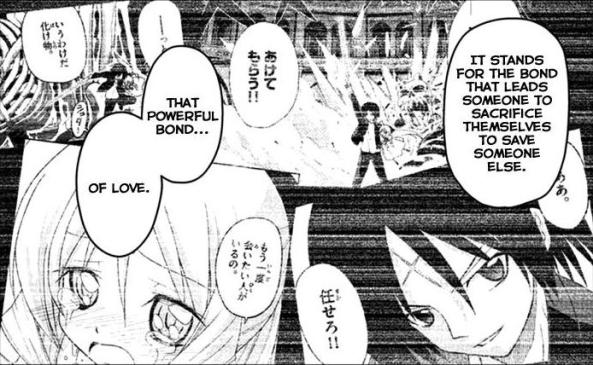 We would remember that Nagi once called the Royal Jewel the “stone of bonds”, and we now know why: the stone basically means that you get yourself stuck in the Royal Castle, so that the one who loves you enough would sacrifice his/her own life to save you. While this sounds very romantic, I am not sure if Ikusa qualifies as a good example. To me he is just that kind of hot-blooded idiots who would rush to save a cat from Hell if it meows from within. No, Ikusa did not save Athena from the Royal Castle because he loved her – he didn’t even know her, remember. That being said, if Nagi’s words means that the Ikusa-Athena ship is set for sailing, then I am game.

Meanwhile, Maria looks as if she has had enough of the misunderstanding between Hayate and Nagi, and she would be doing something about it. Will Maria becomes the main villain in Hayate and Nagi’s love story? We’ll see but taking up a role like this is almost always a popularity bomb – not that Maria is that popular any more, anyway.

Newsflash! Isumi checks in and checks out in four pages. She is here to help Hayate and Athena break into Hisui’s house, and that’s that. As calamariluqe pointed out in last chapter’s review, Isumi has been used as a plot device, and it shows in this chapter: Isumi is here in this chapter only to do the unthinkable of destroying Hisui’s front gate, so that Hayate (main character who is supposed to be a role model for kids) and Athena (GODDESS!!!) wouldn’t have to do it. You can almost imagine that Hata has now employed Isumi as some kind of mob to do all the dirty works nobody wants to do.

At the end of the chapter, Hisui proves Halloween is coming by popping up with a sword, a huge scar on her face and a big evil grin. Funny enough, my displeasure with Hayate is so much that I am going to cheer for her to cut a piece of Hayate’s ass into even smaller pieces.