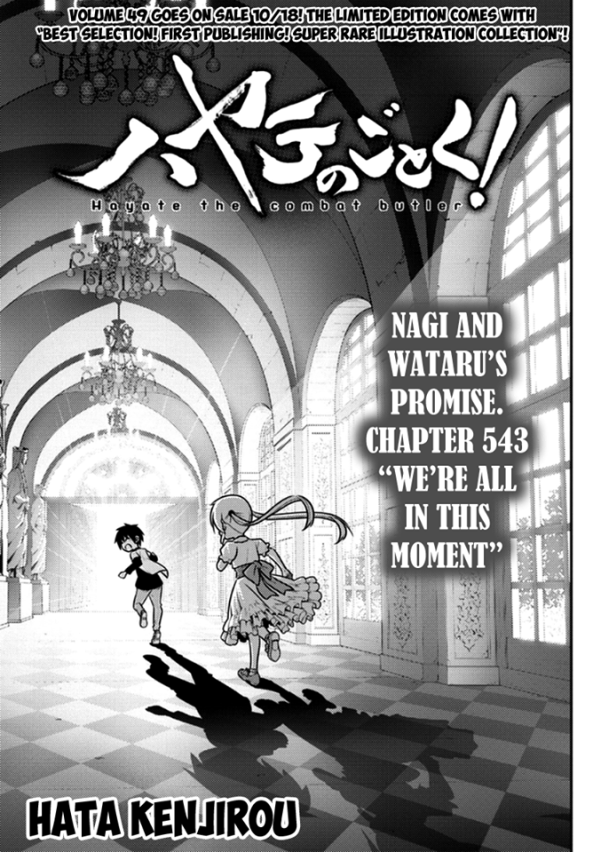 They might argue, but they have good interest of each other in their hearts.

If this chapter has proved something, it is that Doughnut Gunso is a genius. I will use this Chapter Review to offer two reasons for your consideration.

The first reason relates to the following quotes from my Ch. 542 Review: “[Saki] went as far as bringing up something (to the readers) that nobody cares about nowadays: the arranged marriage between Wataru and Nagi. I am not entirely sure if this engagement has been cancelled, but even if it hasn’t, it doesn’t seem like either Nagi or Wataru were serious about it as they both had their eyes set on someone else.“ 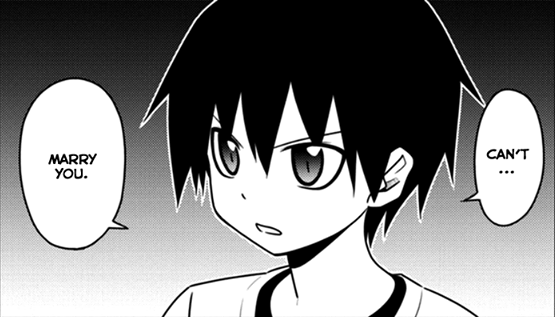 Okay, my question answered there.

This is what exactly has been addressed in this chapter. As it turned out, Wataru and Nagi did a bit more than just talking about the 2016 Godzilla movie; I don’t know if he also felt that he was talking on such good terms with Nagi (over the movie) that he had to clarify their relationship, but here we have it. Wataru mentioned the arranged marriage, Nagi said she wasn’t serious about it, and Wataru said that this arrangement would be cancelled because he had his eyes set on someone else.

Farewell doesn’t always have to be sad.

Let us also note that while Wataru and Nagi technically part ways in this chapter, they arguably end up in even better terms than before. Wataru promised Nagi that he would support her dream as a mangaka by selling her manga in his store, while Nagi did not make fun of or take offense at this suggestion. In fact, her response makes me think that she was quietly appreciative of Wataru’s support. And man, was Wataru so cool in this chapter.

The funny thing is, Hata seems to have quite a way with sinking ships. We have already seen quite a few cases in this series alone that people say goodbye to each other because they find out their relationship is not going to work: Hayate-Ruka, Wataru-Isumi, and now Wataru-Nagi. Hata managed to write these “breakups” in a heartwarming and mature way, and they leave a great impression with me. That being said, these cases only highlight how over-the-top the Hayate-Athena breakup was. For that particular one, my only comment would be: 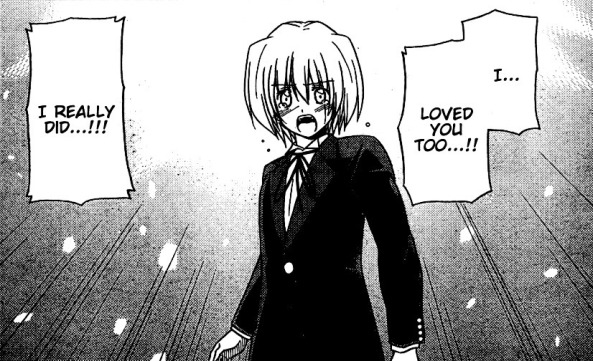 Even if you did not care about Wataru and are ready to shout “Move on to A-tan now!”, Wataru did make significant contribution to the plot(TM) by giving the King’s Jewel he has kept to Nagi. It is safe to say that Wataru did not know much about the Royal Whatever, and he meant well as he gave the stone to Nagi, but his action might have brought about a new dynamic to the inheritance race. Could it be that while Hayate blindly locks horns with Hisui and Yozora, Nagi then quietly gets the job done and gets the inheritance? We’ll see.

Okay, back to the Doughnut Gunso appreciation. The second reason that Doughnut Gunso is a genius relates to the following quote from my Ch. 538 review: “Meanwhile, Machina is becoming a huge disappointment.” The key here is not that Machina lost his fight against Yozora, but that he failed to run away with his stone after needlessly exposing himself. 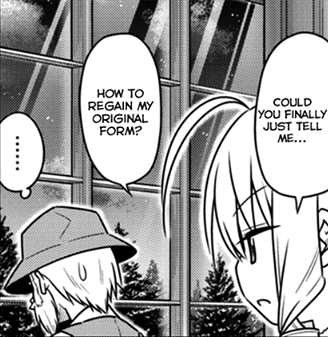 Granted, this is about the only stone Hisui would be getting – Hayate still had three stones with him, while Nagi has just received one from Wataru, so in terms of stone possession it was Nagi: 4, Hisui: 1 (those that work, anyway). However, in this chapter we finally understand why the particular stone Hisui got was so important: it is the key for Athena to return to her true form and power!

People are hugely disappointed because they are not going to see Athena (big) any time soon, and this is because of Machina’s own stupidity which led to a total failure at his job. Doughnut Gunso successfully guessed that Machina’s failure would lead to a huge disappointment. Dougnut Gunso is a genius.

Now, the whole King’s Jewel thing is getting pretty ridiculous, honestly. We would recall how Athena got turned into her little form in the first place: Aika, under the order of Mikado, threw a King’s Jewel at Athena (big) in Greece, and that was it. Now Mikado said that Athena (small) would only need to break the stone to become Athena (big) again, it really begs the question: why turned Athena (big) into Athena (small) in the first place? 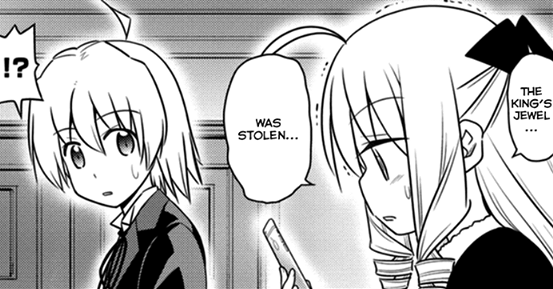 Technically speaking, it was “robbed”.

Back in Ch. 448, it was suspected that Mikado was trying to stop Athena (big) from screwing up his plans. Yet about a hundred chapters later, I still cannot quite understand what Mikado was up to. What has he done other than restoring Nagi as a potential heir, being threatened by Hisui, and setting up a game for finding a key that was lost in the Royal Garden, hence getting people to try to find the path to the Royal Garden for him?

Oh  yeah, maybe that was it.

Yet as the Royal Whatever package goes, if you talk about the Garden you need to talk about the Power as well. The thing is that Mikado – arguably the only person who a) may know about the Power and b) was functioning perfectly – seemed determined to keep his mouth shut tight. It doesn’t seem like we are going anywhere with this.