Let’s get one thing clear first: this is going to be a very short Chapter Review.

I think you have already observed that as of recently, Doughnut Gunso doesn’t have much to say at the beginning of a new arc or saga. The reason is very simple: in the earlier years of my blogging, Doughnut Gunso has proven himself to be highly incompetent with guessing. It turns out that I am quite often among the last people to figure out where Hata is heading with his stories, and my guessing works are almost always done just to embarrass myself. As such, I have learned to give up about guessing and just stay with commenting and analysing.

Then again, given Hata’s pacing, there isn’t really much solid information to analysis at the start of an arc. With no guessing game to play and no material to analyse, Chapter Reviews are bound to be short.

Take this chapter as an example. I think the general consensus is that we are heading into something big: what with Hisui, Yozora, Himegami and all the people who stop hiding behind the curtains and actually do something. Yet while Hisui and Yozora make their long-awaited return – in Hisui’s case it might technically be a “debut” because we never saw her face properly before – they have done nothing other than making a return. With a combination of less than 10 lines and with next to zero substance, what the heck am I supposed to analyse?

The only thing I could say is that it looks like Hisui has a very nasty scar around her right eye. That thing, combined with her facial expression, seems to give us an impression that she is mentally not very stable. From my perspective, it is as if Hisui would jump at me and bite my eye out at any time. If Mikado happens to share my perspective, I guess I can understand why he is seemingly so afraid of her.

Mikado seems to be particularly weak with two girls: Maria and Hisui. In Maria’s case, Mikado acts like a child begging for candies from his mother, who isn’t just giving them away easily. Their interactions are more playful than serious, and both parties seem to accept this as their way of entertainment: it won’t stop, but it doesn’t have to be stopped either. 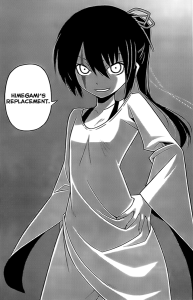 This is what they call “nightmare fuel”.

In Hisui’s case, on the other hand, Mikado seems to recognise that it is all serious business. In fact, it appears that Mikado doesn’t want anything to do with her, to the point that he cannot even decide to name his successor just because Hisui is one of his candidates. Think about this: Mikado doesn’t want Hisui as his successor so he would avoid naming her, but he considers himself to be in big trouble if he doesn’t name her. The only way out for him, naturally, is to let every candidate compete for the inheritance. At least Mikado still has a way to deny Hisui the inheritance without outright rejecting her, while making things look “fair”.

You see, if Hisui is the reason behind Mikado designing an entire “game system” which has been influencing the plot for 10 years, then Hisui is indeed a very horrible person. Then again, things could be more complicated than that, but this is what I can tell from what we have been given. We will need to see more of Hisui, Yozora and Mikado to find out more.

I told you that this Chapter Review is going to be short.