The undeniable badass who cannot be underestimated.

In the previous Chapter Review I suggested that Hinagiku may have already figured out that Hayate is ambushing Chiharu. However, the action she takes in this chapter would be quite weird if that was her conclusion.

The thing is, it is very dangerous to start casually explaining why you are visiting the room if you are fully aware that there is a threat. The first course of action is to eliminate the threat – or even wiser, to get Chiharu out of the room – before taking your time for exposition. As Hinagiku isn’t in a hurry to take any action at all, it is quite likely that she doesn’t know for sure that Hayate – or anyone else for that matter – is in Chiharu’s room, but for some reason it is the room Hinagiku has decided to visit.

There is no need to blush.

Unfortunately, it is highly unlikely that we would find out what Hinagiku has been thinking, because the moment she gets to the key point, she is interrupted by Chiharu. Let’s not blame Chiharu for this: after all, she is still half-naked, which is still very awkward even if she is just facing another girl. Hinagiku seems to be totally oblivious about this, which makes her just as bad as, you know, Hayate.

Even Hayate seems to get lucky from time to time. Although he is totally cornered by Hinagiku, he is still somewhat saved as there are more ambushers. As we are informed, Yukiko-chan – officially revealed to be Yukiji – has teamed up with Sonia to take out contenders.

The deal between them is a curious one. We are told that Sonia owes Yukiji a sizeable mahjong debt. While it makes sense for Yukiji to forgive the debt in exchange of Sonia’s help, giving the “nun” half the prize money seems to be a little too generous. In fact, I would expect Sonia’s “reward” for helping Yukiji to come in either the forgiveness of the debt or half the prize money, not both.

Anyway, they are not the end of everyone’s problem, as a large team of terrorists marches into the hotel. You might see the irony here: a major reason that contenders fought so hard during the day is to get to stay at the better hotel, so to avoid meeting terrorists at night. Now terrorists rush into the better hotel, putting everyone at harm, while Aika in the forests seems to be pretty safe from terrorists – although she has to put up with spiders.

What kind of terrorists would say they are terrorists?

I am not sure what the terrorists want from the hotel, but terrorists being terrorists seem to have nothing else to do other than the regular terrorist stuff. Anyway, it doesn’t look like a part of Kananiwa’s plan for the School Trip, because as we can see later in the chapter, the men in black are in real panic as they gather the students outside the hotel. I think this at least mean that the men in black have not been briefed about the situation beforehand.

Tsugumi makes her reappearance, once again serving her sole purpose in the manga thus far: saving Nagi. Thus far she seems to be a genuine ally of Nagi, so our lady seems to have every reason to trust Tsugumi. Let’s just not try to guess why Tsugumi knows to follow Nagi from New Zealand to Colombia, because we are killing brain cells for nothing.

Back in the hotel, Hayate takes the moment of chaos to flee through the air vent. It is now confirmed that Hinagiku is 100% certain that the one who has intruded into Chiharu’s room is Hayate, thus her calling at his back. This time, though, there could be a legitimate reason that Hinagiku could be sure it is Hayate: his scent. Given that Hinagiku is a very sensitive girl, she might have picked up Hayate’s scent from the corner he was hiding.

Oddly, Hinagiku seems to be extremely obsessed with catching Hayate by herself. If her objective has been to ensure Chiharu’s safety, then the goal has been achieved with Hayate fleeing the scene. Yet Hinagiku goes as far as to chase Hayate into the air vent, thus we have a good look at his piece of ass. 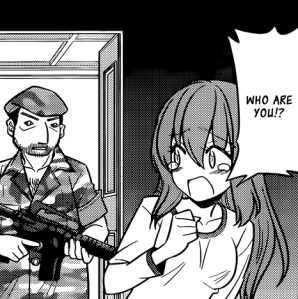 I have the exact question for you, miss.

On the other hand, Yukiji is acting perfectly like herself at the situation. On the one hand, she fends off terrorists from a student, who resembles… I don’t know, Kohana Rin from Sore ga Seiyuu? On the other hand, she deceives the student and presses her Completer by pretending to check if she is hurt. I think this incident perfectly explains the personality of Yukiji: she is overall a good and responsible person, but she would also do anything that fit her own agenda once she solves the biggest problem.

So, with most people evacuated from the hotel, only Hayate, Hinagiku, Chiharu (if she is still fine), Yukiji, Sonia and the terrorists remain. Who would “survive”, and who would be knocked out? Let’s see.