Hinagiku turns out to be the girl who collapses in front of Hayate for the most times.

Sometimes I have the feeling that, whenever she is with Hayate, Hinagiku is the incarnation of Murphy’s Law.

Let us recall that Hinagiku did not enter the “sauna battle” against Hayate because she wanted to win. She did it only because she was “naked” (I wouldn’t say a body that is wrapped by a towel “naked”, but whatever), something she did not want Hayate to see.

Yet after a long and meaningless battle, Hinagiku finally passes out and her towel is loosened. The result is that she has absolutely no control over what she would not allow Hayate to see, meaning that she actually has her entire body exposed. On top of that, she has wasted time, and she has overloaded her body with heat and dehydration.

Now THIS is what we call “naked”.

Once again we could see Hinagiku complicating things with her over-the-top shyness and inability to think when she is embarrassed. As in most cases, her embarrassment is unnecessary, as she is arguably making too much of any possibly awkward situation, and her effort to save herself from an embarrassment always makes things worse.

Arguably, as Hayate has put a blanket over Hinagiku properly, there is no need for him to blindfold himself. Most probably, the blindfold is Hayate’s statement to Hinagiku that he hasn’t seen anything of her. On one hand he is clearly taking care of Hinagiku’s feelings, because he already knows that Hinagiku would be upset if she finds out she has been exposed. On the other hand, Hayate’s “statement” can be seen as a attempt to save himself from Hinagiku’s wrath because, well, he has suffered a lot of her wrath already. 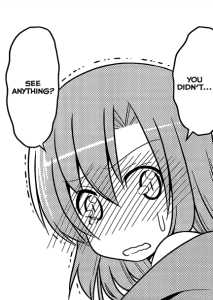 Unfortunately, his “statement” is not working because Hinagiku presses him to confirm if he truly hasn’t seen anything at all. Fortunately, Hinagiku’s reaction is not wrath toward him, but the blaming of herself. which is fair enough. We would not want to see Hinagiku irrationally blaming Hayate for what in the end is not his fault – although it is still a mystery that he didn’t even bother to check if anyone was already in before entering the sauna.

In any case, it can be said that Hinagiku deserves her humiliation because of her over-the-top shyness. Yet being seen naked by Hayate is still far from the very worst scenario. Hayate could be dense, but at least he cares about Hinagiku’s life (no kidding) and he is trying to restrict his dirty thoughts (if any) about her. At times like this, Hayate’s denseness is welcomed. 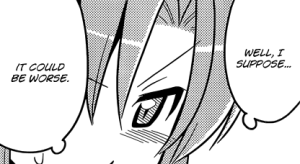 Your “worst” is just Hayate, so chill.

Arguably it means that Hinagiku can look for the silver lining behind her humiliations. Hinagiku’s shyness offers her a very powerful self-defense mechanism which suggests that any embarrassing encounter is the end of the world and makes Hinagiku do stupid things. Yet while Hinagiku’s self-defense fails almost every time, she also comes to realise that her embarrassments are not that bad. In the ideal case, Hinagiku can gradually ease out her excessive shyness and stupid decisions.

Say what you want about Hinagiku, but an undeniable fact is that she cares about Nagi. In this chapter we see two instances of Nagi being discussed, both are initiated by Hinagiku. She could be Nagi’s love rival, but she is also an “asset” to Nagi because she would constantly remind Hayate to do his job as Nagi’s butler. An example could be found right at the end of this chapter: Hayate has assumed it is alright for Nagi to go with Tsugumi, but now that Hinagiku has confirmed that Tsugumi is not a Hakuou student, Hayate would have to resume his duty pretty soon. 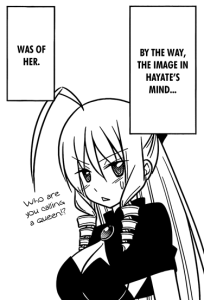 In China, they call her a goddess.

Speaking of love rivals, Hayate has unintentionally brought Hinagiku’s biggest love rival into the discussion again. It is interesting to note that Hayate hardly ever mentions anything about Athena unless he is with Hinagiku. If we argue that Athena remains Hayate’s only one true love up till this point, then somehow Hinagiku remains the only girl who is getting direct information about this.

Funny enough, this time Hinagiku does not think of Athena, but Nagi. After all, over the Athena saga (especially in Ch. 240), Hinagiku should have made the connection that the “evil queen” – her comment on Hayate’s first girlfriend – was Athena. If there is any “queen type” Hinagiku knows about, then it should be Athena, not Nagi. Yet in a very strange twist, Hinagiku is now considering the possibility that Nagi could be the type Hayate may fall in love with. We don’t know what this discovery would do to the Nagi-Hinagiku dynamic, but bit by bit Hinagiku is becoming less clueless about the love battle she is in.

I guess an argument is settled.

Very little is known about Nagi and Tsugumi at the moment, but we have found out why people keep giving up on the school trip. The thing is, it is not exactly about doing physical harm on the participants, but mental. It has to be said though, the trick is very, very smart.

By “imprisoning” the participants and promising them much better (that’s an understatement, but whatever) shelter and food, giving up the competition becomes a very easy choice to make. Let us not forget that most Hakuou students come from very wealthy families, so while an extra 150 million yen would be nice, it doesn’t really worth the horrible experience in “prison”. 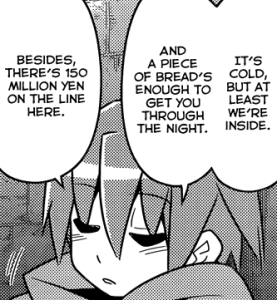 Yet none of our major characters are dropping out yet. Kayura makes a good example of enduring the night in “prison” by going to sleep. If the skiing they had was anything to go by, they will hopefully have still have fun and excellent food during the day. Hope would get the participants through this night, and the many more nights to come.

We won’t have a chapter next week because of Golden Week. I am not sure if I would be writing anything next week, but let’s see.