I paused right after writing this opening line, because a little voice in my head told me that the line was not exactly accurate. Yes, the first half of the OVA is without question Maria-centric – and Hayate-Maria shipping enough, if you must. The second half of the OVA, though, has Nagi sharing the spotlight with Ayumu, and in a way the story has more impact on Nagi than Ayumu. It might take some spinning to explain why this remains a Ayumu-centric story.

Let’s get on with the discussion with Maria first.

This did not happen for no reason.

Although this is only the second Hayate no Gotoku! OVA in 2014, I think I am seeing a pattern as to how certain stories are told. In a sense, Ch. 154 is the epilogue to the Mount Takao arc, and inevitably it would be awkward if we simply animate the chapter without taking any care of the Mount Takao arc before it. This is quite similar to Ch. 267 that was animated in Vol. A: Hinagiku’s donkey ears were the consequence of the Athena saga, and no matter how reluctant anyone is to animate Athena, proper explanation of Hinagiku getting donkey ears would be missing if there is not even the slightest touch on her saga. 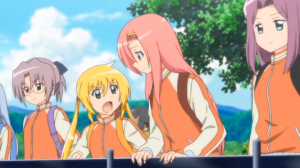 What the OVAs have attempted in Vol. A and arguably perfected in Vol. B is this: there would be a very brief overview of the saga, touching on the elements that are relevant to the main chapter they want to animate, and then move on. In Vol. A we saw Hinagiku fighting King Midas as Silver Red, but the explanation was hardly adequate – the narrator was self-aware enough to point it out. In Vol. B, the starting point of Ch. 154 was that Nagi suffered from muscle ache following the Mount Takao arc, so the hiking was briefly animated, while the bear fight and the King’s Jewel bits were cut, mostly and completely respectively (I sense folks screaming “PLOT!!!!” behind me, but fuck them). This allows sufficient context to begin animating Ch. 154, and I think most of us would be satisfied with the arrangement. 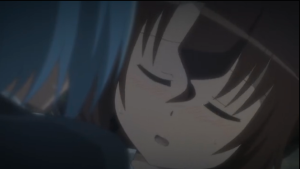 It is certain that some things can only be conveyed by voiced animation: the voice of the characters. We know from Ch. 154 that Maria has panted a lot, but the panting is brought to a whole new level with voice acting by Tanaka Rie-san. Any male object in front of the TV (yeah) or computer (a-hem!) would find it hard to keep their heartbeat in control. In this sense, we should not condemn Hayate for being a pervert – all men are perverts, after all. 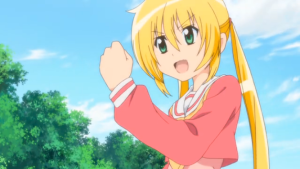 Some people would say any story with tons of Nagi is good.

Now, the second half. Is it about Ayumu or Nagi? As Ch. 359 is a chapter from the Mangaka saga, and ultimately it has a greater impact on Nagi than Ayumu. After all, Nagi found inspiration for her manga to be sold at Comiket, while – in the manga, at least – Ayumu was yet to find her career path. It is very valid to suggest that Ch. 359 is a Nagi story rather than an Ayumu story. So, how do we spin the perspective and make it an Ayumu story?

What we can see from this half of the OVA is the most indispensible value of Ayumu: that she is a constant source of support and companion, and she would give her friends her full support, even if it means that her problems have not been resolved or even discussed. 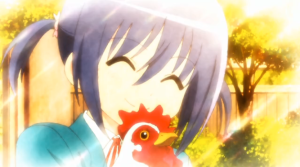 One of the best frames by Manglobe thus far.

Back in my Ch. 359 review, I didn’t truly grapse the Walt Disney quote (delivered by Tama in the OVA). Now I see this as a hint that Ayumu could become a great leader, who gets the best out of other – better – people. I think it captures the personality of Ayumu very well, and there is no better story of a person than the ones that capture his or her personality.

So far I have been pretty positive about the OVA, but my review won’t complete without some ranting. So, here we goes: what on earth is going on with the ED sequence? 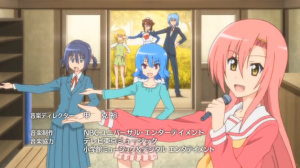 Of course, “Honjitsu, Mankai Watashi Iro!” is still one of the best songs in the Hayate no Gotoku! universe, but the sequence is criminally inferior to the Season 2 sequence. For one thing, art distortion is here and there, so the shape of Hinagiku’s face changes every second – and don’t pretend I haven’t seen you, Chiharu. For another, I am not sure if there was anyone to advise on the poses and dancing sequence, but everyone in the video successfully make themselves look like a bunch of fools.

I was actually torn between laughing out loud and shaking my head in disbelief. Yesterday I used the word “embarrassed” to describe my feeling, but upon seeing the video for the third time after some hours of sleep, I think I have finally found the precise word to describe how I feel: awkward. Everything in this video is simply unnatural to me.

This really goes beyond a tight budget and poor artwork, because even the best of artwork cannot cover up for the awkward movements of the characters. I wonder why they couldn’t do something similar to the lovely ED sequence in Vol. A – do they really think Hinagiku and the others are more appealing in their full – but distorted – forms?

This has nothing to do with any of the characters themselves, because even Al Pacino could appear in a video so bad that he had to say “burn this” after reviewing (Jack & Gill, anyone?). I don’t think we are going to love the girls less; we are just going to hate Manglobe more, that’s all.

Maybe… just maybe, I would find the sequence more acceptable if the song they chose was “Girls Power CARNIVAL!!!”.

Speaking of songs, here’s my little prediction for Vol. C:

This, and “Invitation ~ Kun toiru basho de ~ (ver. Hayate, Nagi and Maria)” are my bets.

And there is one more thing… Wakamoto goes missing again, while Tama has been given quite a few lines. Maybe it is time for Tama to take up the role of the narrator?