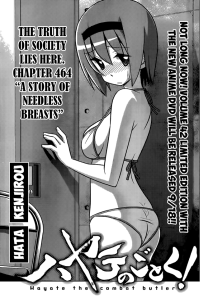 “No breasts are needless,” say perverts.

Somehow I think Konoha is not doing a very good job “hiding” the button for the secret bridge, because – admit it – everybody simply assumes that she is hiding the button in her chest – or, more precisely, between her big breasts.

There certainly is enough ground for Konoha to sue Hayate for sexual assault, so one of the very first thing that comes to Hayate’s mind is how he could get away with it. Somehow he thinks that it is possible to get away if it were Athena, because she has been wearing “revealing clothes” all the time, and his “sudden urge” to assault her breasts cannot be stopped. In short, this is a very stupid “blaming the victim” defense, be it legally legitimate or not.

Time flies as Hayate hesitates, but as he checks how much time is left – and generously explaining in details to Konoha what he is doing – Konoha destroys his watch with a stun gun. Apparently she has been told to do so, and most likely this is a tactic to make Hayate desperate and to make a stupid move. 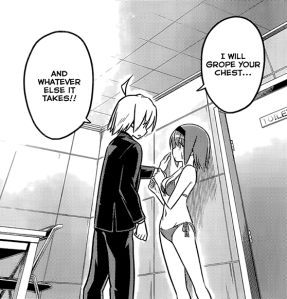 Is there something called “sexual confession”?

And desperate has Hayate become. What he does next, surprisingly, is not to grope Konoha’s breasts, but to threaten her that he would do so “if necessary”. I will take this as his last attempt to get the button without assaulting Konoha, but she makes a very clever move: to counter-threaten him. He can feel free to do whatever he wants with her breasts, if he could get over the guilt of ending her pay for – most imminent- the all-time classic multipurpose pencil box for her brother’s birthday.

In other words, we are back to our discussion in the last chapter: this is about Hayate’s conscience.

There seems to be no doubt that Hayate’s conscience is being sufficiently tested: he feels the pain in his heart, after all. Oddly, the intended subject seems to have changed in Hayate’s head. While he is supposed to think about Konoha’s family, apparently Hayate is only thinking whether it is okay to grope the girl’s breasts. Funny enough, Athena and Hinagiku come to his mind.

Sometimes it is better to be forgotten.

Given that he slept with Athena for quite a while at the age of six, it is marginally agreeable that she would be okay with his groping. The problem is: why does he mention Hinagiku? He knows full well that she doesn’t have breasts for him to grope, so why is he even thinking about her? My guess is that his conscience allows him to grope Hinagiku’s breasts – if any – in the first place. Coupling this incident with Episode 11 of Cuties, it seems that Hayate’s trust of Hinagiku is worryingly unhealthy.

Hayate then has an eureka moment of Love Master. In quite a few ways his moment is very similar to Hinagiku’s in the forest on Higan Island: 1) Aika is in the same kimono, asking Hayate/Hinagiku to calm down; 2) Hayate and Hinagiku react to the appearance of Aika in exactly the same way; and 3) Hayate and Hinagiku both make a statement of disbelief as Aika lectures them. I have my parallel people theory ready, but I think I won’t have to say another word on it, will I?

It doesn’t stop me making a picture, though.

It seems that Aika thinks that people with the same breast size think the same, so she asks Hayate to remember how he should deal with people with “needlessly big breasts”. Given the number of perverts out there who think breasts are the best, said breast size is never “needless”, although I seem to remember a research claiming that women with big breasts are more likely to have… breast cancer.

With the two girls presumably okay with his breast (if any) groping out of his mind, it is time for Hayate to consider which of the other girls presumably not okay with his actions to have “needlessly big breasts”. Whatever points he makes about the girls’ breast size, it is clear that Hayate doesn’t consider Konoha a beauty like Maria, while mysteriously he has not considered Sakuya. 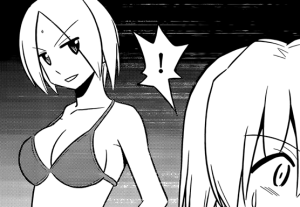 I won’t be very wrong to suggest that Hayate is obsessed with Yukiji.

In the end, Hayate settles that the person he knows with “needlessly big breasts” is Yukiji. While we should have seen this coming, this is probably too obvious an option that it is a little disappointing. For the second time in as many arcs, Yukiji plays the role of the butt monkey, and she does not really deserve such treatment.

Anyway, now that Hayate has decided that Yukiji is the one who has “needlessly big breasts” just like Konoha, he has to recall how to deal with her. In the previous arc Nagi showed a brilliant way to handle Yukiji: bribe her with money. Now, presuming that Konoha would be thinking the same, Hayate attempts to buy the button from her. 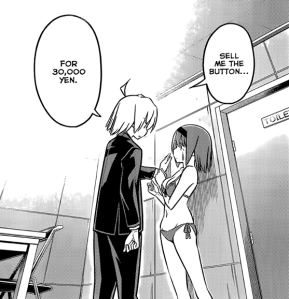 As it turns out, this trick just works (on principles), but obviously it has nothing to do with Konoha’s breast size. She works this “job” not because she agrees with Mikado’s ideals or visions, but because she is in desperate need of money. You might say she is more a mercenary than an employee, and it is always possible to change the mind of a mercenary: you just have to offer him or her more money.

So, Hayate successfully “buys” the button from Konoha, and in the process he also saves his conscience. In fact, the moment he chose to bribe Konoha over groping her breasts, his conscience has already won the battle. The worries I have expressed throughout these two chapters do not come true, and I should give credits to Hayate for doing the right thing as I see.

At a purely technical level, there is still some room for Hayate to improve. Nagi’s attempt to bribe Yukiji was extremely effective, because in the end all she had to offer was 1,500 yen. It was still a very small sum despite her “poverty”, and as she got what she wanted with such a small sum, it was a business extremely well done. Whereas, Hayate didn’t only start with 30,000 yen, he ended up having to “pay” Konoha over 120,000 yen for the button. Of course we can say that Konoha is great at negotiations, but Hayate is just equally bad at negotiations. So, as I look at the last panel of this chapter, my only comment is: “Stupid.”

There is another small problem: where would Hayate get that 120,000 yen to pay Konoha? Of course, if Hayate successfully restores Nagi’s wealth, they could easily pay Konoha any sum of money she wants. Yet, there is no guarantee at this moment that he would succeed, so Hayate is in fact taking a huge risk by spending future money.

It seems that he is not that intelligent after all.