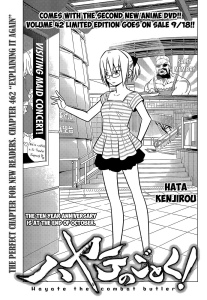 That’s Ruka on the poster, isn’t it?

Maybe it really is time for us to learn that we would only embarrass ourselves if we keep whining about the lack of progress to the plot(TM) whenever a filler chapter is published. I think I have said several times that it is not wise to push the plot(TM) forward at the cost of the fun and comedy, so I won’t go into details. Yet there is a simpler reason to stop writing complaint posts all the times: Hata and the main characters have not really forgotten about the plot(TM), and they would push it forward when they are at the right time and/or in the right mood.

I have read someone suggesting that Hayate no Gotoku! is a manga better read in retrospect. For example, you might appreciate the Mangaka saga more if you read it from the beginning to the end now that it is concluded, rather than one chapter a week when it is ongoing. You might understand that chapters that are not related to the plot (a.k.a. “filler”) can help giving readers a break in the middle of a very long saga, and giving screentime to characters who were not involved (yet) in the plot.

Just consider how else would Hinagiku get on Team Ruka if there were no Ch. 315 – a filler chapter to many people.

Now they are talking real business.

The same holds true, I think, for the current plot(TM). While some would say it was meaningless for Hayate and co. to watch Godzilla, this chapter is all about doing serious business with the plot(TM). This might be Hata’s way of slapping the plot(TM) in their face and saying “Just shut up and keep reading!”

So, our cast is doing exactly what Nagi has planned in the last chapter: to see Godzilla, to have shaved ice, and then to talk about the King’s Jewels. To my delighted surprise, what they plan to do next is not merely “following Mikado’s plan”, but they are actually trying to mess with it… a bit. 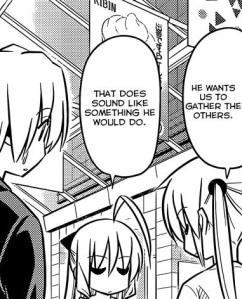 Don’t look so confident when you are guessing.

Or I should have said “Mikado’s plan as guessed by them”, because such plans have not yet been revealed at this moment. Athena may have the deepest insight into his mind (and she worked with him for some time), but there are things only her grown-up self would know, so small Athena can only guess on the missing parts. Nagi is Mikado’s granddaughter, and presumably she knows him the best, yet without much involvement in Mikado’s deeds, she could only guess what Mikado’s plans are based on his personality, but not proof. A more technical term for this is “educated guess”.

According to such “educated guess”, Mikado would like to collect the remaining King’s Jewels – the official count is now five – and instead of doing it himself, he has been telling Hayate to gather the stones for him. This sounds weird as Mikado has been giving away stones – two to Hayate, one to Aika, etc. – but it doesn’t matter to Hayate and co. now. What matters to them is their conclusion that Mikado is already in possession of one of the King’s Jewel, and they could mess up with it.

Everything is about technicality.

Let’s forget about Nagi and Athena’s choice of words and to rephrase their plan with the simplest form of English: Hayate would take the King’s Jewel from Mikado’s castle, hence making it a “lost” stone. A moment later either him or Nagi would return the stone to Mikado. This, according to Nagi and Athena, is “finding a lost stone for Mikado”.

Legally speaking, this really doesn’t account to stealing, because the girls are not showing the intention to permanently depriving the right of Mikado to the stone. If there is anything in the girls’ plan that makes you think it is illegal, it could be that Hayate is trespassing, but that’s another issue.

Technically speaking, you cannot call foul on the girls’ plan. What Mikado has said was for Hayate to find another King’s Jewel, so in theory any of the King’s Jewels would do, be it previously owned by Ikusa, Athena and – yes – Mikado himself. Of course, it sound weird that someone as clever as Mikado to overlook such a huge loophole in his rules, but to an extent it is understandable.

There is one idiot who doesn’t have a clue.

For one thing, it hasn’t been this obvious to me before Nagi pointed it out, so this could well be an egg of Columbus; in other words, this loophole is not as “huge” as it appears to be, because until today it has not been called out. For another, we are still merely guessing that Mikado has a King’s Jewel, while it is entirely possible that he has not; there is no such loophole in Mikado’s plan if he does not have a King’s Jewel.

Yet in many ways, exploiting the loophole is what I would enjoy to watch. I am not a big fan of Mikado, so I don’t want his will be done on earth. The girls’ plan is a huge prank on Mikado, because they are fooling him that he is one step closer to his goal, while in fact he would make no progress at all. If someone thinks himself so smart that he could order everyone to do his deeds, then the best revenge is to make his orders backfire on him.

Or, at the very least, I would like to see him being completely fooled once. This old man is so full of himself that I would like him be taught a lesson, and it is more than appropriate that the lesson comes from the two girls arguably the closest to him. “What about Maria?” you might ask. Well, she is already toying Mikado, so I won’t say she would be giving him new punishment…

Anyway, the first step of Nagi and Athena’s plan would require Hayate to infiltrate into Mikado’s highly secured treasure room. By “highly secured” we are not talking about the (somewhat) laughable traps set by Higanman on the island, but traps that could kill Hayate.

To keep Hayate alive, Nagi offers to hack into the defense system to stop the electronic locks, cameras and traps from working. Hayate has one hour to get the King’s Jewel (if it is there) from the treasure vault seven floors below and escape. As someone has already pointed out, this is basically Mission: Impossible.

Just like the movies, things do not go very well for our protagonists. Communications between Hayate and Nagi is soon cut as the butler goes underground – tech giants please solve this annoying problem already! – and somehow a trap is activated despite Nagi’s effort – or, because of the lack of it?

Maria is kind enough to act as the narrator, reminding what kind of manga is Hayate no Gotoku! as Hayate starts his mission. “Love and bloodshed fill this butler comedy”, so shippers rejoice, while I don’t see how that’s a comedy when blood is shed – that is supposed to be a breathtaking climax, isn’t it?