I would like to see a St. Tail cosplay here.

Honestly, we should have seen this chapter coming.

Since Nagi made her announcement that they were going to the beach “next time” in Ch. 432, we should have been expecting a filler chapter. It didn’t come in Ch. 433, and it surprised a lot of people. Now the filler chapter finally comes in Ch. 434, I am quite curious as to how readers react to this.

Yet, from a more macro perspective, it makes more sense that Ch. 434 is the filler chapter rather than Ch. 433. We are having Merry Christmas and Happy New Year, and as you can see from the recent schedule, we did not have a chapter last week and we won’t have a chapter next week. This week’s chapter, therefore, is consequently isolated. Even if we enter the “Hisui arc” (or whatever) in this chapter, we won’t come back to any points raised for two weeks, so it is hard to build up the momentum. As such, it is justifiable to simply not build up any momentum at all, but bring an end to this year with a filler chapter which everybody would be forgetting in two weeks.

Randomly picking up a Royal Flush.

As Hata suggests, this chapter is also a great opportunity for him to blatantly market on the “see-through” playing cards that come with the limited edition of Vol. 39. As I got my deck of cards, my first comment was that they were “totally unplayable”. Hata, on the other hand, suggested on Twitter that to play these cards well, the key is “mind games”.

The point is that half of the cards are printed on transparent plastic, while the other half of the cards remain opaque. Playing poker with these cards means that you know what transparent cards your opponent is holding, while you guess on the opaque cards. According to Miki in this chapter (and yes, apparently Hanabishi Miki is credited as the creator of these playing cards), the transparent cards “add more strategy”: you are no longer guessing your opponent’s cards blind; you are guessing them half blind. 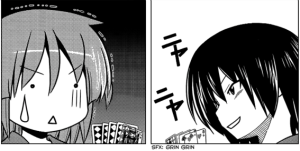 This takes “toying Izumi” to a whole new level.

The fact that there is something for you to guess is what makes the see-through playing cards “revolutionary”. Knowledge on “some” of the cards may not make you more sure about the game, but it could actually make you more unsure. Take the game between Risa and Izumi as an example. Has Izumi not been that sure that Risa had a straight, she might take the risk to call (she had two pairs, so not bad) and win the game. The four visible cards – which looked like a straight – and Risa’s evil smile successfully scared Izumi into folding.

So, this filler chapter is blatantly marketing on the playing cards by means of demonstrating how the cards should be played. After all, if everybody thinks like Doughnut Gunso, then nobody would see a point in the cards and might not buy them. Then again, Doughnut Gunso never cared about playing those cards in the first place…

Not “rubbish” or “nonsense”, but “pretty interesting”.

Perhaps surprisingly, even Hinagiku sees the point of the see-through playing cards, and she compliments them. The next thing we know, card games in the Student Council Room is accepted (I thought the combination of the words “card” and “game” would not sound good for Hinagiku), and the President suggests to have a few games herself. Maybe it’s because she is a little more relaxed than usual during summer vacation?

Miki sees this as an opportunity for some personal gain. For some reason she seems quite interested in Hinagiku’s naked body, so she suggests that whoever loses the game would strip. The possibility of losing to Hinagiku has never crossed Miki’s mind, because she is confident that she as the creator of the playing cards would know more about it. Try telling that to the English who invented football (soccer)…

What does “Tsundere” have to do with anything?

Common sense suggests that this “Yakyucards” – it is basically Yakyuken with cards, isn’t it? – is as bad as, if not worse than, betting money. Of course, betting money on card games equals gambling, which is forbidden in high schools, but shouldn’t Hinagiku ban Yakyucards because of the indecency? Anyway, Miki (as Hinagiku’s childhood friend) knows best on how to make Hinagiku to do anything – by daring her to. Sure enough, Hinagiku has no resistance to Miki’s wave of personal attacks, and agrees to play Yakyucards with the knowledge that someone would be stripping – no, it’s not Miki, but Izumi.

Next time, the characters should dare Hinagiku to confess to Hayate, and… boom!

I have little idea on poker so I am not analysing the three rounds between Hinagiku and Miki. Yet the performance of Hinagiku does remind me of another girl voiced by Ito Shizuka: Takei Hisa of Saki. Both look relaxed and confident on the table, and they have the very same weapon: mind games. Either out of necessity or personal interest (or both), they both enjoy playing with their opponents’ mind: Hisa made an “empty riichi” to stop Hajime from a ron, while Hinagiku scares the Hell out of Miki by… trash talking. Of course, their mind games serve them well and bring home to them victories.

That’s not even a “poker face”…

In fact, Miki is so intimidated by Hinagiku’s mind games (she suddenly looks much more cunning than Risa…) and observation, that she suggests a change in the bet: they originally agreed that whoever loses 3 rounds would strip naked, but now Hinagiku would have to strip naked if she suffers her first defeat in the third round. Hinagiku is so confident of her total domination that she agrees without even thinking…

Of course, luck is essential in games like mahjong and poker – Hayate would walk out of a casino with all his money lost even if he is the world’s most skilled gambler. Hinagiku certainly has better luck: in fact, her luck is not bad when it is not about Hayate or heights. In random games like poker or lottery, Hinagiku does rather well. Sure enough, her good luck comes when Miki has a Full House – she has a Royal Straight Flush. Miki does have a point: if you have hands that good, there is no room for mind games. 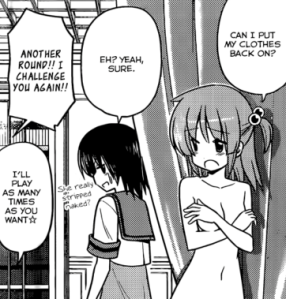 Don’t expect me to let you slip away even in a Hina chapter, Izumi…

So, Izumi is stripped naked, and fans are jubilant – although, the thing is that she should have complained about this stripping nonsense and demanded Miki to do it herself, instead of obediently paying the price for her friend. Miki then suggests to challenge Hinagiku again, without stating who would be stripping on their side this time. Clearly, if Miki wants to see Hinagiku stripped so badly, she would then bet on Risa and herself, until Hinagiku is finally stripped, or the SC Rangers themselves are all stripped. Which one would come first? It’s your bet.

Should we make a Yakyubet out of this?