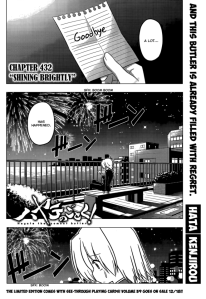 While how deep is Hayate’s love for Ruka remains arguable, it is never easy to take when a possible love relationship with a girl who could at least make you blush (and that obviously is an understatement). So, while the other girls are happily watching the fireworks, Hayate sits alone looking lonely and sad.

By the way, Maria and Athena are seen watching the fireworks with the other girls. At least they are not left alone at home with two cats and a ghost. It is just that I don’t understand why they have come…

This for the guy who is considered to own a harem.

It has been a running gag that while couples enjoy festivals (from Valentine’s Day to Christmas) together, single young males would automatically become members of the “Sine Sine Dan” (死ね死ね団, roughly translated into “To Hell To Hell Group”). Naturally, Hayate is also granted automatic membership, and he immediately acts like a long-term member: sulking at every passing couple, and actually cursing them.

There is nothing really special about Hayate’s thoughts and reactions. He happens to be a boy who has just lost an opportunity to date a girl, and I think he is merely jealous that other couples are having a good time while he is all alone. In other words, his frustration doesn’t mean anything other than that he does not have a date. Instead of thinking about any girl he could have dated, he is just thinking about the date itself.

Having a girlfriend and having a date are two different things.

Phones are useless if nobody pays attention to them.

The bad mood brings him all the way back to the Violet Mansion. There he finds that he has missed two text messages from Ayumu telling him their whereabouts. Now he realises that not only he has lost the chance to date a girl, he has also missed the chance to at least enjoy the fireworks with his friends. What hurts him more, I suppose, is that he is actually invited. Now he has nobody but himself to blame for all his loneliness.

Reflecting on his lost love with Ruka, Hayate concludes that he has “messed up”. At basic level, this was a girl who has expressed her love for him, has kissed him and has declared that she would run away with him. What’s in his hand now, though, is her goodbye note. As he did not accept her love, it would be easy for him to conclude that it was his fault for not having a good ending with such a good girl, and thus the comment “I messed up”.

Then there comes a masked heroine referring to herself as “Life Ender-chan” – please don’t tell me that it has anything to do with “Life Savers” – whose mission is to cheer Hayate up. Needless to say, the true identity of this masked heroine is Nagi. 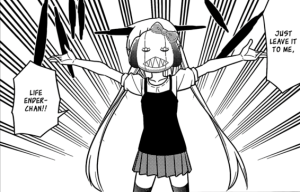 All the way back for a show.

As always, there is something which bugs me. This time, it is (again) the fact that Nagi could go home on her own. Of course, we are told that she has acquired the skills of taking a taxi, but it is a very expensive skill. What’s more, if we assume that she is on her own, then we must ask: given Nagi’s track record of being kidnapped, does none of her caring friends find this very dangerous?

Once we (meaning, if we could) get past that oddity, the rest does make some sense. Nagi would know that Hayate has returned to the Violet Mansion because the guy has a GPS on him. If Nagi could find Hayate in the mountains, then she could definitely find him at home. As Nagi probably knows what would be going on between Hayate and Ruka, she would also understand that Hayate needs company. As such, she returns to the Violet Mansion alone to cheer him up.

Stil, the idea of “Nagi taking an expensive ride on her own to settle matters with Hayate” is very odd for me. In order to give myself better sleep tonight, I am going to suggest something which I think makes most sense: as Hayate walked his way back home, it would take a long time – long enough for the fireworks to end, and for everyone to return home on a public transport. It could be that Nagi has been with everyone all along, but as everyone is home, they simply decide to let Hayate and Nagi have a moment – or, Hayate is so late that everyone but Nagi has simply gone to bed.

I know, there is something not right about this suggestion as well, but still… just an idea. 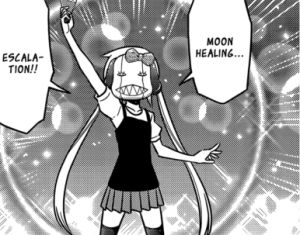 This is so wrong in every way…

Nagi’s first attempt of cheering Hayate up is not very successful – she actually pulls out something that is almost as old as herself (fact check: “Moon Healing Escalation” comes from the first season of Sailor Moon, which was aired in 1992; Nagi was born in 1991). Should it be a more matured girl, I am pretty sure she could cheer him up in a better way.

Her second attempt is much more impressive. She presents Hayate with a signing board – her very first signed portrait. If we take her words seriously, it would also be her only signing board (I am not sure her future editors would allow it though… just saying). It might be a worthless doodle now, but if Nagi becomes the trillion-selling mangaka she aims to be, then this signing board will be very, very valuable.

Of course, let’s not for one moment think that Hayate would ever sell it. To him, it is already invaluable now.

This cheers Hayate up, although I think that Nagi has only led Hayate to dodge his concerns. Hayate concludes from Nagi’s cheering that “there are many different kinds of happiness”, while “no happiness is better or worse than another”. The thing is that he has not addressed the unhappiness of not having a girlfriend, but has only covered it with the happiness that he has a wonderful mistress. It’s just like replacing a rotten apple with a good orange – you surely have a good fruit, but it doesn’t change the fact that your apple is rotten. Unless you address your rotten apple, you will not have a good apple to eat when you want it.

Hayate is now fine with the orange in his hand. If he can keep his love for his orange for the rest of his life, he would enter the so-called “Klaus route”: to dedicate himself to his mistress without marrying her, while at the same time marrying nobody at all. Yet the problem of his rotten apple is definitely coming back, given that… well, at the very least, Athena (full version) is set to return soon. If he really wants to eat an apple, and a good apple is around the corner, what is it to stop him from saying that “I still prefer the happiness of a love life after all”?

Clearly, Nagi is not ready to tackle this problem for him. All she could do is to get his attention on the orange, while leaving the rotten apple untouched and unattended. I take this as evidence that Nagi is still not matured enough to be Hayate’s soul mate (Nagi really should take a page from Hinagiku here), but at least she is trying. If this is the best she could do, so be it.

Then again, the animations, namely HIAPOE, CTMEOY and Cuties have all been telling us that Nagi herself would become the good apple sooner rather than later, so let’s see how it turns out. The way I see, it can turn out both ways: at the end of Cuties he has only kissed Nagi on her forehead without even blushing, but the swans decorations (which look like nothing other than hearts…) are very hard to spin away from.

And there’s your Tsundere.

In any case, this is really, truly the end of the Mangaka saga, and presumably the “biggest trial” in Nagi’s life has also come to an end. Love it or hate it, it is done. Once I have finished my homework (I still have 5,000 bloody words to write!), I guess I would write something to review Comiket and the entire Mangaka saga. Next week, we are going to have a new story, and if Nagi’s words are something to believe, then we are going to have a beach chapter next week!

… wait, aren’t we supposed to talk about the missing Ikusa?