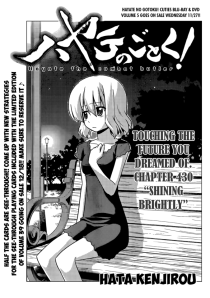 In my place, flirting scenes are called “flashes” which indeed shines brightly.

Whatever we say, the last panel of the last chapter did promise us a great revelation on Ikusa’s whereabouts, his relationship (?) with Dr. Kurosu, and the return of Athena (full version). Yet the skeptical Doughnut Gunso has put his money on a scenario suggested by AstroNerdBoy, that the first thing we would see in this chapter is the SC Rangers making their film. As it turns out, the scenario has not come true literally, but somehow it is close enough – enough for me to go and ask the bookies for my money. Who’s the bookies by the way?

The point is that the “great revelation” is not shown to us. It is not that the revelation will come a moment later, as there is no “a moment later”. In fact, while everyone is busy watching fireworks or holding hands, Dr. Kurosu and Ikusa have been completely forgotten. We may even say that it doesn’t even matter if Dr. Kurosu has said nothing about Ikusa at all. 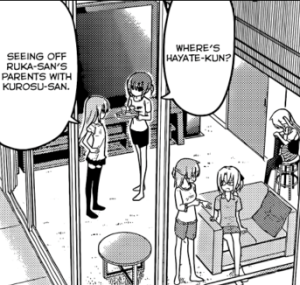 Once again only one person remembers them.

Yes, we all know that the “great revelation” would return later – maybe next chapter. Yet as this “great revelation” has become yet another item on Hata’s “to do” list, I am bound to ask: if you are going to address an issue later, why don’t you simply raise that issue later? Nobody has been talking about Ikusa before you mentioned Ikusa, Hata!

Sometimes I feel like Hata has been giving permissions for us to look down on his manga, and to blame everything to “this is the kind of manga you are reading”. Of course he has every right to do that, but in that case… well, let’s just say that readers shouldn’t feel offended if people say we are reading a bad manga – or a bad saga anyway.

Anyway, Nagi and her happy friends are looking for a good spot to watch the fireworks. Apartment towers are of course a wise choice – when I was small, my parents would bring us to their office tower, from where we had the best view of fireworks over the harbour. Yet not everyone has the permission to enter particular apartment (or office) towers unless you are the owner, and the good eye (on Ayumu) to spot these towers does not make you the owner. 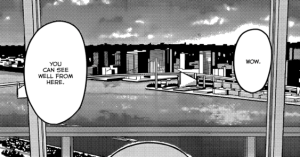 This has to be a goof…

But then they do have an owner. For some reason, Izumi and two others (per Cuties episode 6) meet Nagi and her happy friends (per Hata), and it is revealed that the apartment tower Ayumu eyed actually belonged to Izumi’s family. The one thing that pisses the poor Doughnut Gunso off is that the Segawas actually own a building which they do not live in. Damn S*ny…

Of all the people in the world, there is a certain Hinagiku with a fear of heights who would have to look out of the window to see the fireworks. Am I the only one who thinks it could be a problem?

Ayumu plans to call Ruka and tell her that they have found a great spot to watch the fireworks, but Nagi stops from doing “anything insensitive”. While she then explains that Ruka’s time with her parents should not be interrupted, a part of me believes that Nagi already knows Ruka is now alone with Hayate. Maybe there is a mutual agreement between the two that their love triangle would be “sorted out”? 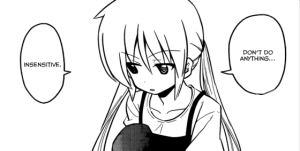 What is quite hard to miss is that Nagi has once again entered the so-called “wise man mode” (per online forums), just like she did midway through the Athena saga. In that case Hayate was struggling between Nagi and Athena. Then Nagi made a move at the perfect timing, Hayate decided to stay with Nagi, and everyone began shouting “Nagi’s complete victory!”. The line “Milady is my life in itself (sparkling!)” has even become a meme. Given that this is Hata, there is a high probability that history would repeat itself, but with Athena replaced by Ruka.

Well, at least this time we won’t be seeing Hinagiku’s tears.

I am not sure how Ruka manages to shake off her parents and Dr. Kurosu and be alone with Hayate – maybe giving their daughter private time with a boy she loves is their way to compensate her? Anyway, while other girls are stuck in the apartment with Nagi – you might even think that Nagi is deliberately stopping any other girl from dating Hayate this night – Hayate and Ruka have their private time for a date.

Do your own math.

Before anything, Ruka hands in her financial report: she has earned exactly 20,000 yen from selling her manga. If we assume that Ruka priced her manga at 200 yen per copy (same as Nagi), then Ruka would have sold 100 copies, which means that… she has actually tied with Nagi?

Now, it is not clear if Ruka’s parents have finally bought the copy they asked for, but as they were told by Ruka not to buy it, they might just not buy it. It means that Ruka would still have one copy left. As Ruka doesn’t bother to explain how she managed to sell 100 copies with one copy left, it is everybody’s guess. While there is no point describing the date between Hayate and Ruka in details, I might just devote my word counts to my own guessing.

The most straightforward explanation is, of course, that Ruka has deliberately produced 101 copies of her manga, while holding one back from selling. She would then know if the level of her manga is the same as Nagi’s (i.e. we can both sell 100 copies) while handling the victory to her rival (i.e. fooling Nagi that she has not sold out her 100 copies). In other words, Ruka has not lost, but she has lost. 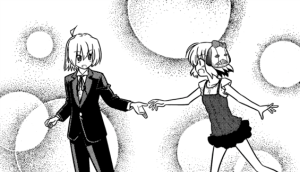 “Everything her heart desires!”

I would confess: even though I suggested that Ruka might have deliberately handed the victory to Nagi in order to bow out from the manga business (for 10 years), I am not convinced. The truth is, Ruka still has Hayate to fight for in this battle, and there is no reason for her to give up just yet. She could still come out victorious, claim Hayate, and then announce her temporary retirement from the manga business. In other words, she can get everything she wants with a victory, so why should she think of losing?

As I am not a scholar, but a stupid Doughnut Gunso, I honestly find it even more and more difficult to understand Ruka’s thoughts with each passing chapter. To begin with, I don’t know if Ruka actually wanted to win or not. If she wanted to win, why did she produce one extra copy and deliberately lose to Nagi? If she wanted to lose, why did she imply to Hayate that she has sold 100 copies, and thus she had in fact not lost?

As I hit a dead-end wild guessing on Ruka’s motives, I suddenly have a weird thought: maybe Ruka did not have that extra copy deliberately, but accidentally. Remember that Ruka was making 100 copies of her manga, and she could make at least two mistakes in the process: she could either have printed 100 copies while she should have printed 99, or that she has bundled her original work with her 100 printed copies for sale. 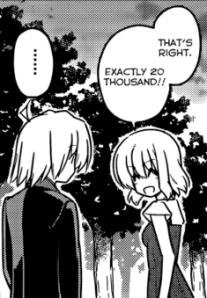 I actually see the word “irony” written across her face.

It would mean that she has actually sold 100 copies, thus making 20,000 yen. Yet she wouldn’t have time to count her income to verify how many copies she has sold, and could only look at her desk to see how many copies were left – there was one. As she thought that she had 100 copies to sell, she would assume that she has only sold 99, and thus she has lost. When she finally had the time to count her money, I would assume that she was like “Heck! I have sold 100 copies as well! I have not lost!” Yet it would be too late for anything any more, and she could only laugh off her careless mistake…

The moral from this story: at every step of your work, do your double-checking.

Yes, I have absolutely no evidence to back up my theory, but as we are only making guesses anyway, why not have a perspective that “Ruka did not lose deliberately”, just for reference? Why do we have to assume that Ruka lost on purpose for anyone’s sake anyway?

What we can see beyond the argument on money is that Ruka is having a good time with Hayate. Two people with money problem suddenly find that they have a huge fortune to spend, and the money flies in no time. Yet the enjoyment of a date doesn’t depend entirely on how much money they have spent, but how much they have enjoyed each other’s company. With Hayate making the move to take Ruka’s hand first, and Ruka making the move to take Hayate’s hand later, I think it is clear that they both enjoyed their date, possibly in a romantic way. 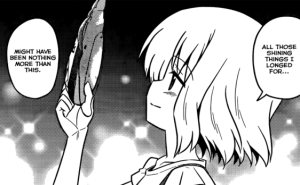 At the end of the chapter – and possibly the date as well – Ruka makes another debatable statement: “All those shining things I longed for might have been nothing more than [the mask].” More specifically, it is unclear what exactly is Ruka referring to as “those shining things”. Some might say that it is her mangaka dream, some her idol dream, and some her Hayate dream. So…

I would take this line in the context of this chapter (for now): a few pages ago Hayate used the words “these shining things”, and if I am not mistaken, he was referring to “mask, goldfish, scooping and cotton candy… these stands are filled with glittering dreams of children”. Assuming that Ruka is not using “those shining things” on masks and goldfish, I would say that she is actually referring to “glittering dreams of children”. What was Ruka’s dream as a child? To become a mangaka. As such, I would assume that Ruka is officially (?) declaring that she would be giving up on manga.

Of course, I see merits in the claim that Ruka is referring to her feelings for Hayate. After all, she has taken Hayate’s hand right after finishing her line, and it makes sense to think that she would be addressing her “love issues” with Hayate. The only question is, why would a girl take a boy’s hand and then tell him that she is dumping him? 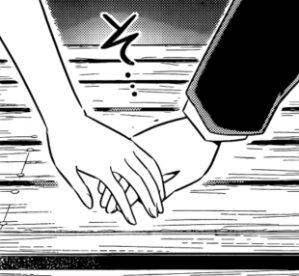 So we might expect a development similar to that of the Athena saga. Well, at least this time we won’t be seeing Hinagiku’s tears. Have I said anything about Hinagiku’s tears already?