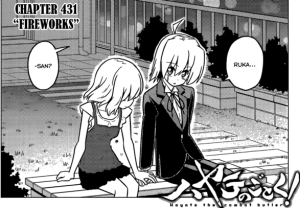 Let the good ship sail, shall we?

As someone who has been worried that history would simply repeat itself, I must say I am relieved that it’s not that simple. Well, it’s not complicated either – what I mean is that Hata isn’t being lazy here by recycling the story. This is something different from “Leaf Bud Breeze”, should we say. To begin with, I never ever expected Ruka to ask for ice-cream as she reached for Hayate’s hand. I know, this makes more sense than dumping him, but still…

So, ice-cream. It has to be Haagen-Dazs (everyone in this manga eats Haagen-Dazs), and half a wish of Ruka has been granted – the other half is to be in Rome. The said wish is on Ruka’s “bucket list”, a list of what she wants to do before she kicks the bucket. Now that she has accomplished one thing, it is time to move onto the only one remaining item on the list: “have a wonderful boyfriend”.

This guy is truly hopeless…

I’ll say this: if you do not want someone to read the words on a paper, do not show them the paper in the first place. Of course, it is extremely insensitive for Hayate to simply snatch the paper, but you should always be a bit more careful around a moron. Ruka then takes revenge with a lot of teasing and, yes, trolling. Ruka is a girl who knows exactly where Hayate’s weak spots are, and she apparently enjoys jabbing at them. The funny thing here is that Hayate is such a good target of Ruka’s pranks. He is falling for every one of them, he is giving the most amusing responses, and he is stupid (or perverted?) enough to believe that Ruka would actually show him her breasts. He is such a good toy that even the pacifist Doughnut Gunso wants to give a good kick at his ass just for the fun of it.

Now there is a question: what’s exactly the ass of a piece of ass?

But the fun does not last long, as Hayate and Ruka find something isn’t good between them. There is a line that they cannot cross; they cannot end up together – at least, this is (what I think) Hayate is thinking now. It seems that Ruka knows what Hayate is thinking, and thus she tries to make just one more attempt to grab Hayate: she suggests to throw everything away.

Once again Ruka shows just how much conflict she has been in. One chapter ago she was talking about returning to her idol business, and one chapter later she is talking about giving up everything – including her idol business, I assume. I take this as evidence that Ruka has never really given up on Hayate, and thus I still believe that she did not lose to Nagi on purpose because she wanted to return Hayate to Nagi. Yet in the end, for whatever reason, she has lost. The bet on Hayate must be honoured, and she must give up on Hayate. If she doesn’t want to give up on him, the only option for her is to run away from the bet, and also her social circle.

Come to think of it, if Ruka only needs to run away from her social circle, she may consider starting her idol business in another country. Given that she is going to have a concert in Las Vegas (we have already seen it in CTMEOY), maybe this would be her first step to move away from Nagi – there is no point staying with her anyway.

For now, though, Ruka is (possibly) not thinking about her career plan, but simply to run away with Hayate. It is very obvious that Hayate isn’t very enthusiastic about this idea. He has never had the intention to leave Nagi, and he has no reason to do so now that Nagi has won. Nobody knows what he would do should Ruka win, but given that this is Hayate, my guess is that he will simply cry and wait for someone to save his ass.

The guy is not listening.

In fact, to say that Hayate “isn’t very enthusiastic” would be an understatement. He is actually trying to convince Ruka that it is not a good idea. A huge part of the reason is of course the presence of Nagi, but I think there is also a small part that Hayate is not confident in himself – he is in fact comparing himself to a piece of junk. Given his track record of bad luck and insensitivity, I am inclined to say that he is not wrong, but it is actually shocking that his self-confidence could be so low.

The beginning of the firework is the final nail as Ruka’s suggestion is interrupted. Some compare this scene to Hinagiku’s first confession, in that both their messages do not reach Hayate. I disagree; Hayate did not get Hinagiku’s message but he was trying to listen, while Hayate knows exactly what Ruka is going to say but he is not even listening to her. If he has any intention to listen to Ruka, he could simply ask her to go on (which he did with Hinagiku), instead of making a comment on “the fireworks have started”.

I think Ruka knows exactly what is on Hayate’s mind – or, in fact, what is not. Upon knowing that Hayate is not going anywhere, she tells him to keep watching the fireworks, gives him a farewell note, and leaves him in silence. The Hayate-Ruka ship is hereby sunk.

Hayate-Ruka, a.k.a. the ship that sunk…

As Ruka has left, Hayate is shown to be rather sad. If anything, I think this chapter gives us one final piece of evidence that Hayate has real feelings for Ruka – just like he did (or maybe still does) with Athena. He suggests that he regrets not marrying Ruka, and I think nobody would regret not marrying someone they never loved.

Assuming that Hayate does love Ruka, then we would see that it is yet another opportunity for him to find his own happiness gone. For whatever reason, Hayate can do nothing about his feelings for Ruka, and he could only watch helplessly as this love has come and gone away. In Ch. 381, one chapter before he was kissed by Ruka, Hayate asked himself once again “will the day ever come again when I will truly be able to say I love someone”. We might have expected that he could do it with Ruka, but he is not able to say “I love you” to her. He is not doing any better than he did in Athens.

Now that the relationship (?) between Hayate and Ruka has ended, I have a feeling that the three parties in this “love triangle” might all have been losers. Hayate is not happy because he cannot confess to a girl he loves, Ruka is not happy because she cannot get the boy she loves, and Nagi… well, actually it is too early to say if she would be happy or not, so let’s see. It’s just… am I the only one who thinks that it is lousy PR work on Nagi’s part?

All in all, it is not some happy ending, but at least it is beautifully done. While the Hayate-Ruka ship sinks into the bottom of the Atlantic (or the Pacific, as they are in Japan), neither Hayate nor Ruka has pushed the self-destruct button. It is just that the two of them realised that things simply do not work out for them.