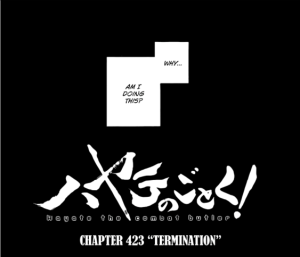 To become a better mangaka!

To say that Nagi only has one ally in Chiharu seems to be a bit unfair. At least they are not alone in the Violet Mansion, as Maria and Athena both stay with them. They might not be on “Nagi’s team”, but Maria supports Nagi in other ways like cooking for her. Athena (who mysteriously manages to stay up very late this night) makes company at the very least. There is a difference between working in a quiet house alone, and working in a house full of your friends.

It seems that both of them are fairly sure that Nagi would mess up with her manga. Maria has known Nagi for too long, that she could tell from past experience how things would end – as usual. Athena, with her intelligence, seems to be able to guess how Nagi would mess up – in fact, there are so many things that can go wrong, and it only takes one mistake for Nagi to fail miserably…

In any case, it seems that both of them are not the most optimistic supporters of Nagi.

In all fairness, Nagi is in a very bad situation. Not only that she is on a very tight schedule, she is also not working fast enough to meet that. She is sick, so she is not in the right conditions physically or mentally to draw anything of good quality. Her manuscript is indeed not of good quality – even she admits that it is “nothing but scribbles” (again). It seems that everything is going wrong for her.

The biggest problem for her, though, is that she is beginning to question the point of winning the contest. She has always been determined to defeat Ruka with a superior manga. She might lack confidence sometimes, but she was very certain that she would want to win. This time, however, she has the feeling of fighting a meaningless battle, and her heart hurts because of that.

Why does Nagi find the battle meaningless? It comes back to her two main reasons to win over Ruka: first, she would want to be “something special”, and one way to achieve this is to defeat someone whom she thinks is “closest to God”; second, the two girls have placed a bet on Hayate, so Nagi would have to win in order to keep Hayate to herself. So, what has happened to these two reasons?

For the first one, Nagi realises that she has not made any improvement since Ashibashi-sensei expressed his “disappointment”, so if she has lost in Comisun, she would lose in Comiket as well. For the second one, Nagi now thinks that Hayate has fallen in love with Ruka, so there is no point keeping him with her if she is no longer his first priority.

That said, I don’t see any problem with a “loyalty first, love second” approach.

The change to the first reason makes Nagi to realise that she is facing a rival too powerful for her. She has already lost to Ruka once, and she is not in a better position this time. She is almost certain that she would lose, and – let’s face it – a defeat tastes bad, so it is in fact foolish to invite a defeat – unless there is something worth fighting for no matter how slim the chance.

You decide who’s the culprit here.

That brings us to the change to the second reason. It is safe to say that Nagi has accepted that Ruka is a real threat to her “relationship” (cough) with Hayate, and she has been hoping to get rid of such a threat once and for all. Yet, Nagi realises that if Hayate has fallen in love with Ruka, her victory would mean that Hayate would be separated from his “true love”, and nobody would be happy: Hayate and Ruka would be unhappy because they cannot marry each other, and Nagi would be unhappy because she is keeping someone who doesn’t want to be with her any more. More importantly, Nagi would see herself being the culprit as she is making all of them unhappy, and she would be living her life in guilt.

As such, we may now understand why Nagi is uncertain about the manga contest any more. A defeat would hurt her pride (again) and make her unhappy, while a victory would make her a culprit and make her unhappy. There is certainly no point in entering Comiket, and her heart hurts as she forces herself to do something meaningless. Then again, defeating Ruka and keeping Hayate shouldn’t have been Nagi’s objectives in joining the doujinshi events. Don’t get me started on this again…

Perhaps the most alarming thing is that Nagi is beginning to doubt her bond with Hayate. We can see that Nagi firmly believes that Hayate would not root for her, and would not care about her even when she is suffering. It doesn’t matter if what she thinks is correct – we are almost assured that this won’t be the case – but the very fact that Nagi doubts Hayate’s loyalty to her is enough to make their “relationship” (cough) crumble. Each and every kind of relationship is built on trust, and is destroyed because of a lack of it.

In a sense, Nagi’s biggest rival is herself. Her lack of faith in Hayate makes her desperate, and she begins blaming Hayate for no good reason – nobody in their right mind should be calling Nagi at 2:02, but Nagi still blames Hayate. Every action and thought Hayate makes is now put under the microscope and scrutinised. Yes, Hayate is a little too determined to serve Ruka, but now the damage to their “relationship” (cough) comes from Nagi’s side. We might say that Nagi has turned into a bomb that would self-destruct when exploded.

Sadly, if Ruka stays far enough from the bomb, Nagi would only be hurting herself and Hayate with her explosion. 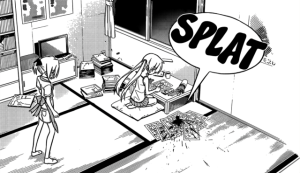 Choose your own swear word please.

And sure enough, Nagi explodes – though thankfully not at Hayate. She hits her table hard with both her fists. The ink bottle is sent flying, and the content splashes over almost all of Nagi’s finished pages. In other words, Nagi’s efforts has all been ruined. Cue all our deja vu of working hard on a project, but then face the BSOD before we even have a chance to click “save”…

Chiharu and Maria come to the rescue, but Nagi says that she might as well give up on the manuscript. It is still unclear whether Nagi is only giving up on this manuscript or the entire competition, but we might expect Maria to wisely comfort her in the next chapter, for this is the main duty of Maria as Nagi’s mother figure.

Given that Nagi rates her manuscript as “nothing but scribbles”, it could be a good thing for her to start over again. The only problem is that she is running out of time – unless, of course, Athena could bring up a miracle by turning back time or even slowing it down. I thought the Royal Garden could serve such a function?

In Apple style, we do have one more thing…

Most likely this is CTMEOY reference.