My focus is on the small words at the top…

After reading Ruka’s storyboard, Kayura decides that she has to tell a story. Given Kayura’s ability to make reference and tell story – and more importantly, the fact that she managed to fool around with the SC Rangers for hours in Cuties – we might have to worry that she would take us all the way from Tokyo to Hokkaido with her story. Luckily, Kayura managed to stay close to Nerima this time…

Let’s start with the conclusion: yes, the idol Kayura mentions in her story is Ruka. It turns out that Kayura has known Ruka the idol since kindergarten. As she keeps Ruka’s poster (with her autograph) in her room for so many years, we may even conclude that Kayura is a long-time fan of Ruka the idol. If so, we may understand why Kayura has been so critical on Ruka’s manga, while spending hours lecturing Hayate that he shouldn’t be kissing Ruka: Kayura is a fierce supporter of Ruka’s idol career. 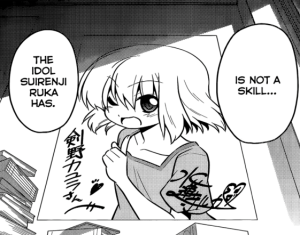 As such, Kayura would be the first one to jump out and say that Ruka’s manga dream is crap. Let’s not act as if we would really “respect” our idol’s own dream. If you idol (say, Justin Timberlake) suddenly announces that he would retire from the idol business and become a mangaka, most probably you would say: “Bullshit!”

So, yes, Ruka’s manga dream is “bullshit” for Kayura.

The very point of Kayura’s story – or, in a sense, Ruka’s story – is that Ruka is someone who cannot lie. If you remember (for this, you need to remember things very well…), Ruka is very weak with lies. Not only that she doesn’t like being lied to, she is very bad at lying as well. Even at kindergarten, Kayura saw through Ruka’s not-so-professional smile, and realized that she was a girl who wasn’t adept at lying – even if her job required her to keep a “business smile” all the time.

It is therefore quite fortunate that Ruka is a singer, not an actress. If she couldn’t tell a lie to save her own life, then she might completely forget about being an actress, and be asked to play roles such as a child, a teenage student, a young wife to someone, and Wonder Woman. “Director, how do I convince people that I can see through walls?”

Of course, given that Kayura was at kindergarten, and Ruka is merely 3 years older than Kayura, then Ruka would not have even reached 10 years old in Kayura’s story. It would therefore be very unfair to judge Ruka’s ability to lie – or, her professionalism – at such a young age. You see, I doubt if even Hayate could put up his “business smile” so easily when he was 6…

We may also understand just how difficult was Ruka’s childhood. She was already working hard as an idol when she was less than 10 years old. 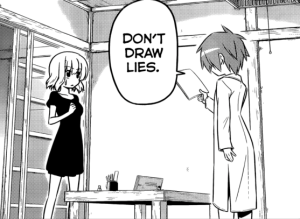 B – but all stories are lies, aren’t they?

Okay, I have gone a little too far here, so let’s get back to the real point. As Kayura knows that Ruka could not lie, her advice for the idol would therefore be “Don’t draw lies”. Of course, we shouldn’t do something that we are not good at when in a competition – if we could help, that is – but then we must ask: which part of Ruka’s manga has been a lie?

There are so many ways to interpret a manga, so I am not going to explore all the possibilities, but to only state my own conclusion.  I tend to think that the “love was true happiness” part was the lie, especially if the main character had to give up on her career to pursue such “true happiness”. My reason is quite simply that this was likely the only message Ruka was trying to tell through her manga, so if she was lying it must be about this message. Kayura states that Ruka lied about “something you can’t let go of”, and I think that this “something” is Ruka’s idol career.

I think it makes sense in a way. If Kayura thinks Ruka’s manga dream is “bullshit”, then by advising her not to lie, Kayura is actually asking Ruka to stop the “bullshit” on quitting the idol business for a manga career.

“So what should I tell myself this time?”

Now, Ruka is very prone to fall for lies – remember the “Hayate is a girl” fiasco? We might even expect that Ruka wouldn’t be able to tell truths from lies. Now, what if she has been lying to herself, that she doesn’t like singing and she has only been doing this for her parents and money? It is safe to say that she would be totally convinced by the lie. In other words, it could be that Ruka actually loves singing above everything, but just that she is completely convinced (meaning, fooled) by the lie that she doesn’t like singing at all.

As to why she has lied to herself in the first place, well… isn’t that the very thing every Tsundere does?

Of course, Ruka would definitely not be thinking about her idol business now, because she still has a Comiket to enter. Perhaps surprisingly, Kayura agrees to work on the manga with her in the Rainbow Village. “This is a hot spring, not your manga studio!”, says the owner. Now with Kayura helping Ruka and Chiharu helping Nagi, it is an indirect battle between Kayura and Chiharu. Now we might have the reason to their bickering in CTMEOY on taste of manga…

She has put her hair down, huh?

Speaking of Nagi, she is in some new trouble. Maybe or maybe not because of Ayumu’s summer cold, Nagi is a little sick. Yet as she knows from Chiharu that Ruka is (suddenly) doing well, Nagi can only do her best despite her illness, time limit and the thought of losing Hayate even if she wins. The horror is that Ayumu – who has been lying in bed with this or that part of her body going wrong – needs to be taken to the hospital. Let’s pray that Nagi wouldn’t suffer the same fate…

This reminds me that about 9 months ago, a certain Hinagiku managed to recover within hours from a cold.

Speaking of Hinagiku, she and Hayate (poor guy must have lost some sleep in the front trunk) and Dr. Kurosu have finally arrived at… Hokkaido. While absolutely nothing has been told on why they need to come here to make Ruka happy, but as it is Hokkaido… just don’t tell me that this is something about Kayura, or her family.