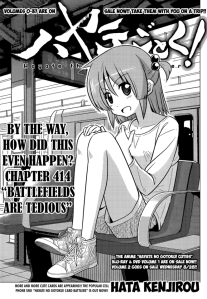 The “Kyoto and Ise” arc may have been concluded with the “Silky Meh” moment, but there are quite a few issues which need to be resolved. In this chapter, Hata has successfully resolved one, and then he starts addressing a second one.

The first issue – Isumi’s summoning of Sakuya – turns out to be rather straightforward. Sakuya arrives in Ise only to find that Isumi was merely asking her to return to Tokyo in helicopter no. 5 (which, so far, looks brand new). It is highly unlikely to be something Sakuya would consider “an emergency”, so we may understand why she would want to punch Isumi.

Still, with Sakuya around, the success of the trip on helicopter no. 5 seems guaranteed. Now, Sakuya has been spending some time with Machina. If she could get any information related to Athena from the butler, her presence at the Violet Mansion could bring some new shocks. This could be interesting.

So it was all about a video, all right…

The second issue is of course what has led to the “Silky Meh” moment we saw in the last chapter. While I do not see a director shouting “Cut! Good take!”, it appears that we could be quite close to home.

The thing is that, certain details of the “Silky Meh” moment – Hayate embracing Ruka from behind, and the words Hayate whispered to her – appear to be Risa’s idea. Upon realising that Ruka is an idol, and that she is in love with Hayate, Risa has decided to make a “battlefield” video because it would be amusing.

This from someone who is supposed to be stupid.

You know, Risa would have a very successful career as a paparazzi, because she ticks all the boxes. She has the ability to see through the disguises of idols. She can sense correctly the feelings of a girl for a boy. She has a clear idea on how to make an interesting piece of news. Most importantly, she is eager to entertain herself by causing troubles to others. These are all essential for the paparazzi.

I’ll make it clear here: I dislike paparazzi. As such, I am rather disappointed that Risa is apparently moulding herself into a paparazzi. What makes it even more annoying is that Risa is trying to make an amusing video by making use of a girl’s feelings for a boy, and dragging three of her friends (Hayate, Nagi and Izumi) into a DIY “battlefield”. Yes, Risa has always been mischievous, “black” and a bit of a little devil, but this time she is simply going too far. 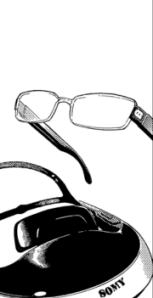 Anyway, Risa ordered Izumi to confront Hayate in the “I am the Butler and the Butler is Me” machine. It is supposed to be Ruka’s invention, so I have no idea why Risa had a set with her, and that she knew exactly how to use it – unless, of course, it was not Ruka’s invention in the first place.

Clearly, Risa was betting on Izumi’s ability to self-destruct to create a “battlefield”. You might argue that it worked perfectly: as soon as Izumi contacted Hayate, she basically asked him to lend her his maid uniform. This got Ruka’s attention (who was very sensitive of other girls’ feelings for Hayate), and the two suddenly felt awkward in each other’s presence.

Ruka being Ruka was quite aggressive as she said to Izumi that she would want to marry Hayate should she win in the doujinshi competition. The part on the doujinshi competition wasn’t really the point, as it seems that Izumi had no idea what she was talking about. The key point was that Ruka declared possession of Hayate. We could almost read it as a “hands off” warning, and Izumi – who also had a not-so-secret crush on Hayate – seemed to realise this.

Consciously or unconsciously, Izumi touched the “battlefield creation switch” installed by Risa. The very loud line – “What did you say, you thief?” – was clearly a declaration of war. In any case, it is likely that Ruka would think Izumi was a threat who would go as far as to call her a “thief”. This would not end well…

We might not even be that close to the “end” at this point, because we still lack an explanation as to how Hayate and Ruka ended up “acting” according to Risa’s script. There are a lot of possibilities, and we would need to wait and see what has happened next.