Here we go! A brand new season of Hayate no Gotoku! anime!

As we all know, this new anime series is subtitled “Cuties”, and that each episode would feature a different hero(ine) on a different “route”, with a different ED as well. We already have an episode list up to and including Episode 10, and no matter what “… and more” is supposed to mean, we should be confident that every girl in the picture below would have at least one episode to herself. 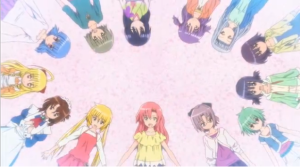 It would be very difficult to put everything into a coherent plot, I would say, but it shouldn’t be too big a problem if each episode is nicely done – Doraemon never had a coherent plot, but we enjoyed the anime for decades. Then again, I think it would be brilliant if we could see some continuity between the episodes.

We already know for sure that each episode will have a different ED, but I think it is equally certain that we would have the same OP sequence throughout the anime. After all, you do not waste your resources to draw 2 minutes worth of high-quality animation only to use once.

Well at least she can run…

Let’s face it, the OP sequence is rather Hinagiku-centric. The song is sung by her, and the emphasis on her is such that a person passing through would suggest that she is the main heroine – at least of this anime. To sit up first in a group, and to run towards the apartment while everyone is watching her, are the signature moves of the main heroine.

Whether you like the OP sequence depends on whether you like so much focus on Hinagiku, really. The very-hard-to-please Doughnut Gunso would tell you, however, that he/she (I haven’t given away my gender, have I?) has a lot of reservations about it. The thing is, it is simply quite impossible that Hinagiku would be the main heroine of this anime: with each episode featuring a different main heroine, and that the main heroines of the series have always been Nagi and Maria, what would make Hinagiku the main heroine out of her own episode? 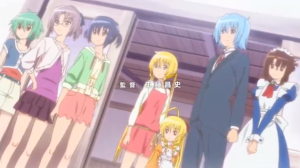 “We are not forgotten…”

If Hinagiku is indeed not the main heroine of this anime, the Hinagiku-centric OP would become a false representation. This is not going to please anyone. In fact, this is worse than the Hinagiku ED in Season 2 – at least it appeared that Hinagiku was the main heroine in the first half of that season.

The good news is, at least most if not all of the “Cuties” make an appearance in the OP. This is in sharp contrast to Can’t Take My Eyes off You (abbreviated as CTMEOY below, for your sake), in which the OP made Hayate and Nagi into Adam and Eve. In the “Cuties” OP you are almost guaranteed to see your favourite girl at least for one second – unless the girl in question is Saginomiya Ginka.

Whether CTMEOY is canon has always been a subject for debate. There has been enough reference to the current Doujinshi saga that makes the “canon argument” plausible, but Episodes 3 and 5 certainly complicate things by animating manga chapters from a long, long time ago. This has shaken up the timeline badly, and unless we are going to accept the fact that Hayate and Hinagiku have had two “first dates”, the canonicity of CTMEOY must be called into question.

We might expect Cuties to do a better job with timeline than CTMEOY, but it hasn’t. Instead of clearing up some ambiguity, the first episode of Cuties has made things even more ambiguous. Before we mess ourselves up, let’s see if anything could become clear. 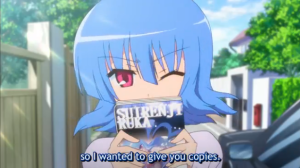 So it indeed happened…

To begin with, when is Cuties supposed to take place? At least two pieces of evidence would point to that it takes place after CTMEOY. The first is that Ruka has told Hayate that the DVD of her Las Vegas concert – featured in Episode 11 of CTMEOY – is out, and we know a DVD must come after the concert. The second is that every student is wearing the winter school uniform, while they wore the summer uniform in CTMEOY. Both point out that Cuties comes after CTMEOY.

And then there comes a serious problem: in CTMEOY we saw that Nagi has moved back to the Sanzen’in Mansion, while recent manga development has also suggested that such a move was justified. Yet in Cuties, which I believe to take place after CTMEOY, Nagi has returned to the Violet Mansion, living happily with her friends. So what’s with moving back to the big mansion? 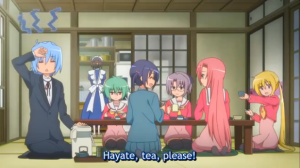 This is the kind of anime you are watching.

Episode 1 of Cuties is basically the animation of three manga chapters: Ch. 303, Ch. 352 and Ch. 353. Instead of shamelessly copying my previous reviews and bore you all to death, let me simply highlight some modifications as well as some interesting facts. If you want to know what has happened in those three manga chapters, please feel free to visit the links above. 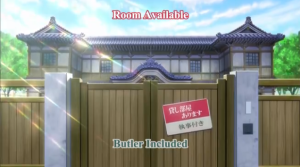 Now Yukiji can rent one.

While we know that the Violet Mansion is fully occupied in the manga, there is a sign at the beginning of this episode suggesting that room is available. It is most likely because Ruka has moved out. Indeed throughout Episode 1, we never come to see Ruka in the Violet Mansion. It is reasonable: after all, Ruka is only allowed two weeks at the Violet Mansion before resuming work as an idol, so she is likely to move out after Comiket. 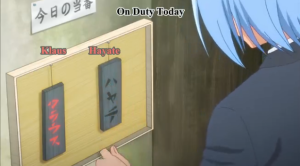 “Get your ass into work, Klaus-san!”

Funny enough, Klaus’ name is on the duty board alongside Hayate. It means that Klaus is expected to work at the mansion, but we never saw him fulfilling his duty. In a sense this is a good thing: we simply cannot allow an old, single, male butler to live with so many young girls. Wait, why should Hayate be allowed? 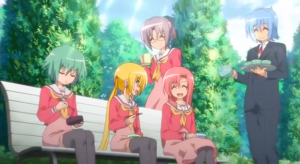 They surely have fun together.

We can see that Hinagiku, Nagi, Chiharu and Kayura – in other words, the Hakuou girls who live at the Violet Mansion – would have lunch together, while Hayate serve them all tea. This is a huge, huge surprise on Nagi’s part – it shows that she can be a lot more sociable than we would have thought. Perhaps this is the true benefit of Nagi moving to the Violet Mansion. Meanwhile, it looks like Kayura is the real lone wolf…?

Put your hair down please.

Apparently it takes about half an hour for the girls to take bath – at least this is true for Ayumu and Hinagiku. For the matter, neither of them take their hairpin(s) off while bathing. Fanservice scenes are… totally unnecessary.

In this episode Nagi has fallen asleep before 0:30, instead of 2:30 in the manga. Given that she wakes up at 8:30, Nagi has eight hours of sleep. When compared to Hayate (1 hour), Maria (5.5 hours) and Hinagiku (2.5 hours), the sleeping habit of Nagi is actually the most healthy – at least in this episode.

We know that Hinagiku helps Hayate with his revision. In the manga, it is Hayate who asked for her help in Ch. 340. In this episode, it is Hinagiku who offers to help him. Instead of highlighting Hayate’s trust in Hinagiku, this episode chooses to highlight Hinagiku’s gratitude towards Hayate and what she would do to return his favours. The practice question which troubles Hayate involves a mathematical formula and the unknown x. Let us hope that it isn’t the same question as the one he faced when he was staying at Hinagiku’s house.

Nagi being Nagi doesn’t give up any opportunity to tease Ayumu. The Hamster seems to take it very seriously as she pretends that she is sick as well. Mysteriously Hayate believes in her acting. Either Ayumu’s acting is so good (unlikely as she fools nobody), or that Hayate is too stupid to tell truths and lies apart. 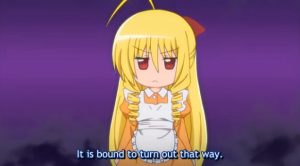 After four years of wait, Athena speaks again! It appears that Kawasumi Ayako-san has adopted an even higher pitch than in Season 2 while speaking, which makes Athena sound more like a doll than the greatest goddess on Earth.

We must feel sorry for Maria. In the manga, only Maria noticed that Hayate was sick, and she alone showed care to him and relieved the duties on his shoulders. This was the standout moment of Ch. 353. In this episode, all the girls show their care to him, and although it is still Maria who offers him medicine, she is no longer the only one who cares. I wouldn’t like it too much if I were a Maria fan.

My favourite frame in the OP.

To be honest, there is nothing spectacular about this episode. However, it serves nicely as the introduction to the whole season, and I think we cannot ask much more from it. The artwork has been fairly good as well – at least, I do not see anything which resembles the abomination of CTMEOY Episode 3. Still… 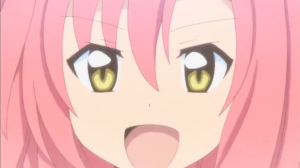