Come on, Hata! Strip her off!

After a little spin-off that is Ch. 400, we are back in the main story. It is almost like that nothing has happened last week. Doughnut Gunso will not decide for you if Ch. 400 was a dream or a very early April Fool’s joke.

So Nagi is in Hokkaido, barely done with the predicament at Kayura’s home. In the end she has told Kayura’s father that the AI was missing from the video game, and apparently our poor boss can only dig deeper in his pocket to finish the game. Until the game sells like mad, or unless Kayura’s father wins a lottery, they would surely be in debt. Is there a lottery with a prize of half a billion yen, anyway?

Still, Kayura’s father does have enough money in his bank (for now) to pay for Nagi’s bus fare. Kayura has planned for Nagi to board a bullet train in Shin-Aomori so that she could finally go to Kyoto. The bus isn’t a fast ride, so they have not yet reached Hakodate – meaning, they are still in Hokkaido – even after Nagi has waken up from her nap.

There is a price for acting cool.

Meanwhile, Hayate is worried about Nagi. She is his “life in itself (sparkling!)” anyway, so it is natural that he should be worried. But then, couldn’t he do something more to stop Nagi from leaving home in the first place? Well, I am sure he could have done something more – it is very easy to do something more than doing nothing.

Maria chooses this moment to reassure Hayate that Nagi would not be fine because she is an “indoor cat”. With the smile on her face, you might think that Maria is merely making fun of Hayate, but it could be more than that. For some reason, Maria seems to enjoy seeing Nagi struggle with her life. The best possible explanation is that Maria is delighted that there are trials which would force Nagi to grow up, but the worst possible explanation would be… well, I don’t know.

In any case, Maria decides that she would be going to Kyoto and save Nagi. Here comes the question: why Kyoto? Maria already knows that Nagi is now in Hokkaido – in fact, she is the first of Nagi’s “guardians” to be informed the whereabouts of the young lady. If Maria is to save Nagi, surely she should be going to Hokkaido? If Maria were to meet with Nagi in Kyoto, then what is the point of it, as Hinagiku and Chiharu are already there? 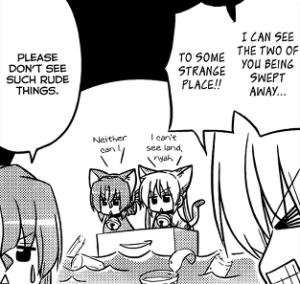 Hayate doesn’t seem to have much faith in Maria. After all, she is as much an “indoor cat” as Nagi is – both of them had problems boarding a bullet train, remember – so if the lady would be in trouble, the maid would also be in trouble. Yet, as Hayate decides to “insult” Maria in her face, the maid would surely try to defend her own pride.

Things get even more complicated as yet another “indoor cat” decides that she would be the one to save the day. Athena, in much more causal wear than usual, volunteers to save everyone. Nobody knows what has motivated her – unless you try to argue that it is because she sees that Hayate is in trouble.

One might also try to argue that Athena is not the “indoor cat” Maria and Nagi are. After all, she is arguably the most intelligent girl in the series, she has long graduated from Hakuou Academy, she has (for a while) been the young Chairperson of the school, etc. etc. Well, one must ask why Maria remains an “indoor cat” despite having similar achievements, and most importantly all these achievements are irrelevant: Athena is now in child form without her memories and skills.

So, not the greatest goddess on Earth…

The interesting thing is that Hayate is showing no faith but a little rudeness in Maria and Athena, who are in very high order of Hayate’s affection. He may have a crush (or a relationship, in Athena’s case) on them, but when things matter Hayate would opt to rely on Chiharu and Hinagiku, whom some insist have absolutely no chance of “winning” because they are not Nagi or Maria.

It is quite a miracle that Chiharu and Hinagiku still have Hayate’s trust, given that they have failed to escort Nagi to Kyoto in the first place. Either Hayate is not blaming them for the failure, or that he is so desperate that he could only give these “losers” a second chance. Then again, we do not know what Hayate wants them to do. Are they expected to take care of Nagi, or Maria and Athena, or all of them?

Indeed, with no way to contact Nagi or to teleport themselves to where Nagi is, Chiharu and Hinagiku could only sit down and have dango and tea in Kyoto, where they have successfully reached. While reflecting on the whole thing, it is pointed out that Nagi has boarded the same train as they did, so the question has become that how Nagi ended up taking a plane to Hokkaido instead. Nobody would have an answer to that, I suppose.

There is nothing they could do now. Their trip was for Nagi’s sake, so it is now like attending a birthday party without the birthday girl. To fill the void (and make the travelling cost a little more worthwhile), they have decided to go sightseeing. Hopefully they could have some interesting experience that could help with Nagi’s manga, because this is now the only thing they could do for her. As I have mentioned before, they are utterly useless in taking care of Nagi and/or Maria and Athena unless they could reach Kyoto.

The chances of Maria and Athena reaching Kyoto diminish with every passing second, as neither of them seems to have a proper idea on how to reach their destination. In fact, a taxi ride is the best chance for them, although it would be horribly time-consuming and expensive. The problem is that Athena could get sick if she take such a long ride – so at least she knows that Kyoto is far away. Maria then suggests they could take a plane at a nearby airport, but questions remains if she really knows which airport she should be referring to.

To hit the final nail on the coffin…

There is no airport in Kyoto. #InterestingFact

It doesn’t look like that Nagi could reach Kyoto either. Yes, Kayura has been with her on the bus ride, but something happens after the short break. Despite Kayura’s call, Nagi has not board the bus again. The driver does not see the problem because the head count is right – it is only that Nagi has been replaced by (who else?) Isumi.

You have to be deaf not to have heard it.

To say that Nagi didn’t hear Kayura is highly inconceivable. I do assume that Kayura has spoken loud enough for Nagi to hear, and she was walking away with a hand gesture I would take as “come along”. I would rather believe that Nagi has intentionally decided to stay behind should it not for the margin line to suggest otherwise. Apparently logic fails everywhere in this arc, and I must say I am not very pleased with such madness.

Now Nagi is far away from any available help. If we are to remain sane as we try to predict what would happen next, I would say that the most likely outcome would be for Hayate to finally leave the Violet Mansion to save Nagi by himself – honestly, there is no point relying on anyone any more. Of course, he would have to leave Ruka for a while in order to save Nagi, but it doesn’t mean that Hayate would stop helping Ruka – it could resume after the rescue mission.

I can’t really tell what gets Hayate stuck in the Violet Mansion, as Ruka hasn’t ordered him not to leave her until Comiket is finished – as far as I know she only wanted him to marry her if she wins. In fact, the very order to help Ruka came from Nagi herself, so when Nagi is in danger Hayate should know better than to stay home and do nothing. Obeying orders blindly is not real loyalty.

You just have to let go…

Now it is a problem for Hayate and Ruka. Either Hayate is to persuade Ruka to let him go for a while, or Ruka is to stop looking pissed and tell Hayate to go. In fact, allowing Hayate to go and save Nagi would be better than forcing him to stay with her: Hayate can provide no support to her when he is worrying about Nagi.

I don’t know why it has become a problem for Ruka at all. She is not the kind of evil girl who needs a face heel turn right now… or is she?