He looks cooler than he really is. I give him that.

You can hardly say that Nagi and Hinagiku are not on good terms. Nagi wants Hinagiku in the mountains, and there Hinagiku goes – alone. Amusingly, Hinagiku looks more like going shopping than hiking. I would expect her to at least wear a pair of long trousers if she is going into the mountains.

Needless to say, Nagi has already told Hinagiku that she bets Hayate on the Comiket competition, and because of that she needs Hinagiku to teach her how to draw a good manga. I don’t mean to be picky but this seems quite unnecessary for me. Nagi doesn’t need to explain anything to Hinagiku in order to get her advices – she could just tell her that she wants to make a better manga. What I mean is that, I don’t understand why Nagi and Ayumu opt to use Hayate as a means to ask for Hinagiku’s help.

Hinagiku: “Don’t make ME worry about YOUR butler, Nagi.”

Hinagiku then brings up two questions: “What does Hayate-kun think of this competition?” and “Who does Hayate-kun want to win?” Nagi and Ayumu have no answer to them, which shows that they have never thought about it before. In other words, Hayate’s own feelings and thoughts have been overlooked. If you remember, I have already mentioned this problem in my Ch. 390 review, and it takes two months for any character to address this problem. To top things, the said character happens to be Hinagiku.

You might think she is unworthy of being Hayate’s partner for any reason, but there is one thing nobody can deny: Hinagiku really cares a lot about Hayate. While the world is either treating him as a prize, or is not thinking about anything at all, Hinagiku is concerned what Hayate would think about the competition. Once again she steps up to address something which I consider a problem. What else do I have to say about this girl?

As Nagi and Ayumu start to debate over the subject, Hinagiku mentions to Chiharu that Ruka should have realised that the winner of the competition has already been decided. For the sake of a more enjoyable manga reading experience, let’s not break the fourth wall and confirm that she is right just yet.

Quite a lot of Japanese porns start with a massage, you know…

Hayate then asks if Ruka wants anything else. Ruka makes use of this chance to make a (rather lame) joke on Hayate’s underwear. Technically speaking, Ruka has already seen Hayate completely naked, nipples and skin and everything except his… you-know-what, so I am not sure if seeing his underwear could get Ruka excited. Come to think of it, we have seen the underwear of almost any girl in this series, but have we ever seen Hayate’s? Now it sounds more interesting than anything else…

As her joke doesn’t yield anything positive, Ruka dismisses Hayate in order to focus on her manga – she is indeed drawing manga in a hot spring inn, so rich idols are rich… As Hayate reminds her not to force herself too hard, Ruka thinks of something to ask him: “Who do you want to win?” So this is the second time in the chapter that someone is thinking of Hayate’s own thoughts on the competition. In all fairness, credits are due to Ruka as well, but as she comes second after Hinagiku, I give her less. 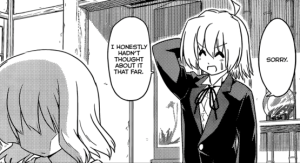 As expected of Hayate…

I don’t know what you would have expected Hayate to answer, but I think that it is quite natural that he “hadn’t thought about it that far”. He is too busy to think about such things, and judging by the way Nagi and Ruka treat him in this competition, it isn’t that he could change anything according to his preference anyway. If something cannot be changed no matter how hard we think about it, it is indeed wiser to stop thinking about it altogether.

An alternative interpretation – the one Ruka takes – is that Hayate doesn’t even care who wins, because no matter the outcome, there would not be any effect on Hayate’s life. If Hayate’s life is not to be affected, then it means that he has already decided not to quit his butler job even if Ruka wins. This could well be what Hinagiku meant when she said that the winner of the competition has already been decided. The whole thing might sound like cheating on Nagi’s side, but it was Ruka who started the whole betting thing, so… she is not really in a position to complain, is she?

Seriously, given that it is Hayate, my bet is that… he is too brainless to think of anything at all – including whether to quit his job should Ruka wins.

Emm… to become a great mangaka?

Unfortunately, Ruka is not learning her lesson. Instead, she takes one step further: a long time ago she has made Hayate to promise her to grant her a wish, so here is her wish – “If I win the competition, then marry me!”

Hayate is shocked. He simply doesn’t understand why he has to marry Ruka if she wins. Ruka then blames him for being so disinterested in the competition, and for not feeling that anything is on the line. The thing is that, Hayate should be perfectly entitled to think that nothing is on the line. Once again, Ruka is showing the ugly side of her love: while her passion for Hayate is unquestionable, her ignorance of Hayate’s feelings is also unquestionable… 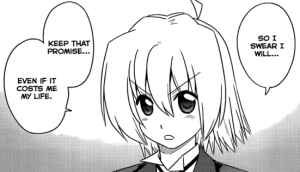 A textbook case of “Too Dumb to Live”?

The chapter title has suggested that “to be strong is to keep one’s promise”, but his promise to Ruka is absolutely brainless. What if Ruka’s “crazy wish” is for him to kill Nagi? Would he still keep his cool face and declares that he would keep his promise “even if it costs me my life”? Granted, such a “wish” would be outright evil, but the way Hayate gave his words to Ruka makes you think that he would destroy the whole world for her unless he is killed.

Of course, I agree that if you have made a promise to someone, you better keep it: keeping promises is indeed an honourable thing to do. The real issue is that we should never make promises to people so easily: either you set limits to what you would do for the other party, or you set limits to what you would suffer should you break your promise. This is not only about making life easier for yourself, but to prevent yourself from becoming a disgrace.

Anybody with a functional brain should never have put himself into a “choice of the lesser evil” between lost honour and lost life.