When she is in maid uniform she puts her hair and glasses down.

NPC A vs. Harukaze Chiharu – as it happened

Preamble – Good day! We are having a rather interesting chapter of Hayate no Gotoku! in which something rarely mentioned is mentioned: football! How many times have you seen football mentioned in this series? Twice, if I remember correctly. We had Ayumu acting as David Beckham in Ch. 110, and Izumi showing her underwear while trying to kick a football in Ch. 192, but no more. This is not a record to be proud of for such a long series, especially when we all know that our best friend Conan-kun has been playing football from time to time. Presumably his father taught him the Art of Messi in Hawaii.

To celebrate the third reference to football in the series, Doughnut Gunso is once again writing Chapter Review in the so-called “new format”. A certain moron once commented that this was an attempt to write a panel-by-panel review for a Hinagiku chapter – proof that I am nothing but a Hinagiku fan. The bolded words contain incorrect information, so please lie down before you hurt yourself, man. You can do much better than this to discredit me, I would say.

Are you sure this is for high school students?

Ah, I want to forget about that idiot, but how can we really forget about idiots when there is an idiot in the name of Hibino Fumi making appearance in this chapter? No, we can’t. We talk about them, we have a good laugh at them, but we will never forget about them. Why would we, anyway, seeing that she is one of the very few characters who are not considered clever? No, wait – she could do complicated maths in her head, couldn’t she? So how come we say that she is not clever? Well, to quote Qui-Gon Jinn, “the ability to speak doesn’t make you intelligent”. So the ability to do maths doesn’t make you intelligent as well!

Our dear Fumi might not be clever, but at least she is a good student. She is doing her homework, after all! Compare Fumi with our Hakuou students at the Violet Mansion, whose “homework group” appears to have already failed, I must say that the would-be Student Council President has some merits to take!

So her Biology homework includes a plant and animal observation journal. For some reason, she chooses to observe an animal species called Homo sapiens, and she is observing them in Animate, “the largest retailer of anime, games and manga in Japan” (Wikipedia). And it is here where the game begins!

Poor guy doesn’t have a name.

Here comes the home team – NPC A. Apparently a male, with the word “mob” scribbled across his face. Obviously Hata is not being very kind to him – arguably he treats NPC A as bad as Hayate’s parents. The very best thing about him is that his face is not a shade of black. “Why he is the home team?” you may ask. Well, it is because he has been working at Animate for longer than the visiting team!

And that means our visitor is a new comer! It seems that it is indeed Chiharu’s first day working at Animate. We know from the new anime that she manages to earn 14,150 yen from Tsugumi Ruri, so she is of course a very capable member of staff. A huge bonus point is that she is very cute – so cute that the otakus, who have 2D girls as their “wives”, simply, well, “Can’t Take My Eyes off You”. Doughnut Gunso sincerely apologises for the pun.

PEEP! The match is under way! So, what kind of match we are talking about, anyway? The manager has told us that as the employees have similar interests, they would fall for each other. What we are watching here, therefore, is a love match! 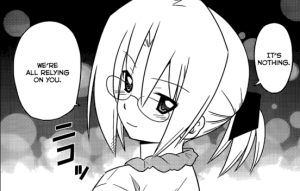 GOAL!!! NPC A 0:1 Harukaze Chiharu (Page 8) So soon into the game has Chiharu scored, and she didn’t even mean it! She was merely buying a can of coffee for NPC A, and the ball went straight into the net! What a shocker for NPC A! His defence was non-existing. Or, did he mean to defend at all…?

NPC A intends to make a comeback with a discussion on summer vacation. Suddenly Isumi enters the commentary box and describes Chiharu’s defence as “top-notch”. How did she know about that? Wait a minute, why is she here in the first place?

After a few exchange of passes Chiharu has lost the ball to NPC A! She asks where he would go during summer vacation, and that creates a semi-chance for him! However, he doesn’t seem to have a clue on how to make the best of the chance, so he wanders around the penalty area and ends up taking a long shot, which is saved. Chiharu’s defences truly are top-notch, but let us not forget that NPC A’s attack has been feeble.

PEEP! PEEP!! PEEP!!! Half time. See you in a few minutes. Half time emails… there is nothing of that sort. Instead, there are quite a few Candy Crush Saga requests for me to respond. It is such a strange game that a girl who has not contacted me for years now frequently asking me to send lives to her. I tried a few rounds myself, no luck today.

It seems the hairdryer treatment worked.

The second half kicks off with NPC A on the attack again. He really wants this game levelled, doesn’t he? He plays some tiki-taka around the final third with a discussion on an anime the visiting team likes. It seems that he has recorded that stuff on VHS. VHS! Is that something in your time? I am asking this because, well, some kids in my Sunday School haven’t heard of floppy disks.

OH! NPC A is making an aggressive pass! He is inviting Chiharu to his home and to take the tapes! Isumi is sure that it won’t go through the defenders, but she is wrong here! The pass has gone through, Chiharu agrees to go with NPC A, she is happy with the tapes and she comments that he is kind!

NPC A gets into the penalty box! He is through on goal! He is one on one with the keeper! NPC A takes his shot, he is going to confess to Chiharu, and… 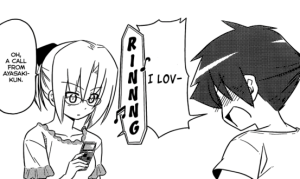 WHAT A LAST-MINUTE TACKLE BY THE DEFENDER! And yes, it is Ayasaki Hayate! He makes a phone call right at the moment, and asks Chiharu to buy some eggs as she returns. Eggs, I ask you! Why didn’t he buy the eggs himself if he so wanted them?!

NPC A is not happy with the tackle, and he is appealing for a penalty! The referee is having none of it. NPC A is shocked! He is told by Chiharu that she is living with Hayate. What a howler!!

PEEP! PEEP!! PEEP!!! And the match is over! NPC A 0:1 Harukaze Chiharu. What a game! Chiharu scored an early surprise goal, and NPC A tried to fight back without success. He has collapsed to his knees in tears! Then again he has nobody to blame but himself. He should have defended better than that.

He has only played for less than a minute.

Man of the Match: Ayasaki Hayate. Nobody even knows that he exists before that tackle, but his presence on the phone made sure that Chiharu’s defences remain intact. That said, we are not sure whether his “protection” of the girls in the apartments really is a good thing, because he is (unintentionally) stopping them from dating other boys, while he certainly won’t be dating the girls himself. Still, maybe Chiharu deserves someone better than NPC A in the first place.

That’s all for today’s game. Thank you very much! Have a nice day!