Sometimes she is just too annoying…

When was the last time anything about Wataru’s progress on his new store was mentioned?

Arguably you could say it was the previous chapter, but here I am talking about a major addressing in a chapter, instead of casual appearances in a panel or two. A quick search on the previous chapters ends with a shocking result: unless I am very much mistaken, the last “Wataru’s business chapter” was Ch. 345, published on 16 November 2011. In other words, it has already been over a year since we have heard anything substantial about him.

Perhaps as a compensation to one of the very few male characters in this series, he and his business have been given more than half a chapter here, while we are very busy anticipating some important information to be revealed. Given how important the revelation is supposed to be, I guess – with all due respect – nobody really gives a damn about Wataru’s business right now.

Sometimes, the timing of an appearance really matters. 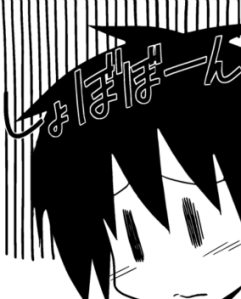 So that’s how it looks when your business fails.

The first thing to note here is that Wataru has opened his shop unexpected early. In Ch. 345 he has told us that he planned to open his shop in mid-August. However, we are still in late-July in Ch. 387, so Wataru is at least three weeks ahead of his schedule. As we have already seen in the movie and the new anime, Wataru’s store is located in Akiba, selling doujinshis and renting DVDs.

A quick start doesn’t guarantee good performance, however. Wataru and Saki find themselves struggling on their very first day into business, as they only had three customers and made a total sales of 1500 yen. The narrator reasons that the location of the store is the major problem, and of course a store which is located in an alley can’t draw too much attention while the majority of the people would take the main street.

That is, to cry endlessly for help.

Obviously, some promotions would do the shop a lot of help, but Wataru is perhaps too depressed to think of anything else. In fact, not only he is upset at the shop, he is even close to tears at dinner. After all, he has given up school and has borrowed 100M yen from Sakuya, so a failure is unaffordable. The pressure could be a bit too much for a 13-year-old boy.

Saki is worried. As a caring maid she wants to help him in whatever way she can. As her words of encouragement (or provocation?) do not work, she knows that she has to do something more substantial. However, she doesn’t know a thing about business. It seems that there is only one thing she could do… 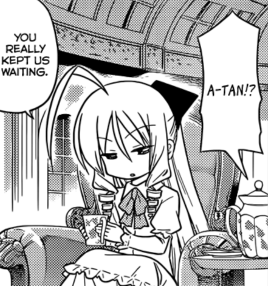 Meanwhile, Hayate has arrived at Mikado’s castle following Aika’s lead. To his surprise, Athena is here as guest as well. Apparently, Hayate – first love, butler and papa – didn’t know where Athena would go before heading off to the Rainbow Village. In any case, Hayate and the others did not ask Mikado to look after Athena.

Mikado says that it is not yet the time to reveal why Athena is here, as they have more important issues to talk about: the Sanzen’in inheritance. The key to Nagi earning back her fortune, and (possibly) the key to Hayate finding a love life independent of Nagi, is to be revealed. However…

It is amusing that calls could reach these mountains.

Hayate’s phone chooses to ring at the very moment. Of course, the call is from Saki, who has recently (it is still like 10 months ago) shown that she could be very persistent when she asks Hayate for help. As a matter of fact, Saki doesn’t seem to have anyone other than Hayate to turn to when she is in trouble – she could at least consult Sakuya, right?

Hayate is not helping himself here. Okay, he might not have expected the first call, and he has turned the phone to silent mode after that, but clearly he should have turned the phone off after the second call. If he reckons that he is having a very important conversation with Mikado, he should put everything aside until Mikado has finished talking. The failure to do so not only interrupts the “very important conversation”, but also highlights Hayate’s idiocy.

Someone please spank this guy…

Or maybe it has nothing to do with Hayate’s intelligence, but his indecisiveness to turn down a girl’s request. We all know that Hayate is not entirely capable of saying “no” to girls, no matter how ridiculous their requests are. Sometimes he is seen wanting to say no, but as his body knows only to say yes, he is torn between “yes” and “no” and he doesn’t know what to do.

Brainless or indecisiveness, he is still pathetic at Mikado’s castle. He is not able to stop the phone from becoming a nuisance, and while Mikado tells him to answer the phone (so that he could hang up shortly after), he allows the call to drag on. When he panics at Mikado’s shoutings, he accidentally reveals that he is talking to Mikado, leading the latter to receive a call from Saki as well. In short, Hayate’s handling of the matter is heavily under-par, as the butler of the Sanzen’in household.

“And never come back to our house, you idiot!”

As Saki makes the fifth call of today – the fourth for Hayate – Mikado has run out of patience. He decides that this is not the day to talk about the Sanzen’in inheritance, as the moment has already been killed – Athena is yawning, Aika is playing games on her cellphone, and Hayate himself has become more interested in Saki’s wants than the Sanzen’in inheritance. Hayate is told to go and help Saki sort out her problems.

Mikado comments that Hayate is haunted rather than being unlucky, but I disagree. As suggested above, I think that Hayate contributes to his own bad luck by his own idiocy. Audience of the Final Destination series would know that Death’s plans to kill people are often aided by the victims’ own stupidity: putting liquids near electronic devices, chasing after pigeons, using the tanning beds without supervision, using escalators in a huge explosion (All hail 4D movies!)… Sometimes, people are just too dumb to live.

The dumbest end ever?

A meeting that looked so promising in the beginning ends with Aika talking about her trip with her fiancé two days later. Athena leaves in silence, clearly disappointed that nothing important has been revealed. As for us readers, I think many of us would consider this a let down, given that this arc has raised so many questions, but answered so few of them.

Just take a look at some comments I see on Twitter…

And just when we thought we could move on with the actual plot, Hata is back to his usual self. Why do I even bother #hayate

Chap 387: Hata, you mean to tell us… it's filled with random fillers, even those taking place when it's supposed to be serious? #hayate

I think the most annoying thing here is that, our dear Hata seems to think that this is very funny. By saying that “this is the reality of this manga”, he is saying that he is deliberately trolling us. The fact is, being a comedy doesn’t mean that the series couldn’t get serious when it has to be. Here we are dealing with a core part of the plot, so how could Hata think that he could mess this up in the name of a comedy?

If he thinks that this topic is too serious for a “comedy”, then wouldn’t it be better if he never raised it in the first place? If he is to address this issue, then he has to treat serious issues seriously. Gags are not supposed to be made on serious issues, otherwise the credibility of this series is lost. I mean, how are we supposed to take the series seriously any more, if we could reply to any questions or debates with a mere “Why so serious”?

Let’s take an example right at the end of this chapter: the tagline suggests that something fun is going to happen in the next chapter. Should we believe it, or not?