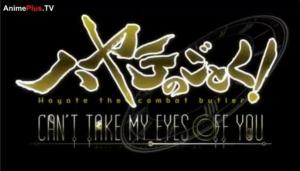 One simply has no idea of a better picture.

Hello world! Doughnut Gunso reports in following an extremely satisfying trip to Australia. People who know me personally would know that it is a country I have dreamt of going for so many years, and I am glad to say that this country deserves the hype I have built on it. I have been to overseas trips a few times and this trip is easily one of my very best.

To tell you the truth, I still have my soul in Australia, and there is a bit of jet lag for me to shake off. In other words, I am not physically or mentally fit to write Hayate Reports. It could mean that this Review would be of a lower quality than before. I hope you wouldn’t mind.

Another thing is that, what do I do with Episode 7, now that I have skipped Review on it? I guess the simplest way is to ignore the fact that I have skipped it at all. It means that, well, I won’t be writing an Episode 7 Review in the future. For your information, the same goes to Ch. 385.

So, let’s go to business with Episode 8! 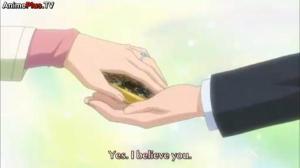 So the super lucky Yukariko gave “bad luck” to her husband.

Whatever the reason, however he managed to do so, Shin Hayek finally persuaded Yukariko to give Kurotsubaki to him. We never know whether his love for her remained true or not, because there was the car accident, and you know the rest… Sometimes, we just don’t have the chance to repent our sins, so it would be wiser to not hurt or betray people you love at all.

Tsugumi is lectured and kidnapped by – for want of a better nickname – Birdman. Unfortunately, he has not picked the best moment to act, because three of the most powerful people in this series – Hayate, Isumi and Hinagiku – are all around. The melees of Hayate, the spells of Isumi and the Shirosakura of Hinagiku prove to be too powerful for Birdman. Soon he is outmatched, and he flees without grabbing Tsugumi along. 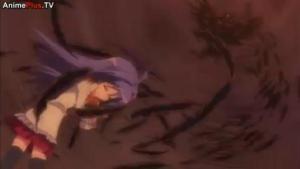 Maybe he simply wants to show off his costume.

While Birdman’s appearance offers the first real fight of the series (Tsugumi’s Systema humiliation of Hayate doesn’t count), I fail to see why he wants to take Tsugumi away. She could be failing her mission, but a hairdryer treatment should be enough for now. The mission to lure Nagi to the US would never succeed if the only one who is doing the job is taken away – unless Birdman has decided that Tsugumi is to fulfill her new role as the bait by being kidnapped.

Tsugumi is not happy with her rescuers, especially Hinagiku, for their attempts to save her. After all, a hostage is hardly safe if she is thrown to the ground and nearly had herself beheaded. However, the incident seems to have her thinking about the “new role” suggested above. The only question for her is: would Nagi be worried if her “younger sister” is kidnapped? Hayate’s answer is yes, although it is debatable if it merely is an obligatory answer. 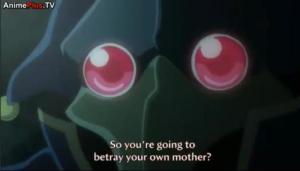 While walking alone on the streets, Tsugumi meets Birdman (whose real name appears to be Shidou) again. In an exchange of words, we know that Tsugumi doesn’t want to harm Nagi, but she could risk betraying her mother. Tsugumi intends to solve this dilemma peacefully, so in a way we are reassured that she is not necessarily “evil”. But then, sometimes great harm could be done even when “no malice is intended”.

One more trivial but interesting fact is that Shidou a.k.a. Birdman travelled via a budget airline. It means that he should be human, because only a “normal” human being without a weird costume would be allowed on aircrafts. It also means that, whether he could fly or not, he couldn’t fly too long a distance. 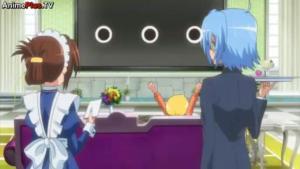 That awkward moment when someone else is kidnapped.

The next morning, Hayate is told the shocking news that Ayumu and others (What “others”? It’s Hinagiku only…) have already departed to New York and they plan to hitchhike to Las Vegas. Whether this is possible, or whether they could make it in time to attend Ruka’s concert (Do they have tickets, anyway?), would turn out to be irrelevant, so let’s not bother with it.

Apparently Nagi feels lonely, but even if we do not count Hayate, Nagi thinks that she still has Tsugumi to play with her – evidence of their improved relationship. However, Maria arrives with a ransom note. Mysteriously, it takes at least five seconds for Hayate and Nagi to realize the seriousness of this matter. 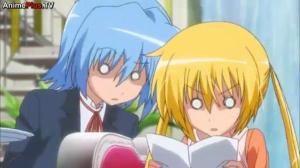 “We won the lottery!”

The thing is, It can be told easily by the spectacular handwriting that this letter has been written by Tsugumi herself. In other words, she could be staging her own kidnapping. However, they cannot write off the chance that she really has been kidnapped, because it is not sure how she manages to go to Las Vegas without money – do note that Hayate and co. do not know that Tsugumi asked for ticket fare from Shidou.

As Nagi cannot find Tsugumi at the Violet Mansion, she begins to accept that her “younger sister” could actually be in Las Vegas, kidnapped or not. Interestingly, Hayate then tries to persuade Nagi to go to Las Vegas as well. After all, deep down in her heart, Nagi wants to join “the others” in the US, and now she has her “younger sister” to worry about… 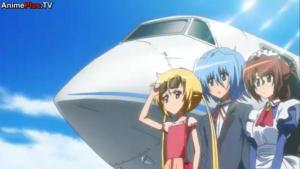 Apparently nothing is sacrificed after all.

So Nagi finally decides to go to Las Vegas, and she immediately demonstrates her financial power: private jet and private helicopter, I ask you. Amusement aside, it means that the Sanzen’in trio have taken considerably shorter time than ordinary people to arrive in the US. This will help explaining something later on.

As they get hold of the clock (?), Hayate suggests that he has heard about a sword that is also called “Kurotsubaki”. I am not sure if this implies that “Kurotsubaki” could be the name of a certain sword after all. Let us not forget that Hayate only heard about the name from Athena, just as we did. Therefore, it could well be that Hayate has had a (perhaps) false impression that Kurotsubaki is a sword, just like we do. 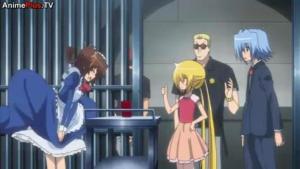 Hayate: “What a wonderful world…”

As she is not entirely sure the power of this… clock (?), Nagi needs to perform an experiment – that’s the scientific spirit, Nagi. A little surprisingly, she picks Maria instead of Hayate. But then, Hayate is already unlucky enough, so we might not be able to tell whether the bad luck is from the clock (?) or the person. In other words, we need a controlled experiment, so Maria is picked – that’s the scientific spirit, Nagi.

Of course, it would be more convenient to simply point out that Maria is simply picked for the fanservice. However, that is just too convenient to the point of being brainless, so let’s save it. And by the way, can somebody transcript the horrible English spoken by the supposedly American police officers?

Hayate volunteers to take hold of Kurotsubaki before the trade, which is set at 21:00 that day. It is nice for him to suggest that his work is to protect Nagi from all danger, but I find it awkward for Nagi to take up the offer so merrily. If Kurotsubaki is so dangerous, we might compare it to a ticking bomb, and imagine Nagi happily giving the bomb to Hayate… Then again, Nagi is infamous for not really caring about the safety of her employees, isn’t she? 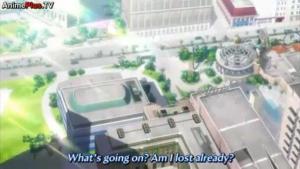 Isumi: “Welcome to our family, Hayate-sama…”

Bad things begin to happen soon, as Hayate almost gets run over by a bus as he crosses the road with Nagi and Maria. Of course we know that a car could not kill him, so that’s not the “bad thing”. The real deal is that he gets separated from the other two girls, and being a boy without money and telephone who cannot speak English, Hayate is completely lost.

So after all the education he has been receiving from a supposedly prestigious high school, Hayate doesn’t speak English…

Just as Hayate wanders along the streets, he has a surprise meeting with Ayumu. According to her, their plane needed an emergency landing in Las Vegas due to mechanical failures, where Ayumu and Hinagiku were more than happy to get off the plane. Poor Hinagiku must have been scared to death by the mechanical failures – indeed, she is “dead” in the shades. 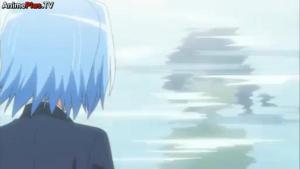 Ayumu: “At least I got a bath for free…”

It isn’t exactly pleasant to find Hayate connecting his meeting with Ayumu to the bad luck caused by Kurotsubaki. After all, Ayumu never intends to cause any harm or trouble for him, so what’s with this “bad luck” connection? But then something happens: a pipe in the nearby fountain falls off, and water splashes all over Ayumu. You have to wonder who is unlucky here.

Ayumu has a small fuzz getting into her eye, and given that there is no mirror around, nobody can blame her for asking Hayate to rid it from her eye. The two of them are then locked in a rather suggestive position, which to the naked eyes they are… kissing. Unfortunately for Hayate, the naked eyes include those of Nagi’s. Our main heroine goes into the routine “Nagi is jelly” mode, and hits Hayate hard on the head. 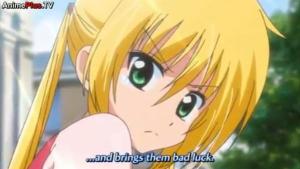 Bad luck in the form of a big jealous type.

In his pain and reflection, Hayate suddenly realizes something: Kurotsubaki can take away the good fortune of its possessor, and replaces it with bad luck. If Nagi is the “good fortune” gifted to Hayate, then Kurotsubaki could take her away, and replaces her with… what, Ayumu? That, of course, is not allowed to happen.

So, if Nagi really is taken away from him for some reason, Hayate would have to get through the “trial” of Kurotsubaki. In other words, he would have to get both hands on the clock (?) pointing at eight, which mechanically speaking is impossible – try that on your own clock, will you?

While the objective of the remaining episodes have become crystal clear, there are two little things that bug me. For one, as the “bad luck” here is related to girls (or at least a girl in the form of Ayumu – Hinagiku can be ignored as she is “dead” in the shades), I am not quite sure if the “bad luck” comes from the clock (?) or Hayate himself. For another, while a separation from Nagi is definitely bad luck for Hayate, the young mistress can actually be a little more helpful here by stop getting into “jelly mode” that easily. When jealousy becomes too much it ceases to be funny, but annoying.

20 comments on “Hayate no Gotoku! Can’t Take My Eyes off You Episode 8”