It really was quite a shocker at the end of the last chapter, and we are “forced” to wait for two weeks until we know what happens next. Not everyone is happy with the long wait, but what is gone is gone, and finally we are back with Ch. 383!

Basically, Ch. 383 consists of three separate mini-stories, of three different groups of people. To make this Chapter Review easier to read, let us go through these mini-stories one by one, instead of simply following the flow of the chapter.

Ayumu, Chiharu and Isumi – looking for the Rainbow Village

Isumi must be using Apple Map.

They are supposed to be hiking (?) with Hayate and Ruka, but as Chiharu tried to play match-maker in Ch. 381, the three of them have been looking for the “real” Rainbow Village. Unfortunately, Chiharu and Ayumu have made the fatal error to allow Isumi to lead the way, so after a long journey they arrive at… the Violet Mansion. It is actually a miracle that they manage to remain in Japan.

Chiharu finally realizes that they cannot rely on Isumi to lead the way any more, and calls Sakuya for help. As Isumi’s very best friend, Sakuya knows about the Rainbow Village, which turns out to be a hot spring. Nobody knows what the Saginomiyas have to do with the hot spring, but I am pretty sure that Isumi wasn’t born here. No, wait…

All along the journey we could see that Ayumu keeps demanding desperately to return to Hayate and Ruka as soon as possible, and we finally know why: she is worried that if Hayate and Ruka are left alone, it could be dangerous “in a physical way”. Whatever she means by that, I guess we can feel her frustration for not being able to do anything about the things she thinks are “dangerous”. Poor Hamster… 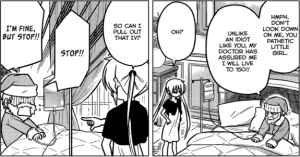 Mikado isn’t quite dead yet. At least he can still have a go at Nagi and then take a counterattack from her. Villains, or at least not very good people, generally tend to live longer, don’t they?

The inheritance, which Nagi has lost during the Athena saga, is finally mentioned again. It seems to have caused Mikado a lot of troubles, and I guess I could only say that he deserves it. If he hasn’t played all those mind games, challenging everyone to take the right of inheritance from Nagi, he wouldn’t have so many troubles to sort out, would he?

Hayate and Ruka – after the kiss

There are two things which make me feel sad for Ruka. 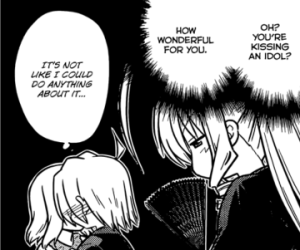 Yes, you can. Just push her away.

The first thing is that Hayate finds himself unable to enjoy Ruka’s kiss. Yes, he acknowledges that it tastes like honey, but then he thinks about Athena. For any reason, Hayate thinks that it is not entirely right to kiss other girls when Athena is still on his mind. He still cannot quite forget about Athena yet.

The second thing is that, while it is the first kiss for Ruka, it is definitely not for Hayate. His thought that it is his 582nd kiss is most probably an exaggeration – unless we believe that he and Athena had been kissing all day – but at least we know that it is not his first kiss anyway. Such is the difference in their perceptions of the kiss, that I feel bad for Ruka.

Ruka then does the spectacular move to confess to Hayate, and then something even more spectacular by coughing up blood. It seems that a confession comes with a lot of stress, and it is understandable. After all, we are all worried that we would be rejected.

As he watches Ruka sleeping, Hayate has time to reflect on Ruka’s confession. He doesn’t know Ruka would feel that way, and although he doesn’t hate Ruka, there seems to be something that makes him unable to accept her confession comfortably. It appears that Hayate has always treated Ruka like a friend, and he is not ready to accept a confession from someone he considers a friend.

This guy really is a disgrace…

A moment later, Ruka wakes up, and she demands an answer from him – this is very unlike Ayumu, who told Hayate that she did not require an answer, right? Hayate doesn’t want to accept, but for some reason he doesn’t want to answer her properly either. In the end he answers Ruka with the very (infamous) line he answered Ayumu: “I am only interested in 2D.” We can all recall that this approach earned him an Ayumu punch. By using the same method on another girl seven months after that punch, we can see that he has not learnt anything. This is pathetic.

Fortunately, Ruka is clever and calm enough not to take that crap, and demands a real answer from him. Hayate then answers that, as he is a butler and there is a girl (nobody knows why he doesn’t bother to say Nagi’s name), he has someone to protect so he cannot be the boyfriend of anyone. Ruka then surprises him with a question: “So it would be fine if you weren’t a butler?”

Still not giving up, huh?

Personally, I am curious as to what Ruka is playing at with that question. After all, it doesn’t seem like there is much she could do about it – she can’t ask her company to bail him out of his debt, right? Even if she could ask her company to “buy” Hayate from the Sanzen’in household, I don’t see it as the wisest move to get Hayate. His allegiance to Nagi has been tested in the Athena saga, the Heaven is a Place on Earth movie, and will be tested again in the Can’t Take My Eyes off You anime. He did not fail the first two, and he certainly will not fail the third. As such, I don’t see why he would fail now.

Then it begs the question as to why Hayate is given the same test in May (Athena saga), July (current arc), August (movie) and September (anime). If the outcome of the four “tests” would be exactly the same, then the whole story would become extremely boring – or tedious, at the very least.

In any case, Hayate really has been given a chance to rethink whether he could love any other girl following his break-up with Athena. Sadly, it appears that in a ship war like this, nobody is the winner, as Hayate says that he cannot be the boyfriend of anyone – “anyone” includes Nagi, right?

Such a development could lead to the – so we say – “butler end”, in which Hayate would remain Nagi’s butler for the rest of his (or her) life, without marrying her or any other girl. In other words, he would become Klaus No. 2. I am not sure if too many of us are happy with this, especially when Hayate’s love prospects never look too bad.

Whether he loves her romantically or not, Hayate considers Nagi his “life in itself”. Without his “life”, Hayate has no self. As such, if anyone is to hurt Nagi, Hayate will fight for her with his own life. In any case, it is most unwise to try to take Nagi away from Hayate, but as far as I am concerned, Ruka seems to be taking the “unwise” move…

Of course, nobody knows if she really is going to do something stupid, so let’s see how this arc would end!