It is July 20, and summer vacation surely has begun. We are in the green forest. The sky is blue and the stream murmurs. Ruka dips her leg in the stream and goes “Hoo…” as she is in awe of the beauty of nature. Then again she goes “Hoo…” as she is bored. She was born in Tokyo and is a “city person”, so she has absolutely no idea how to enjoy herself in the nature. Sounds like Nagi, doesn’t she?

So, a very relaxed, “Hoo…” and nice afternoon in the nature has suddenly become a torture. Ruka wonders why Hayate has put her through such a torture. And if our dear readers are finally waking up, we have something to wonder as well: weren’t we in the Violet Mansion at the end of the last chapter? Why are we in the forests at the beginning of this chapter? Are we missing something?

I guess you already know he is a huge troll?

Luckily, as Ruka moans, the narrator box invites a flashback, and we are (finally) back at where we stopped in the last chapter. As it is a flashback from the future, Ruka’s scene by the stream is a flashforward from now. Is it confusing? Maybe, maybe not.

Let us refresh our memory: in the last chapter, Hayate was on the phone with Atsumari while Ruka came into Hayate with her bucket list in her hand. Atsumari told Hayate that Ruka was indeed having a health problem, and it is finally revealed that she is suffering from gastritis from stress. In English, it means that whenever Ruka is under stress, her stomach misbehaves. Whenever her stomach misbehaves too much, she coughs up blood. So, in order to stop her from coughing up blood, Hayate must stop her stomach from misbehaving, and in turn Hayate must keep her from stress.

Hayate has a quick word with Ruka over her health. Ruka begins by saying that her health is fine, but a moment later she presses the self-destruct button and says that sometimes she coughs up blood. This is the worst case scenario according to Atsumari, so Hayate has to take action immediately by dragging Ruka to the hospital. A faceless doctor with the word “doctor” written all over his face tells Hayate that Ruka has to rest at a calm place, such as a beautiful forest stream and a murmuring stream.

So this is why Ruka is seen in a beautiful forest with a murmuring stream. One must wonder whether Hayate is taking the doctor’s words a little too literally.

Bragging to the wrong person.

Back at the Violet Mansion, Nagi is thrilled. The start of summer vacation is one thing, but more importantly, Nagi has some busy people to make fun of. Hinagiku leaves the Violet Mansion for a Kendo Team training camp (so the team still exists…) and Kayura is going back to Hokkaido to visit her family. According to Nagi, Hinagiku and Kayura are “busy” and she is not, so Nagi thinks she has some bragging rights.

From a certain point of view, it is funny that Hinagiku and Kayura happen to be the people who are leaving the Mansion. Hinagiku was (and probably is) the record holder for the least time staying at the Mansion, and now she goes completely missing for some days. Let’s not forget that Athena needs Hinagiku and Shirosakura to restore her power and memory, and imagine how frustrating it would be if your battery recharger, which only functions for… (checking) 11 hours a day is now completely unplugged for 3 days.

Meanwhile, by returning to her home at Hokkaido, Kayura proves that she is not homeless. As she has a perfectly fine home to go back to, one must wonder why Kayura stays at the Violet Mansion. Then again, she attends Hakuou which is in Tokyo, so renting a room in a nearby Mansion is a good choice. But if Hakuou is that far from home, why did she choose Hakuou in the first place? 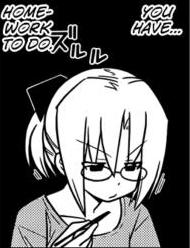 Say it out loud, will you?

As she is definitely not as busy as Hinagiku and Kayura, Nagi thinks that she has a more elegant holiday, during which she has nothing to do other than drawing manga. If it is true, then Nagi’s summer holiday would be truly wonderful, but Chiharu remains silent on the inconvenient truth that there is still homework to do (or enemy to slain).

The phone suddenly rings, and Maria picks it up. The call is from Klaus, who tells Maria and Nagi that Mikado has collapsed. The two girls would therefore have to pay him a visit, but Nagi gives Hayate the order to stay behind and look after Ruka. It somehow proves that, although their relationship is as frosty as Moscow in winter, grandpa and granddaughter remain family. If Nagi is to return to the Sanzen’in Mansion and her luxurious lifestyle, perhaps this visit would be key. But then, one must wonder whether Maria and Nagi have developed enough common sense to take public transport, or whether there would be a car (an ambulance?) to take them to the hospital…

One more thing: it is therefore clear that Nagi, Maria, Hinagiku and Kayura will not appear in the current arc. Maybe there will be separate (filler?) chapters of their adventures, but let’s see. There should be no problem with the two main heroines and Popularity No. 1, but Kayura…?

A.k.a. the Airhead Village.

Before they depart, Hayate asks for Nagi’s suggestion for a health faculty. Maria comes up with the idea of “that place” near Mikado’s house, which has a strong connection with Isumi’s family. In comes Isumi, the guardian of the Violet Mansion, to explain that the place in question is Rainbow Village, the birthplace of the Saginomiya family.

So, following Isumi’s lead (Is something wrong here? Well, whatever…) Hayate, Ruka, Chiharu and Ayumu arrive at a forest with a murmuring stream – bonus point goes to the small waterfall. The “villiage”, however, turns out to be a mountain cottage. Well, if you have 5 to 6 of these cottages, it is more valid to be called a village, but…

It is still a nice cottage, to be fair.

Hayate looks to Isumi for reassurance, but Isumi herself isn’t entirely sure either. She has the feeling that there is 1% chance that this is her birthplace. Now we see the funny side: how are we supposed to rely on someone with Isumi’s sense of direction to show us their birthplace? To be fair to her, though, Isumi is more reliable in locating spiritual forces, so this cottage could have been her birthplace after all – that is, assuming that there is spiritual forces in the Rainbow Village.

Ruka agrees with Chiharu that this is a nice place for her to relax, but then she adds that she wants to make “progress” here. By “progress” we know that she refers to her manga, but if she is to work hard, stress may build up and her health may worsen, and the whole point of coming into the forests is lost. Hayate, therefore, snatches Ruka’s storyboard and tells her that she has been working too hard. The sad truth is that Ruka has never had Christmas and New Year holidays, as she is busy either working or learning. People need holidays to release themselves from the stress of working, and Ruka never has had such luxury, so both her mental and physical health are crippled.

However, the interesting thing about hard-working people is that they never stop. They feel uneasy if they stop working, and they think that they are underachieving as such. Ruka further points out that she feels like the world would leave her behind. Hayate says that it would not be the case – at least, not when she is only taking one or two days off. 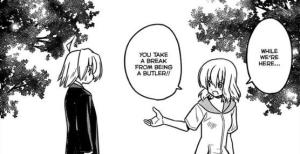 Then, Ruka thinks of something: Hayate has been working all his life as well, without a proper break (the Golden Week doesn’t count for a number of reasons). So, if Hayate wants her to rest, then Hayate has to rest as well. All of a sudden this has become a “you rest, I rest” scenario. As Nagi, his one and only mistress, is not under his care for a few days, there seems to be no harm to take up Ruka’s offer and enjoy a break with her…

The narrator box mischievously hints that this is a summer break for Hayate and Ruka only, but Chiharu makes her protest: Ayumu, Isumi and herself are still there. Now I am not sure if it is better not to make an appearance in this arc at all, or to make an appearance simply to be a pedestrian. Poor Ayumu hasn’t even got a line…

By the way, where is Athena?