Well said, but I have no rest tonight!

What a crazy month!

On May 15 there was the launching of Diablo III, an outstanding game which resulted in many sleepless nights. On June 8 EURO 2012 kicked off, and the few ones who choose to follow me on Twitter would know that I have been following the matches on a daily basis. The important point is that the games kick off at 3:00 am in my time zone, which means that I have been staying up late every night.

“Is there anything to do with Hayate Report?” you might ask. Well, most unfortunately, yes. You see, I usually write my reviews on Tuesday nights, so if I go to sleep early on Tuesday nights, I probably wouldn’t have time to do my homework. To compromise, I decided to write the review before the England vs Ukraine game. It is highly unlikely that I am not having any sleep tonight…

So, let’s get going, shall we? 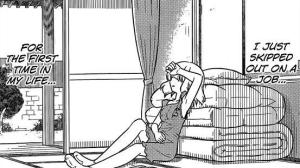 Now she knows she is in trouble…

The two previous chapters both focused on one of the new tenant, Ayumu. Now it is time to move to the other tenant, Ruka. It’s quite amusing that we come back to her so late, since she was, after all, earlier than Ayumu in deciding to rent a room.

Let us recall that Ruka ran away from home and her work because she was banned from drawing manga. It was a rash decision, and now that Ruka has some time to quietly rethink her life, she knows that she has got her career into trouble. We all know very well that any idol who does not appear on screen for too long would not be popular anymore. The problem with Ruka is that she cannot risk her popularity. If she has no popularity, she would have no job, and in turn no money to repay her debt to the company. Little does she know that her manager – I am quite sure she is called Atsumari – has predicted exactly this worst case scenario, and has rearranged Ruka’s schedule to reduce the loss.

She really needs to sell a lot to repay the debt!

Of course, if Ruka has other ways to make money, then it doesn’t matter if she couldn’t be an idol anymore. The only “other way” for Ruka is obviously manga, so she picks up her sketch pen and paper to begin drawing again. Then, there comes a voice which questions her ability to be a successful mangaka.

It is Kayura, whose parents were both manga apprentices who failed to have their dreams come true. Although they did not force their daughter to fulfill their lost dream, Kayura came to understand just how hard it is to become a successful mangaka. In fact, she thinks that it is more difficult than to become a popular idol.

Ruka is offended, and it is understandable. After all, she has put all the hours practicing singing and dancing, and she would know that becoming an idol is not easy. Kayura, however, is having none of this. She sees Ruka as someone not performing her own job, and as she doesn’t value her job she is not in a position to speak for it.

Not a happy meeting.

This is the first time Ruka and Kayura meet, and it didn’t go very well. There are quite a few things for us to consider.

The chances of picking anything valuable from this house are…?

Hayate sneaks into Ruka’s apartment in a very Mission: Impossible-ish fashion. We all know that he is a good boy who knows so many dirty tricks, but perhaps we have quite forgotten that should he chooses to be bad, he could easily become a crime overlord… Perhaps it is lucky for the world that Nagi picked him to be her butler, in the end.

Hayate is not alone in Ruka’s apartment, however, as Atsumari is also here to talk to him. She has done her homework and finds out Hayate’s name, his sex and his enthusiasm in crossdressing. “Well, you are not wrong.” – Tony Stark.

Atsumari comes as far as allowing Ruka to live at Hayate’s apartment, but for no longer than 2 weeks. As Hayate is the butler of the apartment, Atsumari wants him to look after Ruka. In other words, Hayate has been promoted – knock out “health” from his previous title of health manager. How about a pay rise? No way… 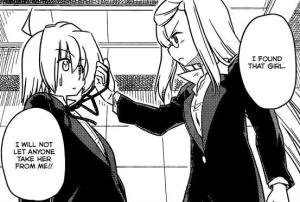 Her hand of control is grabbing Hayate!

Hayate does not argue with Atsumari about his workload or pay (Was he paid for taking caring of Ruka’s health, by the way?), but about her treatment of Ruka. He simply doesn’t understand why Ruka could not have her own dream even if she works for the company. Atsumari then reveals to him that Ruka owes a150M yen debt to the company, and Hayate becomes speechless. After all, he knows too well that when you have such a huge debt and someone bails you out, you have no choice but to give up your own dream and devote yourself to repay the debt…

This is the second relationship in the series which is built on a debt, and now we can see that these two relationships turn out to be very different. Nagi and Hayate began their lady-butler relationship with Nagi repaying Hayate’s debt. In the following six months they have developed a relationship of strong mutual trust which is no longer based on money: It is quite certain now that Hayate would not quit his job even if he could repay the debt to Nagi, and Nagi trusts Hayate so much as to allow him some freedom with other girls. Atsumari and Ruka began their employment relationship with the company repaying Ruka’s debt. Their relationship is, from what we have seen, strictly business-based. There is no care or mutual trust between the parties, so when things do not work out, Atsumari plays it hard on Ruka, and Ruka simply runs away.

Similar cases do not necessarily have similar developments, and we can’t help but ask: just what is the difference between Nagi-Hayate and Atsumari-Ruka? 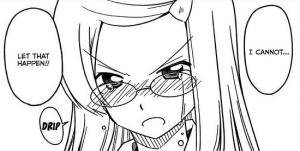 She really values Ruka, doesn’t she?

It isn’t that Atsumari doesn’t care about Ruka. She clearly values Ruka, and she breaks into tears as she declares that she would not allow anyone to take Ruka from her. Just what is it behind those tears? Is she jealous over Ruka’s own dream? Or does she care for Ruka so much?

On the last page of this chapter, Fr. Ghost looks as if he is coming very close to the answer – the mystery surrounding the Violet Mansion. His adventure is halted, though, and we can only wait for answers in the next chapter – that is, if the answer is in the next chapter. In any case, let’s look forward to that!