Good day! After a week with no chapter from Hata and no article from me, we are back with Ch. 361!

It is my third try on the so-called new style of writing, and I will make yet another change: Instead of panel reviews, this time I will try on page reviews. I have a gut feeling that it would become more or less similar to the “old” style, so I may be making fun of myself by going back to Square One. Well, if the “old” style really is better, I wouldn’t mind changing back. 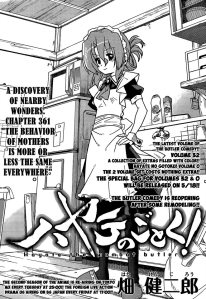 For one second I thought this is Movie!Maria.

Okay, before I move on with the chapter, I want to make it absolutely clear: I do not love all the (female) characters to the same degree, and while there is clearly a girl I love the most, there is also clearly a girl I love the least – Maria. My problem with her is that, there are simply too many things about her that I don’t know, and as such there is too much uncertainty about her.

Do I know her real birthday? She was found at the doorstep on December 24, and it is doubtful if she was born that day. What was her childhood life? We seem to know little to nothing about her pre-Hakuou life. Does she have a crush on Hayate? She clearly looked like she had a crush on him before, but recently we do not see any of her monologue about her love for Hayate. Is she one of the two main heroines? Well, by definition she is, but the thing is when long arcs come to the peak, we do not see her taking up a role which justifies her status.

As questions about her remain unanswered, I find myself seriously lack of understanding about this girl. I don’t know who she is, and I don’t know what she is thinking. She remains a mystery to me. To a certain extent she is quite similar to Lacus Clyne, incidentally also voiced by Tanaka Rei who reportedly had said she had no idea about what Lacus was thinking. If I don’t know much about a girl, it is very difficult for me to like her. Simple as that.

A Maria chapter always invite for more answers to Maria’s secrets. We know that she is interested in karaoke, bathing and gardening through these chapters. It should, therefore, be interesting to see what we can know more about Maria. Remember: If Maria becomes a bit more knowable, then she might be a bit more likable for me.

As this is a Maria chapter, Maria certainly is the main character. No question about it.

Nagi’s “grudge” on Maria is the reason why we have this chapter in the first place. Hayate is the combat stalker. Chiharu acts as a spectator once again.

Title page features Maria in her maid dress. She certainly looks like a mother… or does she?

She looks as if she wet her pants…

Page 2: Maria is angry with Nagi as the latter brought her laundry a bit too late. She also takes up this chance to lecture Nagi not to litter her room with dirty clothes. Judging by this page alone, you wouldn’t have believed that Nagi was a billionaire mistress a few months ago.

Page 3: Chiharu comments that Maria acts as if she is Nagi’s mother, and I think we must seriously consider if Maria is in any way linked to Yukariko. After all, Yukariko died more or less at the same time as Maria was first known to the world – i.e. entering Hakuou, didn’t she?

Page 4: Nagi clearly is not ready to treat Maria like her mother, for they are – assuming that Maria really is 17 – only four years apart. I guess she wouldn’t mind treating Maria like an older sister, though.

Page 5: Nagi decides she wants to take revenge on Maria by telling off her misbehaviours. The fearful but dirty work of spying on Maria is given to Hayate, who once again has no way to protest.

Page 6: Understandably Hayate is not happy with Nagi.

Page 7: If we want something about Maria to bear in mind, consider this: Since the end of the Athena saga, Maria is the only girl who is able to make Hayate blush without any sort of physical contact – Athena needed a hug and Ruka kissed him on the cheek. We all know that Hayate has had a crush on Maria for a long time, and it seems that his crush on her has become a bit stronger recently.

Well, normal girls do not put up a poker face at McD*nald’s.

Page 8: While it is quite normal for young girls to go to McD*nald’s, Hayate finds it “unusual” as Maria enters the restaurant. After all, Maria should have chosen something better that junk food.

Page 9: Hayate simply cannot accept the fact that Maria is using a Get A Shake Free certificate. I guess he expects Maria to buy red wine with real cash.

Page 10: Hayate fears that Maria would pick usable items from the junk yard, which is considered a typical behaviour of the elderly. It turns out that Maria simply found and rescued a trapped cat. Bonus point in front of a boy who crushes on her.

Who the hell goes into a clothing store with a basket?

Page 11: I guess my lack of understanding about Maria is justified. You see, Hayate has been living with her for over half a year, and he still have much he doesn’t know about her. Well, Hayate doesn’t have the mind or time to understand the girls around him other than Nagi, does he?

Page 12: So what if Maria’s maid uniform is hand-made? She has the skills and time to make her uniform, after all. Somehow I think that Hayate expects Maria’s lifestyle to be a lot more elegant.

Page 13: Maria looks a bit odd in this page, I would say. Hayate, on the other hand, is more ready for Maria’s “ordinary” behaviours.

Page 14: After fooling around for so long, Maria finally gets back to work. Nagi’s call comes at the right moment for Hayate to conclude on the things he knows about Maria…

Page 15: …which makes Nagi go mad. Of course, Hayate did not mean it, but his words are an insult to Nagi, no doubt about it. Nagi becomes more and more annoyed at Maria as her plan backfires.

Page 16: Maria makes Nagi happy again with the snack she just bought. One might wonder whether Maria has bought the snack for exactly this purpose. Once again Chiharu comments that Maria is like a mother, and this time Hayate agrees.

To conclude: Do we know more about Maria through this chapter? Well, yes and no. We know that she uses certificates to get free shakes at McD*nald’s, we know that she saves cats from the junk yard, and we know that she makes her own maid uniform. Trivial, trivial and trivial. In other words, I haven’t get to know something important about Maria, which could make me like her more.

Well, once again, I don’t know.