We are reading a butler comedy manga, and we are supposed to have some – or many – good laughs. To make us laugh, someone has to give us something to laugh at. Pulling pranks on other characters is one good way of giving us laughs, so no matter how good-natured the characters are, they have to make fun of each other from time to time, for the good of this series.

I intended to compile a list in one single article to have a look at some of the trolling moments – from the victims’ point of view – of the main cast, but the “article” turns out to be too long, so I have to cut “it” into several pieces. I have no idea yet how many pieces would there be, but most probably there would be 3 to 4.

Do note that outright evil acts and thoughts are not considered “trolling” in this project, so never ask why the likes of Mikado are not on this list, otherwise Doughnut Gunso would come and troll you. YOU HAVE BEEN WARNED…

So, this week we have Part 2: Ayumu, Miki, Risa, Izumi and Yukiji!

We do not know exactly why, but Ayumu played around with Hinagiku in Shimoda. She poked Hinagiku in the back and touched her hair – some “skinships” which Miki had not had until about 100 chapters later. After she saved Hinagiku from the hot spring, Ayumu just had to tell Hinagiku that she was “a bit turned on”, leaving Hinagiku all embarrassed.

When they were alone on the Ferris Wheel, Ayumu took her actions to a new height. She invited Hinagiku to sing a song together in order to calm her down, but did not sing along with her. She teased Hinagiku for following what she had been told, and for her choice of the song.

When Hinagiku went blushing furiously, and mumbled “That was unfair”, you know that she meant it. 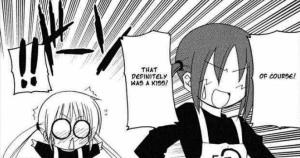 Even though they were more or less friendly love rivals, there was no lacking of hostility. The two girls often competed with each other verbally, like their competition could be settled through bickering.

One day when they were working together at Cafe Donguri, Ayumu picked on her “date” with Hayate in the amusement park to brag on. She told Nagi that it was a date, even though she admitted to herself that it didn’t really count, as Hayate obviously did not feel it that way. She told that she had kissed Hayate, while what actually happened was that they shared some cookies.

She said these things to Nagi with the intention to unsettle her, so although it was no big deal, it counts as trolling. 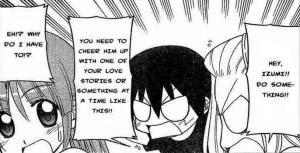 Miki had known Izumi since they were small children, and indeed they hanged around the school along with Risa all the time. It means that whatever Miki wanted to do with her friends – having laugh, throwing tantrums, and making fun – Izumi would be one of the primary targets.

Indeed, when Miki was bored and wanted to make fun of her friends, Izumi was her primary victim. Izumi, for her part, always reacted in funny ways when Miki made fool of her, which tempted Miki to play even more tricks on her. As such, trolling of Izumi is something which never ends, although there is no incident which really stands out.

Examples of these “not standing out” trolling include Miki telling Hayate to practice confessing to Izumi, Miki pressing on Izumi to reveal whether she had kissed Hayate, Miki ordering Izumi to tell a joke when Hayate was depressed, and Miki “accidentally” covering Izumi in ink.

It has a lot to do with Hayate, by the way…

On Miki’s personal profile page, it is stated that Miki liked Hinagiku, and that she liked to cause troubles for Hinagiku. The reason behind this is that Miki loved to see the usually cool Hinagiku in trouble. Well…

And we indeed have seen quite a few incidents of Miki actively causing troubles for Hinagiku. She gave Hinagiku her Valentine’s Day chocolate when Hinagiku was complaining that she had already received too much. She organized a huge birthday party for Hinagiku, despite – or because – the latter had clearly stated that she preferred a quiet birthday. She looked for “skinship” in the bathtub when Hinagiku was depressed after failing to confess to Hayate…

Hinagiku had once told Miki not to cause her any more troubles, and there was a reason for that. 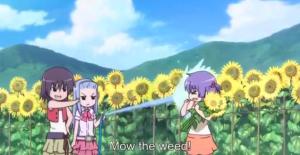 As mentioned above, Miki, Risa and Izumi had been hanging around all the time. It means that, well, either she joined Miki to troll Izumi, or she joined Izumi to be trolled by Miki. Obviously Risa had chosen the former, so Izumi became the sole victim of trolling.

Examine the interactions between these three girls, and we can see that Miki usually acted as the mastermind of the pranks they pulled on Izumi, while Risa was the motivator. They teamed up perfectly to give Izumi one nightmare after another. A most recent example can be found in the Heaven is a Place on Earth movie, in which Miki sprayed water onto Izumi, and Risa kept saying “Mow the weeds!”

Arguably, Miki-Risa had the best teamwork among all characters in this series, but teamwork like this is not entirely… admirable.

When Miki and Izumi were not toying Izumi, the three of them often made fun of Hayate. Obviously, they could not always pull pranks on Izumi.

While the three girls usually trolled Hayate together, Risa had been given a whole chapter in which she could troll Hayate all by herself. When Hayate went to Risa’s house to return a microphone, he was accused of theft. Risa refused to explain things for him so he was locked in a cave. She then told him that he would not be released unless he answered her a few questions, including whether he was “aiming for Hina’s body”…

Really, other trolling moments by the SC Rangers are nothing when compared to this incident.

It sounds ridiculous that someone could troll herself, but the fact is that this is exactly what Izumi had been doing throughout the series.

The first – and probably most spectacular – incident of her self-trolling was that she told Hayate and Yukiji that she was a masochist. This did not only had Hayate and Yukiji thoroughly shocked, but it had also caused a huge impact among the readers. Miki revealed in the First Character Poll that a lot of people voted for Izumi because she was (said to be) a masochist. Whether this is a good thing for Izumi is debatable.

Her other self-trolling incidents include half-admitting that she had given her first kiss to Hayate, and revealing to Hayate that she was a messy eater. While girls generally try their best to give a good image to others, Izumi did things the other way round and self-destruct.

Yukiji was right: Izumi had been weird all along. 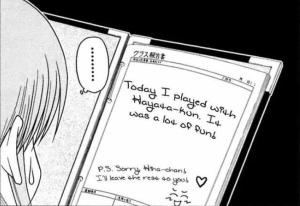 To be fair to Izumi, she was – from a certain point of view – more lovable than her two best friends, simply because she was not as mischievous as them, and she was to a large extent a good girl.

Surprisingly, her “good girl” image means that she was highly dependent on authoritative figures. No, dependent is different from obedient: an obedient person can be trusted by his or her boss, while a dependent person cannot. On the contrary, he or she would cause troubles for the boss. You could say that, in such cases, the subordinate is trolling the boss.

As we can see early in the series, Izumi – along with Miki and Risa – depended on Hinagiku. She did not really have to worry about the standards of her work, as she knew that Hinagiku would fix the mess for her. As such, there came the diary-like class report for Hinagiku to fill in for her, when Hinagiku wasn’t even in the same class as Izumi’s.

Izumi’s dependence on Hinagiku did not restrict to Student Council duties. When Izumi saw Hayate having bad meals (instant noodles), she offered to make him dinner, and then threw the whole ball to Hinagiku, who protested accordingly. Izumi genuinely believed that Hinagiku would fix everything for her, and she “invited” Hinagiku to do so.

Everything happens for a reason. You might find Hayate not giving enough respect to Yukiji, his class teacher, but there is a reason for it: Yukiji had been trolling Hayate all along. For some reason, Yukiji found Hayate an extremely good “toy”, and she had been trolling him since the first time they met.

She spoiled Nagi’s lunchbox which Hayate was supposed to give her. She caused Hayate all sorts of troubles during his entrance exam, with the result that Hayate failed the test by 1 mark. She had been an unpleasant sight when she came with her financial problems. She told Hayate to tutor the SC Rangers…

Hayate had every reason not to like Yukiji and to stay out of her way whenever possible. Perhaps it was much more difficult than we thought for him to ask for Yukiji’s advice on how to persuade Hinagiku to live with him. 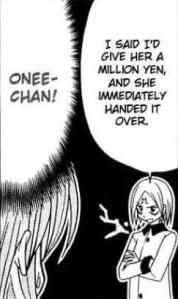 Everything happens for a reason. You might find Hinagiku not giving enough respect to Yukiji, her elder sister, but there is a reason for it: Yukiji had been trolling Hinagiku all along. For some reason, Yukiji treated Hinagiku more like a bank than her sister, and she had been borrowing money from Hinagiku before we met them in the series.

And money wasn’t the only problem Yukiji had caused Hinagiku. While Hinagiku was a famous school idol, Yukiji was an infamous drunken teacher at Hakuou. If Hinagiku was someone who aimed at building up high reputations for herself, then Yukiji would be someone she never wanted to be related to.

In this case, it might be kind of sweet that Hinagiku called Yukiji “Onee-chan” loudly in public. One thing is for certain: no matter how much trouble Yukiji had caused her, Hinagiku did not deny that she was her sister.