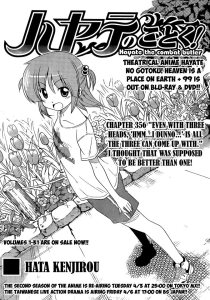 Three idiots don't add up to be a genius.

As April Fool’s Day approaches, it is time to see some of the fools in this series again!

When we talk about “the fools”, we easily think about Izumi, Miki and Risa. These three, collectively, had quite a few nicknames: the SC Trio, the SC Rangers, the Three SC Girls, and – arguably most commonly – the Three Idiots.

Thou shalt not mention test grades.

Well, it is not exactly nice to call people “idiots”, but it is not exactly easy to defend them either. They did not study well – despite your protest, the first and most common way to judge the intelligence of a person is to look at his or her academic performance. They were not performing in extra-curricular activities – Miki seemed to be the only one who was helpful with the Student Council, and we all wonder what the three had been doing in their Video Research Club. They were not helpful in problem-solving either – the recent Heaven is a Place on Earth movie would be the best example.

So, Izumi, Miki and Risa were indeed three idiots. The question is: Who was the most foolish one? And who was the smartest one, by the way? This is not only a question for us, but also for Risa. Apparently, she had recently heard that she was called “Three Idiots” along with Izumi and Miki. What concerned her was not that she was lumped with the other two – proof that they were really good friends – but that she did not want to be considered as stupid as the other two. “After all, I’m smarter than those two idiots!”

As she could finish Hayate’s milk effortlessly (Okay, I know that she had to make use of one or two drops of tear as well), you might have to agree with her.

How should we comment on the individual intelligence of these three idiots, anyway? Granted, they all had their own moments of unbearable stupidity. Miki and Risa frequently argued over the most trivial things, and as they could hardly settle any argument, it seems that they had the same level of intelligence. Izumi didn’t get herself in such arguments that often, but she showed her own stupidity by self-destruct (Or, to play on the pun, Izumi frequently made a fool of herself…), such as telling people that she was a masochist or a messy eater. So yes, these three idiots were stupid individually.

But then again, what Risa really wanted to prove was that she was at least smarter than Izumi and Miki. As such, we need to compare their intelligence, but the examples above are not definitively helpful. The problem is that Izumi was not in the “trivial arguments” example, while Miki and Risa were not in the “self-destruct” example. We need a case in which all the three of them responded individually to the same thing, be it a problem-solving quest, an intelligence competition, or… whatever.

It sounded like a fair competition for them, as they were all members of the Video Research Club, so they would all know how to make video clips. It sounded like a legitimate competition, but one thing concerns me: Sometimes, people just like watching stupid videos and having a laugh, so there is a good chance that the most popular video was the most stupid one. If that is the case, the whole point of the competition would be lost. Oh well…

A contest being a contest means there would be prize and punishment. The prize for the winner (i.e. the smartest one) was to order the loser (i.e. the most stupid one) to do one thing along with Hayate. It means that, whoever lost, Hayate would be punished. While Hayate could make no complaint to being “destined for punishment”, he decided to watch each of the three girls making their videos. He might not be interested in the videos, but perhaps he wanted to know whose video gave him his punishment.

We began with Izumi, who had been growing a small plant. She revealed that she had been taking frames of it for a while, and she would play all the frames together to see its growth. I have seen a few plant-growth videos in Discovery Channel programmes, and I must say they are a joy to watch. If Izumi could make her own clip, then not only we must appreciate her efforts, but it would definitely attract a lot of views.

Hayate, however, made a fair point: the plant was still too small, so there was not much to watch – both the plant and the video. Izumi hoped that she could speed up the plant growth a bit, but she took the worst possible action: pulling the plant up. As we would have expected, she pulled too hard and snapped the plant into two pieces. The plant was probably dead, and Izumi’s video clip was definitely dead.

Miki then came and claimed that Izumi had no idea of how to make an interesting video. According to her, the key to an interesting video was not plants, but cute animals. Her video, as such, would be about chicks hatching. You know, chicks are adorable and chick hatching is a joy to watch, so if Miki could make a video about this, it would attract lots of views as well.

Miki further revealed that she had been heating some eggs for 3 weeks – the hatching cycle of chicks, and it was about time for the small lifeforms to come out of the egg. Oh, one more thing: she bought the eggs from a supermarket. Oh no…

As Hayate pointed out, supermarket eggs are unfertilized. These are eggs laid without chicken mating, so no chicks would be born from such eggs, no matter how carefully you heat them. Well, this has little to do with your intelligence, as it was more like common sense. A lack of common sense, however, makes you look stupid. 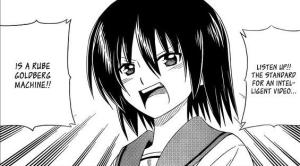 Seriously, I have never heard about it before.

Finally, we came to Risa, who decided to make a Rube Goldberg machine. For those who do not bother going to check what the heck is a Rube Goldberg machine on Wikipedia, here is the definition: “a deliberately over-engineered or overdone machine that performs a very simple task in a very complex fashion, usually including a chain reaction”. In English: a complicated machine which does simple jobs in complicated ways. A rather extreme example would be to deliver a milk-cow by Turn-A Gundam.

Obviously Risa could not make a Dark History Gundam, but she managed to make a Rube Goldberg machine which could release balloons for her. Surely, if her machine worked, then surely it would attract a lot of views. But then…

Perhaps it was her finger pressing the switch too hard. Perhaps it was mechanical failure. Perhaps… whatever. In any case, the balloons began flying into the air on their own. Risa wasn’t even ready to record it as a video. Her machine had failed her, but she accepted the failure and didn’t try to fix her machine – somehow I think it would not be that difficult, really.

"But fear not. I am more stupid than you!"

This conclusion was not at all pleasing to the Three Idiots, and from what I could read from the last two panels, he was punished by all the three of them. Well, there is a price to pay for being blunt, after all…

So, that is the “official” answer: Izumi, Risa and Miki were equally stupid. I would, however, love to have your own opinion on this matter. As such… please vote!