The movie is too long to be summarized in one post, so I will split this article into 4 parts, each part covering about 15 minutes of the 1-hour movie. Please visit other articles to see the rest of the movie content! 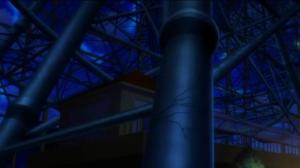 Nagi’s scream cracked the “closed space” and broke the woman’s enchantment (Do notice that the bell at her chest had gone…), so the amusement park began to collapse. Robots came out of nowhere chasing Miki and Kayura. On the Ferris Wheel, the woman couldn’t believe what was happening, and as things began to go out of her control, she told Nagi that she did not have the power to save her.

She actually blushed at the woman.

Nagi realized that, as the woman thought of saving her, she really did not want to harm her. After all, if she had wanted to harm Nagi, there were a lot of chances. Moreover, according to Nagi, bad people could not build such an interesting amusement park – I am quite reserved on this one. The woman was impressed that Nagi could remain calm and rational under the situation, and she knew that it was because Nagi trusted Hayate so much: just as she had already said, whenever she was in danger, Hayate would definitely come and save her. 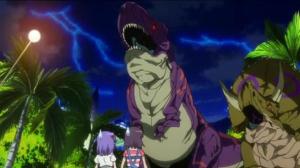 What's the name of this park again? Jurassic Park?

However, Nagi was not the only one in danger. The dinosaur statues in the park suddenly came into life, and chased after Izumi and Risa. Just as they were surrounded, Isumi arrived and took the dinosaurs out with one move. 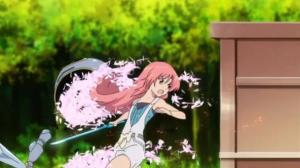 Meanwhile, Miki and Kayura were hiding themselves from the robots, but finally the robots found her. As Kayura’s Excalibur was made from paper boxes, it could do nothing against the solid robots. Soon Miki fell down, and the robots were about to deliver their blow. Hina arrived in time, summoned the Shirosakura and defeated all the robots. Kayura was so in awe of her powers that she called her “Invincible Senior”. Hina then asked where Nagi was – proof that her memories of Nagi were also restored. Kayura pointed to the Ferris Wheel, while a roller-coaster train was also approaching it. 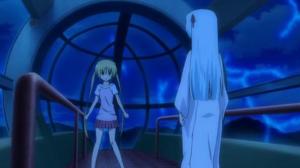 These two were talking while the world shook like mad...

The woman explained that she really wanted to set Hayate free from the debt which was given to him by her son  so she was the mother of Hayate’s father, and thus the grandmother of Hayate. She thought that the debt gave Hayate all the sufferings and burdens, so if his debt was repaid, he could be freed of everything, including his obligation to save Nagi. “Would Hayate still come to save you, if it is not necessary any more?” she asked.

Hayate, riding on the incoming roller-coaster train, answered that he would, because he was Nagi’s butler. Just as he arrived, the “closed space” was completely destroyed, and he finally reunited with Nagi.

Hayate returned the diamond to his grandmother, explaining that he would want to repay his debt to Nagi with his own hands. He understood that he was not free, and agreed that the debt brought him sufferings, but he was also saved everyday while he was in debt. Upon hearing her grandson’s answer, the woman turned into light, and disappeared. Hayate took hold of Nagi, and left the Ferris Wheel.

His grandmother was so young in his memories...

When they all woke up in the morning, they saw only old ruins of an amusement park. Hayate explained that this had never been a successful park, with only very few guests, and was closed down soon enough. Hina asked if he had been here before, and Hayate replied that he had been here once, when he was very small, with a certain woman in a kimono. It was his last thought of his grandmother. 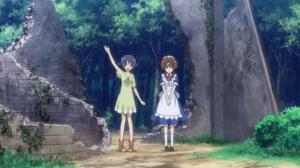 "We have been standing by at the amusement park entrance all along..."

Maria and Ayumu found them, and asked what they had been doing here, gathering so early in the morning. Yet, nobody could really explain or recall what really had happened. To all of them, it was just like a dream. Now that they had woken up from the dream, it was time for breakfast. 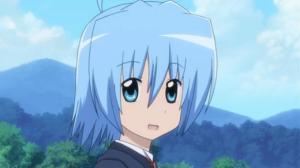 At least he is happy, right, grandma?

Maria approached Hayate, and told him that she also had a dream, but she wasn’t willing to go into details, as that dream seemed to be quite… embarrassing. Nagi stated that she did not hate Hayate’s grandmother for what she had done, and Hayate was glad about it. Just as everyone returned to the farmhouse, Hayate had a final look at the ruins. “Thank you very much, but I am fine,” he said. 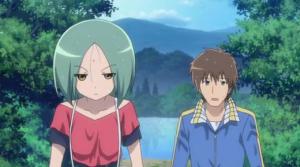 Kaoru: "I think we should dry ourselves first..."

After the ED (“Heaven is a Place on Earth”, performed by fripside), we come back to the lake where Yukiji and Kaoru had sunk into. They had managed to come out of the lake, and Yukiji planned on pulling out Kaoru’s car later. When Kaoru exclaimed his disbelief, Yukiji apologized and gave him something as compensation.

It was the diamond, and Yukiji found it at the bottom of the lake. She told him to sell it, so he could get his money for a new car. However, Kaoru disagreed. “How could I sell something you give to me?” he said. Yukiji made no comment, and just asked him – again – to go treasure-hunting, although they didn’t know where they were. 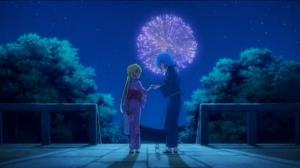 All the girls plus Hayate got themselves ready to join the Summer Festival. At the end, they all went to the temple to make their wish – or, to send out their thoughts. Only one person would have his or her thoughts sent, and Isumi said that it had already been sent. Nagi was having candy, but she got her hand dirty again. As Hayate was wiping her hand, she said “thank you” very quietly. Fireworks were shot into the sky, giving the Summer Festival – and the movie – a beautiful ending.

4 comments on “Hayate no Gotoku! Heaven is a Place on Earth – Part 4”