Maria was not happy!

The June 12 Comisun had come to an end, and Hata said on his BS that there would again be some one-chapter stories. And here we go!

From the last panel in the last chapter, we understood that Maria managed to sell all 1000 copies of her photo book on her own. Of course, it shows that Maria indeed was “an excellent person”, to quote Hayate. Her “sacrifice” allowed Nagi to cut down her losses – if Maria sold her photo books at 300 yen per book she could actually have earned Nagi a small fortune.

I don't think it is the sort of cover photo you could take without the person noticing.

Yet, Maria was not happy about it. The photo books were embarrassing enough, and Nagi made her to help with the sale. What’s worse, one hour into the sale, and Chiharu, Nagi and Hayate all left the venue, leaving Maria alone to sell her own photo books. The worst of all was that Hayate finally returned, but only to tell her to “take care of the rest”. He might have thought that everything would be fine, but for Maria everything was not fine. She thought that Hayate and the others were being irresponsible, and she was understandably angry.

As revenge – or response – Maria decided to go on strike. She told Hayate that, for the moment, she had had too much with her maid uniform. She might be tired, but more importantly she was sulking, and clearly was not in the mood of serving anyone.

You hurt girls' feelings for the n-th time!

Only then, Hayate realized that he had made a serious mistake. Hayate thought that Maria would be fine selling her own photo books, even after she protested about the embarrassment. It shows that he did not care about her feelings and dignity, so this incident became the most recent example of Hayate’s lack of delicacy. A few months ago I suggested that maybe Hayate had started to show delicacy to Maria, and now… “Well, people only grow a bit at a time,” said Chiharu.

As always, Hayate began to make apologies, but it was too late. Maria was already angry at him (or them), and she was determined to go on strike. 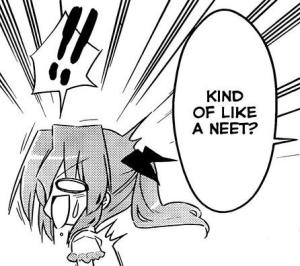 Nagi entered the scene (She might have waken up incredibly early…), but she didn’t offer any help to Hayate. Instead, she commented that Maria would be “kind of like a NEET”, if she kept hanging around in the house for the whole time. Given that Maria did not go to school, if she did not perform her maid duty she would have nothing to do at home. This is typically a NEET: not in education, employment, or training. So, cruel it might be, but what Nagi said was true.

However, the truth only hurt Maria’s feelings even more. She had already lost dignity as a girl, and Nagi’s words made her lost dignity as a person. As a result, she was sulking even more, and was even more determined to go on strike. To her, it was unforgivable for Hayate and Nagi to hurt her dignity, as everybody relied on her, the oldest girl in the apartment, too much. It was time for everybody to learn a lesson: they couldn’t even live without her doing the housework.

Both cry-babies had "NAGI" in their name.

Maria might complain about Nagi calling her a NEET, but the fact remained that she did nothing in the Mansion. She kept sleeping on and on, for two pages and half a day. Yet, she was “an excellent person”, to quote Hayate, and “an excellent person” could hardly be a NEET. At 15:02 she decided that she could not stand the NEET lifestyle and wanted to go back to work. But then, her dignity as an older had not been restored, and she did not want to give in.

Then she had an idea. It was Monday and Hayate had to do his part-time job, and he would not return – as we were told in Ch. 303 – until 19:30. It would be far too late for him to start making dinner, and everyone would be starving. So, what if the cry-babies came and begged her for dinner? Yes, they would understand just how important Maria was to the Mansion, and her dignity would be restored! Perfect!

Alice's training: Help with housework when the maid goes on strike.

Not so. Hayate returned home at 19:40 and started preparing dinner. He revealed that he had already thought about the dinner matter, so he decided to make curry. As he only had to add vegetables into packed curry, dinner would be ready very soon – far too soon for anyone to start crying for food.

So, Maria had already lost her first battle. Did she have any grounds to strike back? Yes, indeed there were. Housework including cleaning, laundry and shopping were all handled by Maria, so if she went on strike, then nobody would be doing them. However, she found that these tasks were already done by Hina, Alice and Chiharu respectively. Surely, Hayate had already asked them to help with the housework.

Well, Maria might not know that Chiharu had gone shopping, but Hina and Alice were clearly doing their tasks in or around the Mansion, so why had Maria not noticed…?

Maria was shocked. She thought that, by going on strike, everyone would know her importance. However, as it turned out, life did not become very bad even if she did not work. So, what was her importance? How was she supposed to return to work now, when everyone did not think it was a matter?

Maria was upset at dinner, while Nagi suddenly complained about the curry. Basically, as Hayate made the curry in such a rush, the depth of the curry – which would not exist unless you took more time making it – was lost. Nagi preferred Maria’s curry, and one of the reasons is that Maria could spend more time preparing the food.

The funny thing is that, just one page ago, Hina thanked Hayate for the food, and she said the curry to be “good”. Surely, Hina did not care about the taste of the food as much as Nagi did. Or, maybe she was simply satisfied with whatever food Hayate made her?

Nagi apologized for sacrificing Maria the previous day, and asked if she could remake some curry for her. Maria was happy that Nagi valued her food, and got back to work in an instant. The thing is, while it takes time to make curry with depth, when the food was finally ready, surely it would be very late…

Nagi did have a harsh taste, and it would take much more than “fast food” dinner to satisfy her. Maria remained very important to this Mansion, and especially to Nagi.