The June 12 Comisun concluded the first half (or part, if there would be more than 2 parts) of Nagi’s Mangaka saga. It has been very eventful, and as we sit down and review the story so far, we would find we had learnt a lot of things about the story and the characters. Yours truly would now sum up a few for you, and hope that it could stimulate further discussions.

1. Nagi never knew how bad her manga was 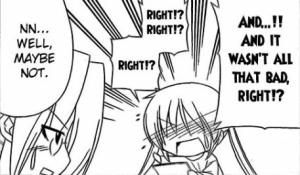 Certainly, Nagi always thought that her manga was good. At least twice in the saga she had called her manga a “masterpiece”, which could sell trillions of copies. To her, the only reason that people couldn’t appreciate her manga was that they did not understand how good it was. To her, there was nothing – absolutely nothing – wrong with her manga.

Her visit to Ashibashi-sensei’s studio did have a certain impact on her. Upon reading the manuscript of the greatest mangaka on Earth, Nagi realized that her manga were merely scribbles. In other words, she finally admitted that her manga wasn’t good enough. She lost her passion, as well as her self-confidence.

Watching Ruka’s concert allowed her to regain not only her passion, but also her self-confidence. In her meeting with Chiharu and Ayumu, she insisted that she was heading in the right direction, and she only needed to revise and redraw her original manga. As you all know, this is simply not enough, and it shows that Nagi did not really understand the difference between her and Ashibashi-sensei. She ceased to work hard on her manga, and focused most of her time advertising her manga.

Hopefully, her experience in the June 12 Comisun could finally get her to understand the obvious truth: People didn’t like her manga, because it was just so bad.

2. Ruka was an extremely talented mangaka

She got the answers in an instant.

Benefited from Hina’s advices, Ruka had a very successful Comisun. She sold all 30 copies, and earned the appreciation of her readers. As a result, Hina also earned herself the reputation of a “High Spec Adviser”.

However, Hina didn’t go as far as to turn charcoal into diamond. The main reason for the Hina-Ruka partnership to succeed is that Ruka herself was diamond, albeit a raw one. In other words, Ruka was a highly talented mangaka, although she lacked correct guidance and experience.

With Ruka’s raw talents, Hina did not have to do much to bring out the better side of her. She left all the story-thinking to Ruka, and simply gave her instructions to make her doujinshi more presentable. Ruka had the talents to make “quite good” doujinshis, and Hina’s job was to allow more people to understand how good Ruka was. Thanks to Hina’s crafting, the raw Ruka began to shine.

Nagi should not take her defeat against Ruka too badly. She did not lose to a nobody. She lost to a very talented mangaka.

3. Chiharu and Ayumu did not work well as partners

There was no team work.

The clash between Ruka and Nagi was not that of two individuals, but two sides. Nagi had Chiharu and Ayumu with her, while Ruka had Hayate and Hina. If we suggest that Nagi and Ruka were of similar abilities and potential, the performance of their teams would greatly affect the outcome of the clash.

On Ruka’s side, the distribution of work between Hayate and Hina was incredibly simple but effective. Hayate took care of Ruka’s health, while Hina acted as the mastermind behind Ruka’s drawing and marketing methodology. They both did nothing to interfere the other’s effort although some questions were asked, and as such both could offer their best support to Ruka. The results were clear for us to see.

Things were a bit more complicated on Nagi’s side. Chiharu was the one with the knowledge related to doujinshis and conventions, yet she remained silent most of the time, allowing Nagi to do whatever she wanted to. Ayumu, on the other hand, was very outspoken, offering her ideas from time to time, while she knew almost nothing about manga at all!

The combined effort of Chiharu and Ayumu was almost disastrous. Ayumu suggested Nagi to remake her original manuscript, while adding some cute things such as H*ll* K*tt*. She also provoked Nagi into making 1000 copy-bons, of which not even 1% would be sold if Nagi had not decided to throw Maria into her marketing strategy. As Nagi got carried further and further away, Chiharu simply stood there, in almost absolute silence. She foresaw troubles coming, but she did almost nothing to stop them.

4. Hinagiku showed once again she is not to be underestimated

One of, if not the best, performers.

It has long been argued that Hinagiku remains the most popular character because she keeps stealing the spotlight. They say that, as merely a supporting character, she appears far too often but offered too little support to the plot. Therefore, in order to look for a downfall in Hina’s popularity, the critics try very hard looking for signs that Hina’s importance is reducing, and that her status is diminishing. I might come back to the “popularity hypocrisy” later, but for now let us focus on the Mangaka saga.

In fact, the Mangaka saga could have been what Hina haters had been looking for. Since Hina did not understand about manga, she was not going to be helpful to Nagi or Ruka in any sense, so it was quite possible that Hina would not make much appearances other than filler chapters and teasers – both would have destroyed her status.

It turned out that, instead of the predicted downfall, Hina shone in the Mangaka saga so far. She overcame her major weakness by starting to read and study manga, and in a few days she became the best manga advisor in the saga so far. She developed a good friendship with Ruka, one of the main heriones in this saga, and for a brief moment forgot almost everything about Hayate. As Hayate was out of her way, Hina showed comfortably her true self: hard-working, caring, and smart. Thanks to her, Ruka became a much better mangaka, and a truly worthy opponent for Nagi – you just don’t compete with someone who sucks.

Given that Nagi is bound to win at the end of the Mangaka saga, a sound defeat for Ruka and Hina would have to be expected. For now, allow me to toast to Hina for her strong performance in the saga so far.

5. The Nagi-Ruka rivalry was one-sided

In every sense, Ruka had the high ground.

Since the beginning of the Mangaka saga, Nagi and Ruka had been set up as rivals. At the very beginning, Chiharu had already suggested that Ruka could become Nagi’s rival, instead of her friend or partner. Ruka said that Nagi could become her competitior. Nagi tried to beat Ruka in order to be as special as her.

The rivalry lied in the nature of the Doujinshi business, you might say. They both dreamt to become mangakas, and both had their own ideas which they wanted to put on papers for readers to read. It means that both of them would want to take the leading role in manga making, which also means that neither could work under the other. Two people who enter the same business for money and career would automatically become rivals. Both Nagi and Ruka understood this, so they had never been any friendlier than being friendly rivals.

Yet, Nagi and Ruka had quite different attitudes toward their rival. Nagi was trying all she could to gain the upper hand in their battle. She was fully aware of how special Ruka was, and she was determined to beat her on sales figures. As such, she put much effort into marketing her doujinshi, making sure that she would sell more than Ruka. Ruka, on the other hand, didn’t seem quite eager to crush Nagi. Of course, she paid attention to Nagi. She wanted to make copy-bons too, after hearing that Nagi would be making. She became anxious when she saw that Nagi’s manga was selling quickly. However, other than these two brief moments, she didn’t really pay much attention to Nagi. She worried about her own manga more than the performance of the others, so she called Hayate, asking for his opinion on her manga. Indeed, while Nagi displayed her eagerness to beat Ruka, Ruka looked more concerned on doing her own job. Their rivalry was, therefore, rather one-sided.

The outcome of the June 12 Comisun could have made this one-sided rivalry even more one-sided. As Ruka had already won, she would pay much more attention on making another good manga, or even looking for ways to become more popular among fans, rather than looking back at her defeated opponent. On the other hand, Nagi had lost, so she would be even more determined to beat Ruka next time. If Nagi only wanted to defeat Ruka in the June 12 Comisun, she would want to bite her head off during the Summer Comiket – presumably their next battle.

Unless Hata would give Ruka some more motivation, she would not really think of beating Nagi that much. While one party does not devote herself in the battle, it is not going to be very heated in any way.