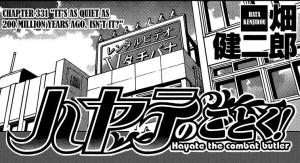 Fine! This is the cover!

Finally we have 16 pages in this chapter!

It might still be a little too early to breath our sigh of relief, for we have no idea how many pages would be there in the next chapter. Still, a return to 16 pages in this chapter is still a good sign. It is quite similar to witnessing a striker finally scoring a goal after a long goal drought: we congradulate him, even if he is going to suffer another long goal drought.

A few weeks ago Hata suggested on Twitter that he was planning for a break after the movie is out. If Hata was serious with his words, then it is not a “goal drought”, but a “season break”, we are talking about.

Of course, there is no official announcement yet. “Don’t count your eggs before they are hatched”, they say, so let’s not talk about Hata’s break for now, as he is definitely still working.

I find it amazing that he could say this out loud so easily.

After having a crush on Isumi for 10 years, Wataru finally decided to confess to her – before (maybe) leaving her forever. He asked Sakuya to give a piece of paper to Isumi, telling her to meet him at a certain place at a certain time. We all know exactly where this is leading: Wataru would confess to Isumi at there and then.

All girls close to him came to the knowledge of this piece of news quick enough, and they reacted differently. Ayumu told Wataru off right in his face, and agreed to his bet; whether it was her intention or not, she provoked Wataru and made him more determined to confess to Isumi. Nagi and Sakuya were very excited about this development, but they also teased Wataru’s approach as “a little too tactless”. Saki took the whole thing very seriously, and was worried that Isumi might accept Wataru’s confession.

They say that denial is a kind of self-defense mechanism.

As for Isumi herself, she remained calm, and was confident that Wataru did not love her, and that whatever he might say, it certainly would not be “I love you”. She made a bet with Nagi and Sakuya as well, which was… a lot less practical than the bet between Wataru and Ayumu.

If there is anyone who could boil water on his belly button, please show me.

Asking Isumi to go to a certain place without getting lost was almost impossible, and her best friends showed that they were very, very worried. Sakuya voiced out her doubt as soon as she could, but Isumi was too quick for her to stop. Nagi sent Hayate to go after Isumi, and to a certain extent this might be the best solution she could offer. 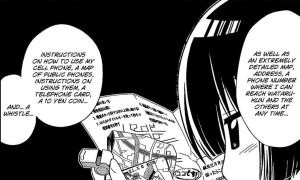 Wataru himself knew that he might be asking quite a lot from Isumi. As he wanted Isumi to come alone, he did not ask Sakuya or Nagi to escort her, instead he prepared a few items for her:

Hayate: "You stole my line, Isumi-san!"

As we can see, Wataru was so thoughtful for Isumi, and he tried his very best to eliminate all the possibilities which might make Isumi get lost. He even prepared at least three ways for her to get help in case she did get lost. You couldn’t say your love for someone is deep enough if you don’t understand the weaknesses of him or her, and do whatever you can to help him or her overcome these weaknesses and difficulties. At least, Wataru’s love was enough for Isumi.

Isumi did not appreciate Wataru’s efforts, and thought to herself that Wataru worried too much – in Hayate’s very same words on Hina. This was of course because – just like Hayate – she was so confident that she would be absolutely fine. To Isumi, the more Wataru did for her, the less he trusted her. Let’s not forget that Isumi was quite proud of herself, and it was such pride which made her stubborn. Wataru’s efforts hurt her pride, and she was not happy about it.

Well, just like Hayate, at least Isumi recognized that Wataru worried for her.

Isumi had her fair share of bad luck as well.

Unlike Hayate, though, Isumi proved soon enough that she was not fine. A bird came by and took away the maps from her. As almost all Wataru’s help was put – literally – on paper, Isumi was in serious trouble. Did she even manage to memorize the address of the destination?

At 18:00, Wataru already arrived at the meeting place – the park. For some reason, early arrival is always a demonstration of determination. Not far away, Nagi and Sakuya hid themselves in the bushes. They certainly were watching Wataru’s show, even though they were worried that the main heroine might not even turn up.

This is not a WEAPON, Isumi!

Meanwhile, Isumi was still struggling with her quest to reach the park. Without all the maps and instructions, she still managed to think of one – and for her this might be the only one – solution: to call someone for help. The question is: Did she really know whom she should call?

This time, she was able to her cellphone, thanks to a night’s worth of tutorial from Sakuya. However, she made another serious mistake: she had forgotten to recharge her cellphone, so it ran out of battery! Now, Isumi was in even deeper trouble… 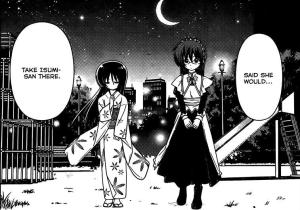 It was almost 12 o’clock in the midnight, and Wataru was still waiting for Isumi. Sakuya was still watching Wataru, but Nagi had already returned home to draw her doujinshi. She did not think there was anything to worry about, because she believed that he would finally catch up with her, and take her to the park. It was therefore not surprising that Nagi was surprised to see Hayate returning home before finishing his task. It was very rare that Hayate would fail Nagi’s orders, no matter how unreasonable they were.

However, it was not that Hayate failed the task, but he handled the task to somebody more reliable and suitable. It was Saki, who knew that Wataru was going to confess to Isumi. She successfully located Isumi and took her all the way to the park.

One had her efforts recognized, one had not.

Saki told Wataru to do what he had to do, even though she might not be very happy about it. She even made efforts to make the meeting successful, so that Wataru would have nothing to regret. If you ask me, this reminds me of Hina – in her case, the “Isumi” was first Ayumu, and then Athena. Ruka might actually be the third one…

Luckily for Saki, Wataru was not Hayate. While Hayate remained ignorant of what Hina had done for him, Wataru knew exactly what Saki was doing. He turned his head and looked worryingly at Saki, as he fully understood that what he would do might upset her.

However, Saki smiled and told him again to do what he must do. “Don’t worry about me. I am fine.” were her hidden words.

And so Wataru did it. He may be blushing, he maybe yelling, he may not be taking the best approach to confess. But, after 10 years of loving Isumi, he managed – at the break of a new day – to say “I loved you” in the past.

Isumi might look a bit dumb, but she was extremely sensitive this time. I think she was happy to hear Wataru’s confession, so she gave him an indirect kiss by putting the whistle into his mouth. She realized that Wataru used the past tense, and she offered him some wise words: If what he was talking about was in past tense, then he needed not continue. There would be a future for him – a future without a crush on Saginomiya Isumi.

Fight for the future!

That was exactly what Wataru would want to do. He would say goodbye to his past, and have a brand new start on a brand new day. The sky might still be dark, but it was only a matter of time for dawn to come. He would want Saki to be with him, to wait for the end of the night and the rising of the Sun.

So, another ship was officially sunk, and most unfortunately it involved Isumi again. She had given up on Hayate for Nagi’s sake, and Wataru gave up on her for Saki’s sake. We might think that it was a misery for Isumi, but apparently she did not take it that way. Instead, Isumi showed to us that it might not be a bad thing sinking a ship, if everybody could take it in a matured manner. 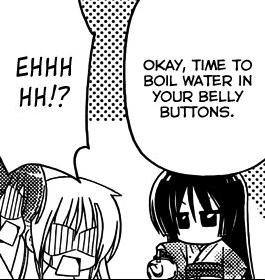 What’s next? Well, forget about Isumi boiling water on Nagi and Sakuya’s belly button. Ayumu also lost in her bet with Wataru as well, so she would have to – let’s see… oh yes – “work as a maid in [Wataru’s] new store, with an hourly wage of 300 yen”. Would she really do it?

In the next chapter we may come to something new again! Let’s look forward to that!