This gesture means that a secret is to be revealed...

Hayate went looking for some rest following Hina’s suggestion (or order), but then he decided for himself he would prefer the large bath to the nap room. Meanwhile, Luca went looking for Hayate following Maria’s suggestion (or prank), but then she decided for herself she would go into the Clock Tower. The two of them would be in the same building, and another meeting of fate would be… inevitable.

So, Hayate arrived at the large bath, which certainly was a wonderful view. Hayate decided that he would take up Hina’s offer (“Just go rest!”) and rest here. It seems that, in the end, he agreed with the one who “worried too much”. It was just that he wanted a bath instead of a nap. Fine…

This really is amazing!

Before we go on, we must appreciate that he tried to be careful. Instead of heading straight into the bath, he checked the whole bath and made sure that he was all alone. He understood that there was a good chance a girl would already be bathing, and when he was involved the probability of the said chance would be increased by 90%. This time, he did his best to make sure that he really was all alone. He didn’t want to face yet another pinch simply because he was careless, and he meant it.

Yet, as he took off his clothes, he thought to himself that there wouldn’t be any students coming for various reasons, and that was a big mistake. His logic made sense, but the problem is that it was still too dangerous to take anything for granted. Normally nobody would come, but sometimes accidents happen…

So, what kind of accident did he have there? It all began with the Student Council Trio trying to make up their Kakizome. To put it very simply, Kakizome is a kind of writing you would do at the beginning of a year. You would create poems about the new year, make your wish and put down some goals.

How do you write words so small with such a big brush?

From what Miki said, the Trio might have put down some goals in their Kakizome. Whatever they were, they seemed to have agreed that they could not reach them. As it was June in the story (and in reality as well, funny enough), Miki decided that it was time for them to readjust – and in their case, to lower – their goals.

So, Miki and Risa began writing, with extremely large brush as well. Strangely, although Miki warned loudly to be careful not to get any ink on their uniform, Risa and her both managed to get Izumi – who was not very enthusiastic in making her Kakizome – covered in ink. You have to think that Miki and Risa deliberately pulled such a prank on Izumi.

Obviously Izumi could not go to afternoon class (So it was noon.) in ink, so she had to go to the bath in the Clock Tower. On her way, she bumped into Luca, who was on the way to… well, I don’t really know. Now, Luca was also covered in ink, and Izumi suggested her to come along to the bath.

See, Hayate? You might not even dream about it, but two girls were heading to the bath when you least expected it.

Fact: Hayate had no nipples.

Apparently, Luca took much less time than Izumi to undress, and she entered the bath much earlier than Izumi did. She therefore had quite some time to be alone with Hayate.

Yet again, Hayate cursed his very bad (Some say very good.) luck, as he knew that he was in very, very big trouble. He did not have any clothes to give him a false sex, but the evidence of his true sex was right there for Luca to see – No, the milky water would not fool Luca for too long. It was only a matter of time before Luca knew the truth with her own eyes.

At the moment, though, Luca firmly believed that Hayate was a girl, and therefore she had no self-awareness whatsoever in front of Hayate. She came very close to Hayate, touched his skin with her finger, and leaned on his back with hers. Perhaps this was the closest skinship between two girls (?) in the series so far?

If you want to fool others, you have to fool yourself first.

In any case, he thought that at a time like this, he must not tell Luca the truth. Without any clothes, though, how could he fool her? An image then came into his mind: A true artisan could make delicious soup by merely adding the perfect amount of salt to hot water. The true mastery of any art is to put the least effort to make the greatest masterpieces. Cross-dressing was a kind of art, and Hayate could use his small pinch of femininity (Oh my God…) alone to cross-dress. That is to say, clothes are not necessary for cross-dressing. If he could cross-dress his mentality, then his cross-dressing would be successful even without clothes! 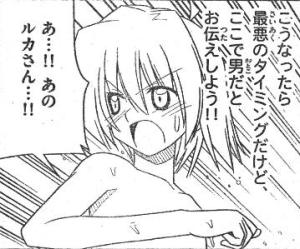 He was about to confess!

No matter what, his “cross-dressing his mentality” determination was lost as he looked at Luca’s naked body. He realized that he was a guy after all, and there was nothing that would change this fact. As he understood that he couldn’t fool her any more, he decided that he had better tell her the truth – even if that meant she would sue him.

As he opened his mouth, though, Izumi entered the bath as well. There was a second of complete silence, and then they both yelled: Hayate yelled “Segawa-san” and Izumi yelled “Hayata-kun”. As “-kun” was an honorific used mostly for boys, it was almost certain that Luca finally knew that Hayate was a boy…

Now, Hayate was with two naked girls in the same bath. Izumi became the fifth or sixth girl (after Nagi, Maria, Ayumu, and Luca, while Athena was debatable) Hayate had seen completely naked. Hayate and Izumi screamed, and we do not know yet how Luca would react. The whole thing had become a Hell of mess, so who’s gonna fix up all these…?

Let’s look forward to the next chapter!