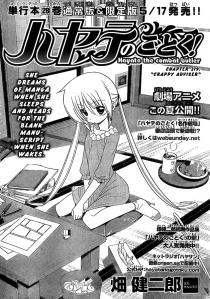 Nagi had a nightmare.

She dreamt that Hayate, Maria and Chiharu (Never ask why Ayumu, who had also been supportive of her, wan’t present.) congratulated her on having her doujinshi sold out. This is some achievement, and we couldn’t blame Nagi at all for giving praise to herself.

Yet, something strange happened. Suddenly, Hayate told her that she was trash, and that she could not do anything. Nagi was shocked. Hayate was her most beloved butler, and he decided to crush her self-confidence just when she was beginning to build it up.  This was too much shock for her, and she woke up – in a spectacular manner.

Sometimes it is just so good to realize that what you have had was only a nightmare. It reminds you that you have a much better life than in your nightmare, and if you suffer a huge failure in your dream, you would know that you could make your real life a little better by learning the mistake from the nightmare.

The time was 5 a.m. You could see that if Nagi was determined to wake up, she could be on par with Hina.

Passion drives you to work.

Hayate found her working, and suggested to make her some coffee. He then disccused with Maria on Nagi’s progress, and although Hayate was worried about Nagi’s health, Maria said she would be okay, and that was because Nagi looked like she was enjoying it. After all, Nagi would not have been working at 5 a.m. if she wasn’t enjoying it. For Maria, it was good that Nagi really enjoyed something more… serious.

Neither Hayate nor Maria really knew what Nagi intended to draw this time, although Hayate recalled that Nagi could have got some ideas from Ayumu the other day. 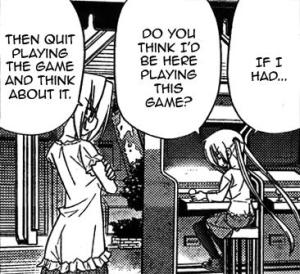 Passion drives you to play.

The other day, Nagi discussed doujinshi business with Chiharu in a video game centre. Nagi, having so little experience on doujinshi sales, did not really know how hard was it for her to sell all 50 copies. There are, after all, circles which can sell thousands of copies, so was it really that hard to sell – say – 50 copies? But then, Chiharu told her the cruel truth that, of all the circles:

It is anyone’s choice to employ the “half full half empty” theory to look to the better side of things, but if anyone is to suggest to Nagi that she could earn real money in the Doujinshi Showdown, it would be – more or less – irresponsible. Nagi did not have too much room to lose money, for she was (said to be) in a state of poverty, after all.

Nagi understood that she would be in a rather bad position. She knew that it would be difficult for her to be the 50% who could sell 50 copies, let alone to be the 30% who don’t lose money. But then, she decided to face such difficulties with her passion. “Doujinshi is all about passion”, this is what she have learnt from Luca. 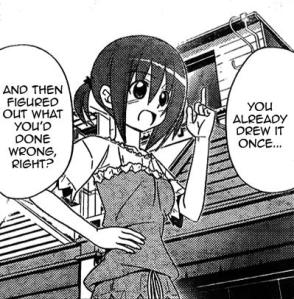 Then, Ayumu arrived, and returned Nagi the manuscript which she intended to show to Ashibashi-sensei. As Chiharu suggested, she put in loads of efforts into the scripts, although the “response” from Ashibashi-sensei was more discouraging than encouraging (To be fair, though, he said nothing to Nagi before she ran off.). Now, Nagi had a  chance to look into her own scripts again, so what did she think?

“It was pretty bad,” said Nagi. Given that she had so much confidence (“Masterpiece”, anyone?) back then, it really was some reflection and some growth. The only way you know that you are better than before, is that you recognize how bad you were from your current point of view. This is why Chiharu thought that Nagi really had some reflection.

Ayumu, on the other hand, thought that it would be a good idea for Nagi to redo what she had done. Indeed, if Nagi could fix her mistakes in the original, then the “remake version” would definitely be a better manga. Most importantly, her efforts on the original would not become a complete waste.

On the facts, everything above made sense. However, the thing is that… Ayumu’s theory went wrong from the very beginning. Nagi did NOT really know what went wrong with her original, so there was not really much hope that she could “fix those parts”. A remake of the original, therefore, would probably not be a better manga, let alone being a masterpiece as Nagi immediately thought.

The power of normal can kill.

Anyway, Nagi had decided to follow Ayumu’s advice and do a remake on her original manuscript. Given that it looked like a detective story, could it mean that the “explosive sex appeal” idea, and the inspiration from Hayate’s crossdressing, would be abandoned? Or, would Nagi write them into her new script as well?

What’s more, Ayumu gave a suggestion to Nagi in this chapter as well. You heard her: kittens, because they are cute. She even went as far as naming the – arguably – most popular one. So, could we expect Nagi’s new manga to be a detective story with “explosive sex appeal”, a crossdresser and H*ll* K*tty?

To Chiharu, none of the above made sense. She has foreseen that this whole thing might not end well…

I almost thought that she was living in a prison.

Meanwhile – Wait a second. I am a bit confused here. The whole conversation between Nagi, Chiharu and Ayumu was something happened in the past, something prior to Hayate recalling it to Maria in this chapter. But then, with the word “meanwhile”, we suddenly come to Luca’s apartment. My question is, did the “meanwhile” refer to the time Nagi and co. discussed doujinshis, or did it refer to when Hayate and Maria talked?

In any case, Luca was in deep thoughts in her bed. She recalled her last two sales: she sold 2 and 9 copies respectively. It really was a huge improvement, but for someone who aimed to be a popular mangaka it was not an acceptable figure, especially when she knew that there were, and are,  people selling thousands of doujinshis. She thought that her manga was not any good. She was annoyed and she wanted to talk to someone, someone she could trust…

The toothbrush survived, but the pencil was dead.

Meanwhile – and this time we know which “while” it was referring to – Hayate and Hina were talking in the Student Council Room. We don’t really know how much Hayate had told Hina, but apparently he gave her more or less the full story of his meeting with Luca – including the “small detail” that he saw her naked – so that Hina knew Luca thought that Hayate was a girl. The only bit we are not sure whether Hina knew was the battle between Maid Star and the Getter Robos, but that doesn’t really matter. Yozora could wait, obviously.

Hina was clearly angry with the “small detail” Hayate had just told her, and she broke a mechanical pencil with one hand and threw both bits at Hayate, who dodged. For me this is a very funny and enjoyable interaction between the two. Hina expressed openly that she was not happy without showing an intention to kill Hayate (Mind you, if she threw the pieces at Hayate with full power, they would not fly in a parabola.), and she even playfully said “Shoo! Shoo!” as she threw the pieces at him. Hayate did not really think Hina hated him, and did not go into his usual “I am sorry! I am sorry!” mode. Funny enough, compared to the previous teasers, this “throwing pencil pieces” scene showed a much more… balanced side of Hayate-Hina.

Hina stood up and told Hayate to tell Luca the truth the next time he met her. Hayate answered that he had always wanted to do that, but… To be honest, this is rather difficult. The truth is too ugly, although the lie might be even more ugly. Telling Luca the truth or the lie could both end up hurting her more, so it was not an easy decision for Hayate to make.

Just then, Hayate’s phone rang, and he received a text message. Apparently it was from Luca, and the first thing Hayate did was to open his mouth to borrow Hina’s clothes. Hina blushed and was thoroughly shocked.

It was the second time Hayate asked Hina to lend him clothes. The first time was more like a “reservation”: Hayate wanted Hina to be aware of the possibility that he might have to borrow her clothes. This time was the real “application”, and Hayate would want to have Hina’s clothes right there, right then.

So, would Hina help him? We had a poll back in Ch. 315, and of the 73 votes I have received so far, 90% was of the opinion that Hina would. I don’t know if you would change your mind after almost a month since Ch. 315, but if you wouldn’t, then many of you would be expecting Hayate to be in Hina’s clothes next chapter.

That said, “Hina would help Hayate” doesn’t necessarily mean that she would take off her clothes and give them to Hayate. With Hina’s intelligence, and her crystal-clear disapproval of crossdressing shown in Ch. 315, perhaps she would suggest another solution to Hayate. Let’s see.

There are quite a few things for us to look forward to, as well.

For this reason or that, let’s look forward to next week!