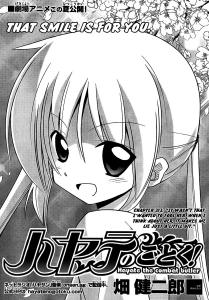 To say that Hata loves Nagi is a huge understatement.

Hayate and Maria gazed at each other, through the door, without a word. The world has stopped.

Maria was shocked to see that Hayate was in a karaoke box with a girl, while he was dressed as a girl himself. Hayate explained in his mind that this happened for a lot of reasons, and Maria questioned in her mind that just what kind of reasons did he have.

It was the longest moment in Hayate's life.

After a brief arguments in their minds, Maria turned away and left without another word. Sometimes, silence does much more damage than words, and Hayate knew from Maria’s silence that he was in really big trouble, and he needed to talk to her right there, right then.

This story tells us not to laugh at pranks like they have nothing to do with us. Someday, somehow, it backfires – badly.

Alternative explanations suggest that Maria was jealous. What did she say? “There’s nothing wrong with going to a karaoke box with a girl, but why are you dressed like that?” Read more into her words and we can see that she did not want Hayate to be with other girls while in girl’s clothes. She enjoyed watching Hayate cross-dressed, but she preferred it to remain her private entertainment, so she was not happy with him showing other girls his cross-dressed form.

When Maria was saying that line, she blushed and looked unhappy – a typical Tsundere face. Tsunderes often say things which are opposite to what they think, so if – I say, if – Maria was in Tsundere mode as she said the line, we actually have to reverse her line to get the real meaning. Therefore, she was okay with him cross-dressing, but she  was not okay with him going to a karaoke box with another girl! That was, definitely, jealousy.

In the above there are three explanations to Maria’s words, one suggesting that her enjoyment of a prank backfired and two suggesting that she was jealous. Your preference over these options depend on what you think about Maria. For me, I simply never understand what Maria was thinking.

Hayate opened his mouth and began to explain, but Luca appeared right at that moment. Hayate’s mind then began to race. Luca was vulnerable to lies, but she trusted Hayate, so should he preserve her trust in him by protect his lie that he was a girl? Or should he be honest to Maria and Luca, and reveal that he was a boy?

After 0.2 seconds of thinking, he chose the former. So, was this a good choice? Maria was burnt into dust by his words, and Luca was even more certain that Hayate was a good girl. Hayate began to think that this was the wrong choice: He gave Maria a rather bad impression, and he found it was even more difficult to tell Luca the truth – if he ever wanted to.

Ever since he was forced to cross-dress by Kotetsu in the previous Doujinshi Convention, Hayate has been telling lies to cover for his previous lie, and there we go with the loop of “lie after lie after lie” in real-life tragedies. Not to worry, though, for Hayate no Gotoku! was not real life.

A really bad feeling about this...

Hayate had a really bad feeling about the situation, but his thoughts were interrupted by Luca, who offered to sing a duet together. She then received a call from Atsumari, who told her to return to the studio – immediately – for a re-take, because there was a problem with one of the shoots.

Luca faced a dilemma. On the one hand she wanted to have fun with her new but dear friend Hayate, but on the other hand she had serious business to do. Popular she might be, she cannot afford to skip work just because she didn’t want to work. Skipping work causes big harm to your popularity, this is a lesson I learnt in the last few weeks. Sigh.

Luca understood that she had duties to perform, and she had no choice but to say goodbye to Hayate and go to work. Hayate understood, and honoured her professionalism. As he watched her go, he couldn’t help but exclaiming that, well, their fates were really separated…

At night, Nagi returned home with Chiharu (You could only guess what Nagi could do during her long wait…), and she expressed her disappointment that she couldn’t meet Luca. She then asked Hayate why he was still wearing girl’s clothes. Hayate replied that it was her order that he wore girl’s clothes, and he was right. Nagi might have forgotten about it, but it was her direct order, recorded in Ch. 310, that Hayate wore Ayumu’s clothes until the Doujinshi Showdown was over. Without her counter-order, he simply could not disobey – even though he tried once in Ch. 311.

So, Nagi finally ordered him to change back into his own clothes, and Hayate was ready to comply, but just at that moment Luca arrived. Apparently she finished her job quite quickly, and so she was able to, finally, go to the Violet Mansion to meet Chiharu – and Nagi.

The fateful meeting of the three (?) girls.

There stood the popular singer who had just befriended Hayate without noticing that he was a he, and was about to give thanks to the girl who defended her doujinshi in front of the Maizumi guy. There stood the butler who lied again and again on his sex, identity and occupation, and was reluctant to tell his new friend the truth while owing his Ojou-sama (a.k.a. his life itself) a proper explanation to the mess. There stood the Ojou-sama (a.k.a. Hayate’s life itself) who contributed hugely to the current mess, facing her butler whom was in a dilemma and her friendly rival (Whether they were “friendly” was highly questionable.) whom has just befriended her butler… This is your destiny, you three.

This is complicated, this is interesting, and most probably it would be fun. Let’s look forward to the next chapter, in which – most probably – the three would do a lot of talkings!