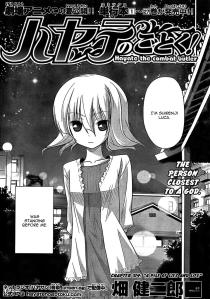 You think for yourself whether to join Luca-ism.

Nagi’s monologue suggested that, she considered the person closest to God. The margin line provided further explanation to this. Nagi was in a state of despair before reading Luca’s doujinshi and attending her concert. Luca’s doujinshi, and the confrontation with the Maizumi guy, reminded her of the passion for manga. Luca’s concert, in which she shone brightly through her songs and performance, set Nagi on fire, and made her determined to draw doujinshi again. Luca brought out the courage and hope in Nagi, and so to Nagi, Luca was almost her saviour and her Goddess.

Now, her Goddess was right in front of her, and called her by her name (Obviously Chiharu already told Luca a lot about Nagi.), Nagi was completely in awe. She had no doubt when Luca said (or bragged) that she had 1017 fans. She agreed eagerly when Luca offered to shake hands (with the effect that Nagi’s lifespan would be increased by 100 years), and she agreed immediately to call Luca by her first name (Although, to be more exact, it’s “Luca-sama”…). She couldn’t help but using Honorifics to Luca, even though Luca threatened to hit her with her self-invented Stag Beetle Fist. As Hayate suggested, Nagi and Luca became friends soon enough, and he – as well as some readers – looked forward to a good friendship (and rivalry).

Hayate then reflected on Luca. He thought that she was an honest person, who believed that if she was open to others, they would also be kind to her. She trusted people with an open heart, and she hoped people to trust her with open hearts too. It was “trust” which created the bond between her with her fans, which made her a super idol, and which made her friends with Hayate…

The problem with this “trust” thing was that, he had been lying to her. Since the day they met, Hayate had been lying that he was a girl. He had not done anything which was really damaging to her (if you count out the clothes-changing scene during the concert), but the fact remained that he had not been honest to her, a girl whom explicitly asked whether she could trust him, and to which he replied “Leave it to me.” He simply cannot imagine what would happen when she found out the truth…

Then Luca remembered. Nagi told Hayate, in the last chapter, to change clothes. Neither Nagi nor Luca really understood the seriousness behind such an order, but Hayate did. As Nagi opened her mouth to make her order again, Hayate grabbed her by her shoulders, thus effectively made her shut up. He told Nagi that wearing this outfit was fun, and Nagi wondered whether she had gone too far with her prank…

Well, to a certain extent you had, Nagi.

Give me one reason why this is not romantic.

Luca picked up a small detail in their conversation: Hayate’s name. Obviously this was a boyish name, and Hayate wondered if his name would lead Luca to realize that he was actually a boy. However, Luca was (perhaps) too preoccupied by the assumption that Hayate was a girl, that she simply thought that he had an imposing name. She commented that Hayate was a cool girl, and if he was a boy she would have already fallen in love with him.

With that we can abandon the “Luca is a lesbian” theory, for she suggested clearly that she loved boys… but wait a minute! She gave Hayate a hug the next second, and also asked him to call her by her first name!

So… what’s going on here? Was Luca a lesbian? Or had she figure out that Hayate was a boy? Or was the hug a platonic one, without any romantic meaning at all? Well, well, why not conduct a poll on this? Vote at the polling section at the end of this post! 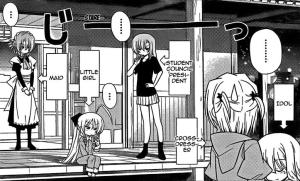 What are the odds of Hayate staying alive after the next chapter?

Fr. Ghost commented that it was Hell for Hayate, and we surely know what he meant. The three most powerful girls in the series were all there, watching Hayate and Luca with certainly unfriendly eyes. Alice was Chibi-Athena, Hayate’s first and, so far, only love. Maria topped the list of the “others”, and had recently been successful of making Hayate blush. Hina was someone from whom Hayate could never keep a secret. So, what would they do, and what would Hayate do? Let’s look forward to the next chapter!