Remember that in the last chapter, Hata invited us to deduce the truth behind the formatted camera of Miki’s? On the cover page of this chapter, the truth is revealed!

There is only one answer!

Yes, it was Hayate. He found Miki’s camera when he returned to the classroom to take Nagi’s PSP, and then he watched the video(s) stored in the camera, and finally he decided to format it. As I suggested last week, based on the facts we were given, this is the most straight-forward and simple conclusion. For once in Hata’s manga, one plus one equals two.

So how did our dear readers perform in the poll I set up last week?

So far, there is a total of 90 votes, and I find this number very decent. Hayate got 55 votes (61%) so he was clearly your pick, and it turned out that more than half of you got the right answer. Nagi came in second with 10 votes (11%), which was also understandable because she would care about her PSP. Eight votes (9%) went to “Other”, but the system did not show me what you have written down on the text bar. Quite a few other characters got some votes, but Ayumu, Isumi, Sakuya and Miki got nothing.

Well, we know that Hayate had the actus reus (guilty act), but we know little about the mens rea (motive). It was clear that Hayate watched the video(s), and from he expression we could tell that he did not enjoy it (or them). But then, what exactly was so disgusting to him, so that he decided not only to delete the video clips shot by Izumi, but to go as far as formatting Miki’s camera?

On readers’ request I am conducting another poll, and this time we vote on Hayate’s motive behind formatting Miki’s camera. I included some crazy ideas, but there are also some “more sensible” choices for you to pick. Although we are not entirely sure whether we could have a clear answer to Hayate’s motive, it doesn’t harm to have another guessing game just for fun, right? 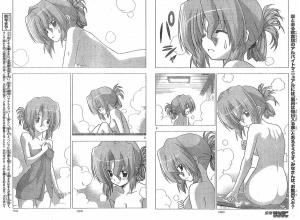 Before anything, there were 2 pages of Maria bathing scene.

Of course, this is fan-service, but when we have 3 Maria bathing scenes in slightly more than a month (Ch. 304 in January, the first page of Vol. 27 in February, and Ch. 309 in February.) then such fan-service would become annoying. Personally I doubt if Maria fans really would be happy seeing so many bathing scenes in such a short time, especially when this scene has nothing to do with the rest of the chapter. If fans do not really love such services, could these really count as “fan-service”?

There is an interesting change in Maria’s profile on the margin. Now the words “important bathing character” （お風呂要員）have been added. Well, it seems that Maria has officially become the “main huru-ine”（メイン風呂イン – the main girl in the bath）…

She was speaking rather casually.

Then we go back to Nagi, who claimed that she had no idea with her manga. She had three weeks left before the doujinshi showdown, and of course she had to complete her own work (and print them) before then. Still, you can’t do anything in creative industry if you don’t have any idea at all, so Nagi was in trouble.

Sakuya came for a visit, and she met Chiharu there. Apparently Chiharu did not tell Sakuya she was living with Nagi, and that probably was because she did not want to worry her.  Sakuya was surprised to see Chiharu in the Violet Mansion, and she opened her mouth to talk to Chiharu…

This is no good!

Wait. There is a problem. Nagi and Hayate did not know that Chiharu was working as Sakuya’s maid. In fact, Chiharu and Sakuya were not supposed to know each other at all! So, it would look extremely suspicious if Sakuya could call Chiharu by “Haru-san” – that’s not even her name, but her nickname. As such, Chiharu interrupted Sakuya, and dragged her away for a private talk.

Somehow, this would look even more suspicious. Luckily, Sakuya understood Chiharu’s situation, and neither Nagi nor Hayate cared too much about their private talk, so everything was fine.

It really was a long time ago...

Nagi then came in and asked Chiharu to look for ideas together. Sakuya wanted to come too, but Nagi rejected her, as she thought Sakuya would not be any help. Well, those words hurt, but as Sakuya had never been of any help to Nagi’s manga, you couldn’t really say that Nagi was wrong…

Sakuya learnt from Hayate that Nagi one-sidedly relied on Chiharu, and her mind became complicated. A long, long time ago Nagi relied on Sakuya, and now Nagi relied on somebody else and said Sakuya “would not be any help”. That meant that Nagi abandoned her for someone else!

No! Sakuya was sure that she could be of help to Nagi. She was still someone whom Nagi could rely on, just like a long, long time ago! In order to prove her own worth, Sakuya decided to do something impossible: To understand Nagi’s manga!

As it turned out, Sakuya could not have a single clue about Nagi’s manga. However, as Chiharu suggested that Nagi “might have talent”, perhaps Chiharu did see something Sakuya didn’t. So, did it mean that Nagi was right about her, that she “would not be any help”…?

By the way, we could see that Hayate was doing all the explanations. Was he only reciting Nagi’s explanations to him, or did he really understand what Nagi was drawing?

Hayate saw that Sakuya was slightly crestfallen, so he suggested her not to try too hard. Yet, Sakuya said that she wanted to understand what Nagi was drawing. It was crystal clear that Sakuya cared about Nagi very much, and Hayate commented that Nagi was very fortunate. Indeed, she was fortunate that she had so many people who cared so much about her.

Out of absolutely nowhere.

Then again, out of nowhere, in came Isumi, the only person in the whole world who could understand Nagi’s manga. Sakuya might tease Isumi for a lot of things, but when it comes to “understanding Nagi’s manga”, Isumi was the pro! So, listen to the pro, and read like the pro!

According to the pro, the reason for Sakuya’s failure was that she was a boring person, and in order to understand Nagi’s manga she had to become interesting… Does anyone understand what Isumi was talking about?

Well, if we want to elaborate her words a bit, we could say that Sakuya was a smart person with common sense, so sometimes she could be a bit too serious. In order to understand Nagi’s manga, you have to give up your seriousness, and develop a sense of humour which does not follow common sense. Emm… Is that what you meant, Isumi? 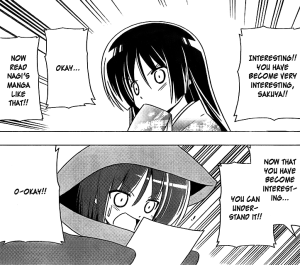 The thing is, they were both absolutely serious about this.

Anyway, that’s the theory, and now Isumi put this into practice, on Sakuya. She gave Sakuya a cock costume, and asked her to dance in that costume for a bit. Sakuya followed her instructions and performed a few steps, and Isumi commented that Sakuya had become an interesting person. She then gave Nagi’s manga to Sakuya again, and said that she could understand Nagi’s manga now.

Unfortunately, that did not work. Outraged, Sakuya threw Nagi’s manga onto Isumi’s face.

Shot of the week.

What went wrong? Well, even if you do funny acts, it does not mean that you are funny yourself. Sakuya simply followed Isumi’s instructions, and although her acts were extremely funny, that did not change anything in her mind. When she had not changed for a bit, her understanding of Nagi’s manga would also not change for a bit.

It was late at night. Sakuya and Isumi left, and Nagi and Chiharu returned. Nagi was unhappy that Sakuya had left, for she wanted to show Sakuya her ideas, as she trusted her intuition. It seems that, although Nagi did not trust Sakuya in looking for ideas, she trusted Sakuya in deciding whether the ideas were good or bad.

Hayate was happy. Sakuya cared for Nagi, and Nagi trusted Sakuya. If Nagi required Sakuya’s support, she would always be there for her. She might not understand Nagi’s ideas, but at least she would always try.