The most popular character: Hayate or Nagi?

Yes, finally, the official announcement of the third Character Poll. If you are looking for my predictions on the Poll, please see this. This piece, therefore, would focus on Ch. 292.

In her despair of giving up the mangaka dream, Nagi was invited to the Doujinshi Convention by Chiharu. In the words of the latter, getting the tickets would “raise [the spirits of those of the Otaku bloodline] 3 times as much as normal”. Unfortunately, I understand what Chiharu meant to a certain extent, because I would also get excited when such exhibitions were held at my place. I couldn’t really explain why we would get so excited, so you might well regard this as a strange behaviour of our kind.

Well, Hayate did not look too happy when Chiharu called Ojou-sama an “Otaku”, but for the time, anything would be good if Nagi could cheer up. 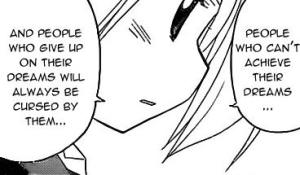 Speaking of yourself, huh?

Perhaps a little bit unexpectedly, Hayate then gave us his view (or that of Kamen Rider 555) on dreams and wishes. “But dreams are much like curses. People who can’t achieve their dreams and people who give up on their dreams will always be cursed by them.” We knew that Hayate had a “dream” on 3LDK, which was unfairly laughed at by a lot of people, and as a butler who was heavily in debt he could never have this dream fulfilled anyway. He also expressed the wish to reunite with Athena in the Athena saga, but the matters between him, Athena and Nagi were so complicated that Athena decided to push Hayate back to Nagi despite his confession.

Thus far, we could say that Hayate himself has already given up on 2 dreams. He would be someone who could understand how it feels when giving up your dreams, and so he would hope Nagi not to give up on hers.

It might be difficult to have your dream come true, but it would not be any wiser to give up. A lot of people have a lot of dreams which they do not want to give up until the end of their lives, and we should understand them even though their persistence is sometimes annoying.

A wish... Did Hayate have one?

Chiharu then threw Hayate a question: “Do you have [a dream] that has cursed you like that? Or maybe a wish?” While Hayate did not answer himself, we could give him an automatic answer: “To protect Ojou-sama!” Honestly, I have no objection if this was really his dream, because this might already be the best dream he could afford, and he would be happier with this than having another dream which God (Hata) forbids.

But Hayate did not answer the question. We did not know what was on his mind when being asked this question. So let us not assume anything for now.

It would be fun tomorrow.

Meanwhile, Yozora was on the phone again. She reported to the other end that the “28th” photo (Arh, this term is stupid.) was discovered, but it was okay for now. It seems a little bit more clear that she was not going after Hayate himself, because in the 2 telephone conversations, she talked about Hayate as a third object, i.e. not the very thing she was stealing. Perhaps she was more concerned about the Violet Mansion and the books on the old bookselves?

The funny thing was that, if Yozora wasn’t around when Hayate and Chiharu found the photo and the books, it would be the dog which reported to Yozora in the first place. So, was the dog an Animagus or what?

In any case, she would go and “take care of it” on the next day, i.e. the day of the Doujinshi Convention. Given that Nagi, Chiharu, and later Hayate would be out of the Violet Mansion, the only one remaining in the house would be Maria. So, would it be a “Maria vs. Yozora” mind game or even physical fight?

Sunshine 60, on top of which Nagi would scream on 12 June.

So Nagi and Chiharu arrived at the Doujinshi Convention, and this was “A Whole New World” for Nagi. She never knew that there were so many people in this world drawing manga, and that there were so many people who were testing their talents in conventions. What Nagi should have understood was that the manga world isn’t split into Ashibashi-sensei and losers. She could build up her career here, there, everywhere, in a lot of conventions.

Well, this is only what I think about Doujinshi Conventions, and certainly Nagi would have her own thoughts. We would wait and see what she thought about this convention.

A lot of old faces.

It turned out that the Doujinshi Convention did not only attract Nagi and Chiharu, but also a bunch of people we knew. First of all, we have Kaoru-sensei, who would be sharing the same desk with Nagi and Chiharu, selling his doujinshi. Mind you, his nickname was “Snow Road”, a.k.a “Yukiji”… We also have Wataru and Saki, who should have promising screentime in this arc, and Kazuki, someone I was almost certain was dead… Kotetsu was also there, and I will come back to him later. Well, it is always good to welcome back the old faces, and I would be looking forward to their interacting with Nagi and Chiharu.

I thought she told you to watch over her OUTside, not INside the building.

Hayate stood outside the building, thinking. Nagi told her to watch over her outside the building, because she knew that if he was there, she would count everything on him. No, the manga career was her ambition, and something she ought to fight on her own. Her dearest butler could take care of everything else, but she wanted to walk into her career path on her own. Thumbs up for Nagi.

But Hayate wasn’t so sure about it, and was thinking how to get into the building without a ticket. There came Kotetsu, who caught Hayate’s attention by “accidentally” dropping a ticket. He was here to display his doujinshi on trains. Hayate was of the opinion that no one would buy such a doujinshi, but Kotetsu’s retort was really good: “It doesn’t matter if nobody buys your doujinshi! You draw doujinshi only because you want to!” The joy to have someone who understand and appreciate your work is only a bonus.

So Kotetsu invited Hayate into helping him with the convention, but Hayate would have to wear a maid dress. In the next chapter, then, would we be welcoming the return of Ayasaki Hermione?

Last but not least, we have Luca again! But yet again, she did nothing more than delivering one line or two, and showing us her serious face. Chiharu said that the one she was helping – presumably Luca – could not come today, but now Luca was in Ikebukuro herself, so would she meet Nagi in the convention? The girl with glasses suggested that she already put “the things” nside Luca’s locker in Sunshine 60. What were those “things”, and what did they have to do with Luca’s “possibilities”?

Let’s look forward to the next chapter!