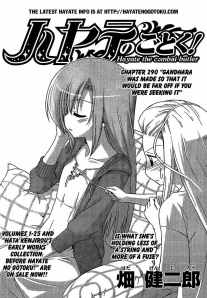 Miki: "I am only unwrapping my birthday present! What else do you think I am doing?"

No matter whether you are grateful or disappointed that Hina and Miki only appeared on the cover page, let us simply accept that as a fact and move on. 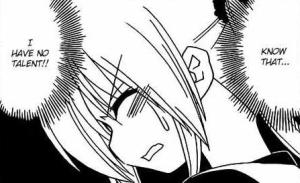 We all have such a moment.

If you read Eyeshield 21, you would have come across the following line of Monta: “There is a setback for every boy. At a certain moment they would come to realize that they cannot become professional baseball players.” In Japan a lot of kids play baseball, and it is the dream of many of them to become professional players. Yet only the best of the best would have their dream come true, while the others have to decide for themselves whether to carry on with their now very distant dream. Some of them would give up playing baseball, some would be satisfied to be amateur players of holiday matches, while some would stand up again (and again) and fight till the end of it.

Although it was manga rather than baseball, Nagi was facing a similar scenario.

She thought all along her life that she has a special talent in drawing manga, and she had one loyal fan. She had failed in previous manga competitions, but she simply thought that it was because, in the judges’ words, she lacked in life experience, which of course would improve with time. She had been criticized by several people, but their opinions were mainly that her manga was hard to understand, which Nagi somehow agreed to a certain extent.

But she never thought she was not talented. So far she could only come to agree that her talent was so much hidden that it really was a bit difficult to be recognized by people, but once she was discovered she would become the best mangaka the world had ever seen. In other words, she never doubted herself. No matter how many criticisms she received, she never questioned her own talents.

However, her confidence was finally shaken and torn into pieces. What she saw in Ashibashi-sensei’s work was not only an excellent manuscript, but something that she could not be able to draw even after 100 years. She came to realize the difference between herself and the mangaka she was so determined to surpass, and she thought it was simply impossible to be greater than Ashibashi-sensei.

So much was her internal struggle, which was revealed in this chapter. 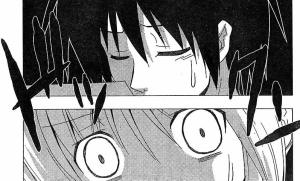 To be fair, he hadn't even say a word.

The hardest blow for her, therefore, was the shame of having Ashibashi-sensei seeing her manuscript. She knew that she couldn’t bear to have Ashibashi-sensei telling her that she was not good enough. That would pretty much deny not only her manga abilities, but also her own value. Therefore she attempted to retreat. She wanted to save her dignity and pride, and even hope.

Yet, Koutarou, whose dumbness was even above Hayate, snatched Nagi’s bag. During their struggles for possession, the bag flung open and the manuscript was all over the air. Ashibashi-sensei picked one page, and looked less than satisfied with it. That confirmed Nagi’s deepest fear, and she ran away.

Obviously Koutarou was at fault here, and both Ayumu and Ashibashi-sensei blamed the whole thing on him.

On the other hand, we had Ayumu shining yet again. She coldly snapped at Koutarou’s lack of courtesy and intelligence, but nicely followed the mess up for Nagi. This showed Ayumu did have a golden heart and a bright spirit, and was an excellent cheerer. We already had seen her cheering for Hina’s love issue in the Athena saga, and here we saw her helping Nagi out of the embarrassment. At the end, she had Ashibashi-sensei’s words that he would look at Nagi’s works again when she was ready. Didn’t Ashibashi-sensei look like he had a crush on Ayumu or something?

No matter what, Ayumu was simply the best type of friend for everyone. 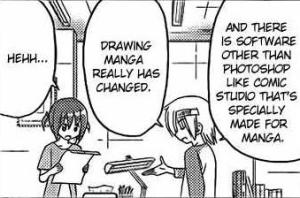 Imagine Beckham explaining the meaning of "offside" to Victoria .

So far, how do you feel about the so-called Koutarou-Ayumu ship? To me these two displayed quite an interesting interaction. Ayumu listened attentively to Koutarou’s lecture on manga techniques. She showed her dissatisfaction with Koutarou’s insensitivity so naturally you would think they have known for quite some time. Koutarou even showed some interests in her: He stared at her, watched her go and talked about her with Ashibashi-sensei. I don’t know if Hata planned for them to be together, but even if it was a one-day-ship, it was still quite nice.

Ashibashi-sensei suggested that something similar happened two days before. I wonder what he meant by those words.

Nagi ran all the way back to the Sanzen’in Mansion, which symbolized her identity as the child of Sanzen’in, as Sanzen’in Nagi. As she was questioning her own existence, there was no better place for her to go than her original home (in Japan, at least), where somehow she truly belonged to.

Maria found her there, and she calmly listened to Nagi when she was crying and yelling. Maria did not lecture Nagi nor cheer her up with empty words, but simply offered her a warm hug and remind her that she and Hayate would stay by her side, no matter what. That did not solve anything, but Nagi calmed down and returned home. 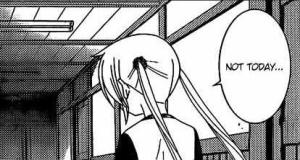 Yet, that did not solve anything. Nagi was still so down because of the blow, and she could not bring herself to go reading doujinshi with Chiharu. This was perhaps the darkest moment so far in her life, and if she wanted to see sunshine again, she would need to stand up on her own feet. The question is, who would give her the courage to wipe away her tears, to accept her own weaknesses, and to pursue her dream again?

Surely this “Nagi’s Path to Mangaka” arc would be very, very long, but Hata has already assured us the importance of this story, so let’s stay focused till the end of it. Although the current mood is quite dense and sad, let us still look forward to the next chapter!