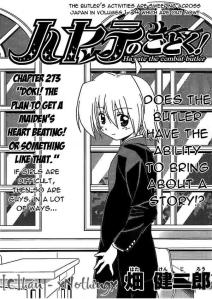 So, the little adventure of Hayate and Maria has ended (or at least paused…), and in this chapter the stage was moved to Hakuo Academy. It must mean we were going to see… Kaoru-sensei. 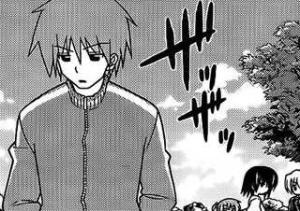 With all honesty, this guy was really not bad. If Hayate has loved Athena for 10 years, then Kaoru has loved Yukiji for 15 years! Somehow I think that the reason he has been single for 28 years was not that he was an Otaku, but he has devoted himself to a single woman, so he could simply not love another woman. Well, you may call him a fool, but if Hayate could be loved because of his long-lasting love, the same should go to Kaoru. This manga has too many lovable girls, but almost no lovable boy (or man) other than Hayate. It wouldn’t harm if we have another male character to love…

You know, it is always the immaterial thing that makes a rich guy unable to find a girlfriend.

Anyway, now Kaoru sensei faced a problem that is also the problem of many single men: They are actually good people, who are rich, clean and good looking, but women don’t like them. Why? It is because they don’t have the charm. Remember, women don’t look for money alone in a relationship. Sometimes, all the times, feeling is important. The touching moment is extremely important!

So you are asking far too much from a boring Otaku. He has no experience with women, so he never learnt how to charm them. Well then, Risa gave him a suggestion: If you don’t know how to charm people, ask the Pro! Perhaps surprisingly, or perhaps not, Hayate was referred to as the Pro by Risa. And he did not disappoint her, by demonstrating his charm on girl after girl, from a nobody to Hinagiku… Some people now think that Hayate was too dangerous to be alive…

Well, we always know that Hayate can be charming, especially when he put up his business smile. But when you put up your business smile, you are only doing business. That is what he was doing in this chapter. I think he wasn’t trying to seduce the girls, but to him this was the best way to handle girls. He wanted everyone around him happy, and he already had enough experience to figure out how to do it – although apparently he didn’t know the “side-effect” of his actions. He did what he has always been doing, but in this chapter he has a new-found confidence while doing it. He was still the Hayate we know, but em… should we say he has grown up a bit? 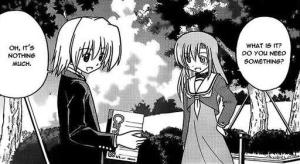 It has been a long time since they were BOTH smiling.

Then, out of nowhere, Kaoru (I am quite certain that it was him, not Risa.) came up with the idea that he should let Hayate try on Hina. Well, there was an obvious reason: Hina is the younger sister of Yukiji, and as sisters they should share some triats in common. If some charm could work on Hina, perhaps he can do it on Yukiji. Well, perhaps this is a brilliant idea, but poor Hina became the victim of his experiment, and we suddenly had a Hayate-Hina moment.

Perhaps it signified a new start between them.

Although I said Hina was the “victim”, the Hayate-Hina moment was still extremely lovely. It began with both Hayate and Hina speaking cheerfully with each other. Hayate was not scared to see Hina, while Hina was not shy to see Hayate. Then we have Chabo, the chick that was saved by the two, landing on the note when it was held by both Hayate and Hina. To me, this particular scene was absolutely beautiful. Even when Hayate ruined the moment by making a bold promise, Hina’s “retort” was simply that she was leaving, and Hayate was not terrified by her response. In a lot of ways, this was quite a good scene for the two. 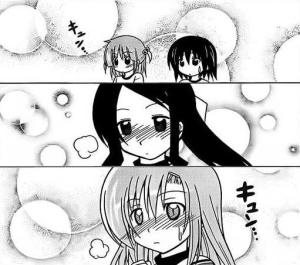 A lot of people say they cannot see the difference...

… Oh yes, I nearly forget that I promised to have my say on the controversy over this chapter. To put it simply, the controversy goes this way. So now Hayate has his charms all over the girls, including Hina, so Hina was actually reduced to a shallow fan-girl, and Hayate just played with her like she is a nobody!

Well, first of all, we can’t be sure if Hayate really played with Hina, for when he was supposed to be playing, he was making a promise to Hina, that he will fight the strong enemies for her. Second, Hina was only 16 and Hayate was her first love, it wouldn’t harm if she was sometimes a bit shallow. Third, even if she was shallow in this chapter, but she is a regular cast, so she has a lot of time to win Hayate’s heart, which means that there is no need for her to rush in the very chapter she reappears in this new era. So, let us not worry too much about Hina, and enjoy the Hayate-Hina moment, which was short but shiny. 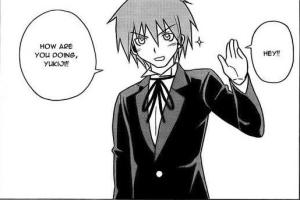 Well, in the end, what has Kaoru learnt? Nothing. He thought that he could make a difference simply by changing into a butler’s suit. With that, he was hopeless. The road to love was still so long for an Otaku.