Here I pick my personal Top 5 Hinagiku Moments up to and including the Athena saga. As this post would be quite long if I make all five rankings into one post, I would just split the post into five. Please visit the other posts for other rankings!

Rankings are to be released according to the following schedule:

So here we go with this week’s ranking!

What would you expect of a supporting character who fails to confess his/her feelings to the main character? Yes, he/she would disappear from the stage, and go crying in the dark. But this is not the case for Hina. Yes, she had been upset for almost 20 chapters (Oh come on, it was even less than 24 hours in the story!), but then she decided to step up again and go kick ass. Oh, yes, credits to Yukiji and Ayumu for counselling Hina. You are truly wonderful.

Upon knowing that Hayate and Athena were both in danger, Hina decided to join the front battle line. So, she acquired a new weapon, which was not only a weapon, but the Shirosakura, the ultimate sword of justice! As some readers pointed out, this was not supposed to be her weapon, but it suited her well.

With the determination to save Athena and Hayate (and Isumi, of course.), she flew through the air screaming, and beat up the monsters in her (stupid) hero suit. Well, that was not enough, so following Isumi’s instruction, she had to do this! 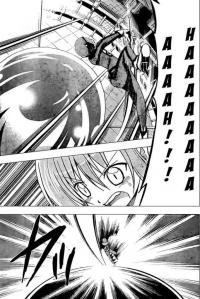 "My name is Katsura Hinagiku! The sword that cleaves evil!"

If you ask me, please play “SHERO” as the background music, thank you!

With this single strike, she… let’s see, saved 10 (12 if you count in Hayate and Isumi, and 13 if you count in Athena.) people’s lives, gave Hayate the room and time to fight King Midas, and through her transformation into gold, provided hints Isumi needed to know the name of King Midas. Yes, she was not helpful in dueling King Midas herself, but for her role, she has done well enough.

Extra credit should be given to Hina for her heroic actions to happen just one night after her failure to confess. When a character was given another chance to shine right after an anti-climax, it could only mean that this character was very, very important. The story of Katsura Hinagiku did not end after the dinner in Athens. Not yet.

Hina’s statement that “A hero is someone who can’t show anyone the tears beneath her mask.” earned full respect from me. It is easy for people to remember and love the victorious Nagi, the self-redeemed Athena or the unharmed Maria, while abandoning the crying hero, but those who understand Hina’s works would just love her more.

If I may suggest, with Hina going to Hayate’s rescue, she achieved an “I helped you once a day” record with regard to Hayate in the Athena saga. Look at the table below which compare the chapter numbers (the left column) with the corresponding dates in the story (the right column): 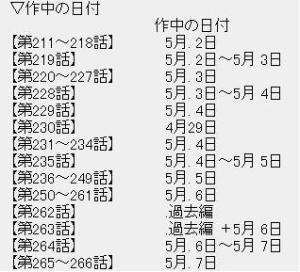 Ironically, although Hayate already gave thanks to Hina for most of the above, he failed to notice the last but most important one. The reason, of course, is that Hayate didn’t know the identity of Silver Red. I want to ask ”Why?” to Hayate and Hata. While Hina could tell “General Jark” and the penguin were Yukiji and Ayumu because of their voices, why couldn’t Hayate recognize that Silver Red was Hina? Why did Hata hide the truth from Hayate?

Surely, Hayate has his choice, but it would be extremely unfair to Hina if Hayate stays with his Ch. 239 assessment.